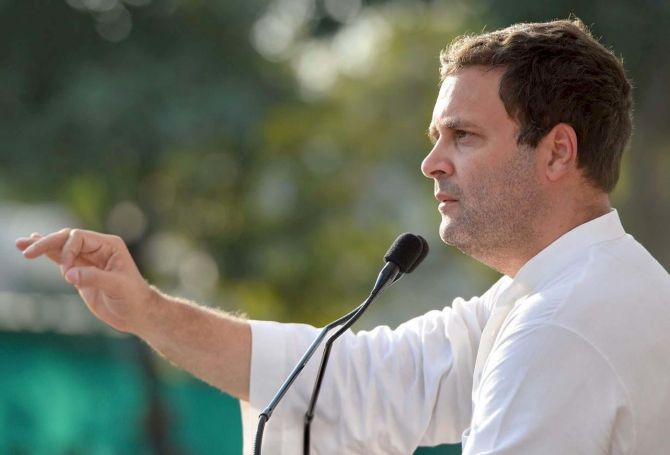 Congress vice-president Rahul Gandhi targeted Prime Minister Narendra Modi in poll-bound Gujarat on Saturday and alleged that the latter did not want the “truth” behind the multi-crore Rafale deal and Jay Shah issue to come out before the assembly election in his home state.

He also alleged that the National Democratic Alliance government was delaying the Winter Session of Parliament as Modi was not ready to discuss the Rafale and Jay Shah issues in the House before the Gujarat polls.

“I would ask Modiji three questions (on the Rafale deal). First, is there a difference in the cost of planes in the first and the second contract (signed with a French firm) and did India pay more or less money as per the second contract?

“And, has the industrialist (whose company has formed a joint venture with the French firm), who was given the contract, ever manufactured planes?” he asked while addressing a public gathering in Gandhinagar.

The Congress leader also sought to know if the due procedure was followed while inking the deal with France last year to procure the Rafale fighter jets.

“And a more important question, did you follow the due government procedure? Why the (then) defence minister was seen catching fish in Goa? And, was an approval from the Cabinet Committee on Security taken (for the mega deal)?” he asked.

Gandhi alleged that the prime minister was avoiding answering these questions due to the fear that the “truth” would come out before the crucial polls in his home state.

“Narendra Modiji is not replying to these questions because he wants that the truth of Rafale and Jay Shah should not come before the public ahead of the Gujarat elections,” he said.

“Rafale is a matter related to the Indian Air Force, national security, martyrs. Modiji will have to answer these questions before the people of the country and Gujarat,” he said.

The 47-year-old Amethi MP said while the mediapersons asked him a lot of questions, they did not do the same with the prime minister over the Rafale and Jay Shah issues.

“Modiji will make many tours of Gujarat. Press reporters ask me various questions. Why don’t you ask Modi about the Rafale deal and Jay Shah? The people should also ask Modiji about Rafale and Jay Shah when he comes to Gujarat,” he said.

The prime minister is scheduled to address a series of poll rallies in Gujarat in support of the Bharatiya Janata Party candidates next week.

The 182-member Gujarat assembly will go to the polls in two phases -- on December 9 and 14. Counting of votes will be taken up on December 18.

“Generally, Parliament’s (Winter) session is held every year in November and discussions (on crucial issues) take place in the Lok Sabha and Rajya Sabha. But, due to two reasons, Parliament is opening after the Gujarat polls this time.

“First, (BJP chief) Amit Shah’s son (Jay) converted Rs 50,000 to Rs 80 crore in three months. Second, and a more important reason, is the Rafale deal. The entire procedure went on for the purchase of the planes and after all the discussions were over, Narendra Modi himself went to France to change the contract,” he alleged.

In September last year, India had inked an inter-governmental agreement with France for the procurement of 36 Rafale fighter jets at a cost of around Rs 58,000 crore.

The Congress had recently raised questions over the deal and accused the Modi-led BJP government of compromising on national interest and security while promoting “crony capitalism” and causing a loss to the public exchequer.

However, the BJP had rubbished the allegations.

Image: Gandhi alleged that the prime minister was avoiding answering these questions due to the fear that the “truth” would come out before the crucial polls in his home state. Photograph: PTI Photo 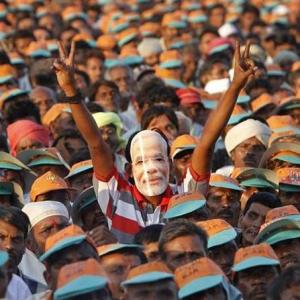