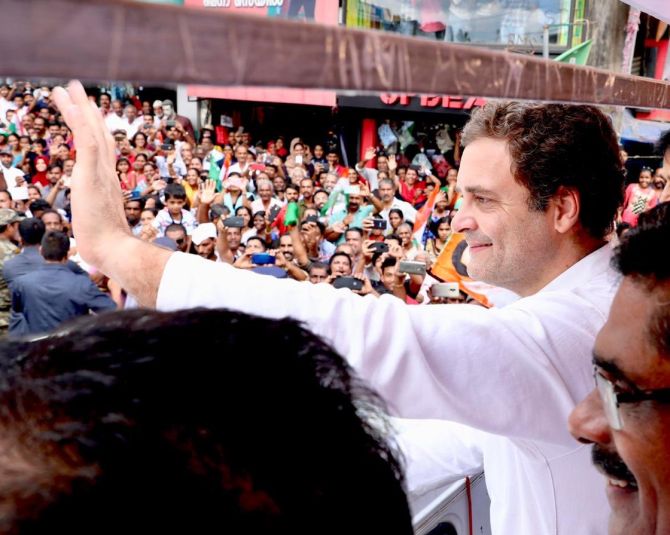 Congress president Rahul Gandhi on Sunday sought to dismiss Prime Minister Naredra Modi's assertion that Kerala was as dear to him as Varanasi, alleging that the PM was meting out step-motherly treatment to non-Bharatiya Janata Party-ruled states and he did not expect any cooperation from him.

In his speech, thanking the voters of the Wayanad Lok Sabha constituency for electing him, Gandhi claimed that the ruling BJP was blinded by 'hatred and anger' and viewed those not following the Rashtriya Swayamsevak Sangh ideology as not Indians, while vowing to fight it.

He was addressing a gathering at Engapuzha near Thiruvambady, a tiny town in Kozhikode district and part of his Lok Sabha constituency, after a roadshow on the third and final day of his thanksgiving visit to Wayanad.

"The prime minister considers BJP-ruled states and non-BJP ruled states differently. I know, he will never consider Kerala the way he considers Uttar Pradesh because the CPI-M (Communist Party of India-Marxist) is ruling here," he said, referring to Modi's speech at Guruvayur in Kerala on Saturday.

After offering prayers at the famous Krishna temple in Guruvayur, Modi had said the BJP was not working for mere electoral politics and that it was keen on building the country and ensuring that India got its place of pride in the international arena.

"Elections have their place in democracy and it is the responsibility of the winner to take care of the 130 crore people. Those who made us win or those who did not, both are our (people). Kerala is as dear to me as Varanasi," he had said, referring to his Lok Sabha constituency in Uttar Pradesh.

The Congress chief, however, said he was not expecting any cooperation from the prime minister and the BJP-led central government for the development of Wayanad and Kerala.

Referring to his Saturday meeting with the CPI-M MLA from Kalpeta, which falls under the Wayanad Lok Sabha constituency, Gandhi said there might be 'ideological differences' (between the Congress and the Left), but those would be set aside and both parties would work together for the development of Wayanad.

But, such cooperation was not coming from the prime minister and the BJP, he charged.

"Because they are blinded by hatred and anger...because either you follow the ideology of the RSS or you are not an Indian.... We will fight that and I promise you that we will not be ruled by Nagpur (where the RSS is based)," Gandhi said.

As in the last two days, hundreds of party workers and locals, including women and children, greeted Gandhi during the roadshow at Engapuzha in the morning.

Several people in the crowd were seen wearing T-shirts with slogans such as 'Rahul we need you' and 'Rahul pada' (army).

Before leaving for New Delhi in the afternoon, Gandhi would take out one more roadshow at Mukkam, near Thiruvambady.

This is the All India Congress Committee president's first visit to Wayanad after his thumping poll victory with a margin of about 4.31 lakh votes.

The Congress-led United Democratic Front swept the parliamentary election in Kerala, winning 19 of its 20 seats.

Besides Wayanad, Gandhi had also contested the polls from his pocket borough of Amethi in Uttar Pradesh. He lost the Amethi poll battle to Union minister Smriti Irani.

After arriving in Kerala on June 7, the Congress chief took out massive roadshows in various parts of his high-range constituency, which spreads over three districts -- Wayanad, Malappuram and Kozhikode.

He accepted memorandums and complaints from people and spent time listening to the grievances of representatives of tribals and farmers at the Wayand district collectorate on Saturday.

During his roadshows, Gandhi lashed out at Modi and assured the people that he would raise the issues of not only Wayanad, but of entire Kerala in Parliament.

Reviving his attack on Modi after the polls, he alleged that the prime minister's election campaign was filled with 'lies, poison and hatred', while his party stood for 'truth, love and affection'.

Gandhi's visit to Kerala came days after he offered to resign as the Congress president in view of the party's dismal showing in the second consecutive general election. But the offer was rejected by the Congress Working Committee, the highest decision-making body of the party.

Joining issue with Prime Minister Narendra Modi over his appeal to it for joining Ayushman Bharat, the Left Democratic Front government in Kerala has said the state is already a member of the Centre's health insurance scheme and the PM has 'misunderstood' it.

Asking the prime minister to correct himself, state Health Minister K K Shylaja said that in fact, the Kerala government had extended its coverage from 18.5 lakh families to 41 lakh families by integrating the other existing schemes under the title 'Karunaya Arogya Surakha Scheme'.

Speaking at a BJP meeting in Guruvayur on Saturday, Modi urged the Pinarayi Vijayan government in Kerala to implement the flagship health insurance programme of the Centre.

Reacting to it, Shylaja, in a statement here, said Kerala was already a member of the scheme.

She pointed out that Modi had said it was unfortunate that Kerala did not join the scheme and therefore, many poor people of the state would not get its benefits.

"The prime minister has misunderstood the state in this regard; he may correct his statement since Kerala is a member of the scheme and signed the MoU (Memorandum of Understanding) on November 2, 2018," the health minister said.

She further said the state had received Rs 25 crore as the first installment (from the Centre) and Chief Minister Vijayan had inaugurated the state-wide distribution of health cards under the scheme on March 5.

The minister also said the state had registered 17 lakh beneficiaries under the scheme and 1.46 lakh people were given treatment for various diseases.

However, she added that the southern state had apprehensions about the scheme as it covered only 18.5 lakh families, leaving out many deserving people.

"Therefore, the Kerala government expanded and strengthened the implementation of the project by adjoining other existing health insurance schemes into it under the title -- Karunaya Arogya Surakha Scheme, which comprises 41 lakh families," Shylaja said.

Billed as the biggest government-sponsored healthcare scheme in the world, Ayushman Bharat was launched by the Modi government in September last year, envisaging a coverage of Rs five lakh per family annually to more than 10 crore poor families.