Rafale will be game-changer, govt had no role in selecting partner: IAF chief

Air Chief Marshal B S Dhanoa described the decision to buy the Rafale fighter jets as a "bold move" by the government and said it was an "emergency purchase" keeping in view the depleting squadrons of the Air Force. 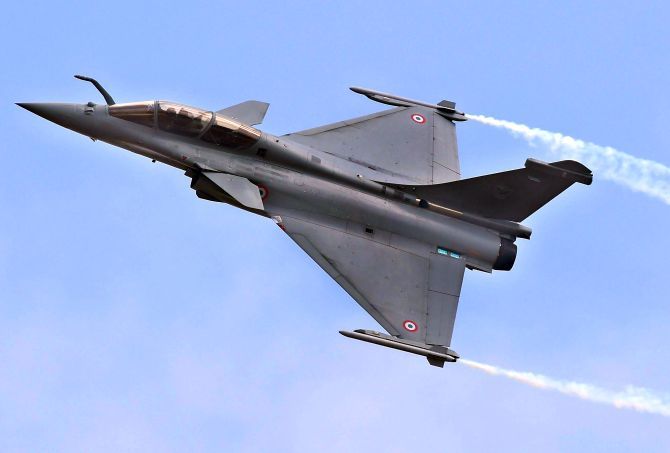 Defending the Rafale fighter jet amid a raging political row, Air Chief Marshal B S Dhanoa on Wednesday termed the deal a "good package" and said the aircraft will be a "game-changer" for the subcontinent.

He said the S-400 air defence missile systems, a deal for which is likely to be signed later this week after Russian President Vladimir Putin arrives in India on Thursday, and the 36 Rafale jets will provide the Air Force with a much needed "booster".

Addressing a press conference in New Delhi, Dhanoa described the decision to buy the Rafale fighter jets as a "bold move" by the government and said it was an "emergency purchase" keeping in view the depleting squadrons of the Air Force.

In response to a question on Rafale maker Dassault Aviation choosing Reliance Defence over state-owned Hindustan Aeronautics Limited, Dhanoa said it was the "prerogative" of the original equipment manufacturer to choose the offset partner and neither the government nor the Air Force had any role in it.

The Congress and other opposition parties have claimed massive irregularities in the Rafale fighter jet deal and the issue has been gathering steam ahead of three crucial state polls and Lok Sabha polls next year. The BJP and Reliance Defence have dismissed all the allegations as false.

Dhanoa said the Rafale is a "very good aircraft".

"When it comes to the subcontinent, it will be a game-changer because it has significant capabilities, better than what our regional adversaries have got. It takes care of even the new aircraft they (adversaries) are likely to induct in near future," he said.

"We have a very good package along with the aircraft," the Air Force chief added.

"We have a lot of advantages in the Rafale deal," Dhanoa said.

Responding to a question on whether the Air Force was consulted before going ahead with the government to government deal to buy 36 Rafale jets, Dhanoa said it was consulted at an "appropriate level".

He said the medium multi-role combat aircraft deal to buy 126 aircraft, where Rafale was the lowest bidder, had reached an "impasse" due to "irresolvable differences" between HAL and Dassault Aviation over HAL's additional man hours in production of the aircraft and the resultant cost increase.

The MMRCA deal was discussed during the UPA regime and scrapped by the NDA.

"The available options were analysed. We had choices -- one, to continue indefinitely to resolve the difference between Dassault Aviation and HAL; cancel RFP (Request for Proposal) and restart the process," Dhanoa told reporters.

Considering another variant at this stage will require a few more years, he said.

One squadron has about 18 aircraft.

Dhanoa acknowledged HAL's support to the Air Force but said there has been a "slight lag" in the public sector unit's delivery schedule.

The Cost Negotiating Committee for the Rafale deal comprised people with "good and balanced judgment", he said when questioned on reports that some members of the panel had raised concerns over the price.

"All those things were discussed and the observations that were there were adequately addressed and only then it was decided that yes, the cost of the 36 aircraft was reasonable. How can you assume they will sign a contract many times more than the cost we already know? It is slightly awkward," he said.

He parried questions on the cost of the fighter jets.

"Rafale cost...we are going by the FM (finance minister). There are some other costs, it is based on guesstimates...a lot of things can change. Inflation changes. Rupee is going down... You will come to know once the deal is over, how much money we managed to save," the Air Force chief said.

Dhanoa did not comment on whether the S-400 deal would be signed later this week, but said he does not think that the Countering America's Adversaries Through Sanctions Act will have any impact on the deal.

CATSA is a US legislation that mandates the country to punish entities from dealing in areas of defence with nations like North Korea, Russia and Iran.

India has conveyed to the US that it is going ahead with the S-400 deal with Russia.

Last month, Francois Hollande, who was French president when the Rs 58,000 crore Rafale deal was announced, was quoted as saying by French publication Mediapart that France was given "no choice" on selection of the Indian partner for Dassault, the manufacturer of Rafale jets.

The Indian government proposed the name of Reliance as offset partner for the French aerospace giant, he said.

Meanwhile, Congress president Rahul Gandhi took a swipe at the Modi government and Anil Ambani over the Rafale issue, saying that in order to bag India's biggest defence contracts one has to be a "defaulter of Rs 45,000 crore" and have "no relevant experience".

Gandhi also cited a media report claiming that Swedish telecom equipment company Ericsson has petitioned the Supreme Court to prevent Ambani and two senior executives from his group from leaving the country after accusing them of willfully defaulting in previously promised payment of Rs 550 crore by alleged abuse of process of law.

"Modi's Operandi for handing out India's biggest defence contracts -- 1. Be a defaulter of 45,000 crore. 2. Owe money to other companies who beg Supreme Court not to let you leave India. 3. Be called 'Bhai' by PM but have no relevant experience," Gandhi said in a tweet and tagged the media report. 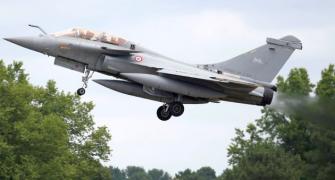