The Congress’s new treasurer Ahmed Patel has been meeting industrialists and businessmen. He met one of the biggest industrialists of the country last week, but the assurance of any significant donation was half-hearted from the other end. 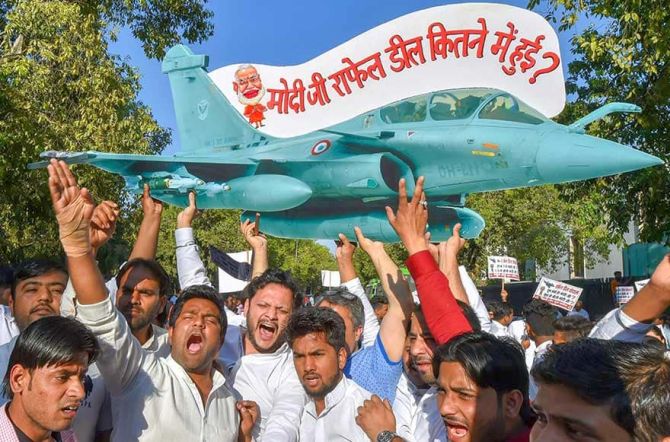 Cash-starved and with fewer business houses willing to bet on it, at least not for the forthcoming assembly polls to five states, the Congress on Saturday launched its crowdfunding efforts to finance its Rajasthan assembly election campaign.

The website (external link) showed the Congress collected nearly Rs 200,000 by the end of Sunday, which it said was one per cent of what it hoped to collect during the 77-day campaign.

Party leaders concede that it would be unrealistic to expect the Congress to contest the Rajasthan assembly polls within Rs 20 million, but point to the party’s empty coffers that has meant fewer funds for travel and events.

According to a source, the National Students Union of India, the party’s students wing, didn’t have sufficient money to fund its recently-concluded Delhi University Students’ Union polls, and was surprised that the eventual results were close.

During the Gujarat polls, the Congress asked leaders from across the country to reach the state to help in the campaign, but could only fund their train travel, when air travel has been customary for the workers of the once-mighty political party, and put them up in dingy hotels.

Several state and district units do not have money to fund their daily activities, which has meant cutting down on money for tea and snacks for guests, including local journalists, and travel by air.

In some cases, bringing in resourceful party leaders, for example the appointment of Niranjan Patnaik as the Odisha party unit chief, has helped galvanise the party.

Madhya Pradesh unit chief Kamal Nath is also expected to show his usual resourcefulness to help the party’s election campaign in that state.

Nath has the added headache of raising money for the equally cash-starved Bahujan Samaj Party, the Congress party’s potential ally in that state.

According to party sources, the Congress’s new treasurer Ahmed Patel has been meeting industrialists and businessmen.

He met one of the biggest industrialists of the country last week, but the assurance of any significant donation was half-hearted from the other end, sources said.

If compared with what the Bharatiya Janata Party has received, money through electoral bonds has also been a trickle to the Congress, and non-existent to other parties.

But party sources are hopeful of it all changing for the better if it were to win at least some of the states going to polls.

Rajasthan, Chhattisgarh, Madhya Pradesh, Mizoram and Telangana are scheduled to go for polls in December.

Rajasthan is the best opportunity the Congress has to defeat the BJP, or so the party believes, and recent poll surveys bear it out.

This is the third such effort by the party, and its most ambitious to date.

Spandana had raised nearly Rs 1.1 million for party candidate Yogesh Babu to contest against the BJP’s B Sreeramulu, a close confidant of the Reddy brothers, during the Karnataka assembly polls.

The party’s second fundraising campaign was to offer support to 30-year-old Muktikant Biswal, who had walked 1,350-km from Odisha to Delhi to “remind Prime Minister Narendra Modi of a promise he had made” to the people of his village in Rourkela of a super-specialty hospital.

In his appeal, Rajasthan state unit chief Sachin Pilot said: “The BJP has enough money, power and resources, they don’t lack anything. However, the Congress believes in politics of principles and will create a better future for the youth and farmers of Rajasthan.”

The Congress campaign states the equation is now well known. “It’s the BJP’s cash power versus people’s power. During Karnataka polls earlier this year, the BJP spent over Rs 3 billion on advertising alone and thousands of millions on the state election.”

“On the one hand you have BJP's billionaire friends giving them thousands of millions of rupees to control the media and public opinion, while on the other hand you have distressed farmers, women, jobless youth and citizens struggling to make a living,” it states.

The recent campaign against industrialist Anil Ambani has also made some of the big businesses wary of the party, and has meant the party having to reassure them.

But the Congress chief has asked party leaders to not relent on their attack on the industrialist and the Rafale “scam”.

He has also asked senior lawyers associated with the party that they shouldn’t take up Ambani’s court cases.