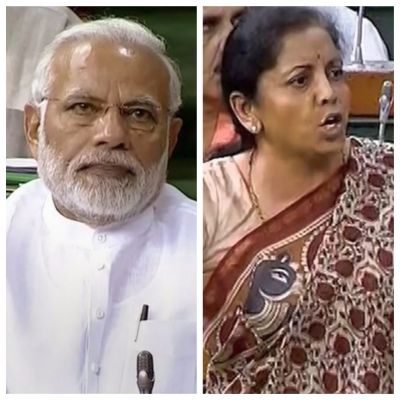 The Congress on Tuesday gave notices for bringing a privilege motion against Prime Minister Narendra Modi and Defence Minister Nirmala Sitharaman in the Lok Sabha for “misleading” the House on the Rafale deal.

In the notices, the party said Modi and Sitharaman’s contention in Lok Sabha on Friday that a 2008 agreement between India and France prevented the government from revealing the price details of the deal was not correct.

The notices were given to Lok Sabha Speaker Sumitra Mahajan by leader of the Congress in Lok Sabha Mallikarjun Kharge, Veerappa Moily, K V Thomas, Jyotiraditya Scindia and Rajeev Satav over the statements made by Modi and Sitharaman during the debate on the no-confidence motion.

According to procedure, it is for the speaker to decide whether to refer the matter to privilege committee or not.

Justifying its move, the Congress said the 2008 agreement does not state that commercial costs of procurement of defence deals cannot be revealed and that both the prime minister and defence minister mislead the parliament and the nation on the issue.

The Congress has been demanding price details of the Rs 58,000 crore deal the Modi government had signed with France in 2016 for procurement of 36 Rafale fighter jets. The party claimed that the per aircraft price under the deal came to Rs 1,600 crore as against the Rs 520 crore negotiated during the United Progressive Alliance.

The government has refused to divulge the detailed price of each aircraft citing a secrecy clause in the Indo-French pact.

In its notice for bringing the privilege motion against Modi, the Congress said the French government, in its statement, nowhere mentioned that the prices of the Rafale jets cannot be disclosed, adding that it had merely referred to the 2008 Confidentiality Agreement between the two countries.

The French government had issued a statement on Friday after Congress chief Rahul Gandhi raised the Rafale deal issue in Lok Sabha during the debate on no confidence motion.

The prime minister was fully aware that the 2008 Confidentiality Agreement is regarding defence cooperation, including acquisition, purchase and transfer of technology, between the two countries, the notice submitted to the Speaker said.

The 2008 agreement does not state that ‘commercial costs’ of procurement of defence deals cannot be revealed, it said.

“Article 1 of the 2008 agreement clearly defines ‘classified information and material’ as ‘material which requires protection...in the interest of national security’,” the notice said.

It is not specific to the Rafale jet fighters and nowhere prohibits the disclosure of purchase price to Parliament, the party argued in the letter.

The prime minister’s claim of transparency in the agreement is factually incorrect, untrue, and deliberately made with the intention to mislead the House, according to the notice.

The prime minister and his cabinet, as per the Constitution, are collectively accountable to Parliament and through it to the people of the country, it said.

The notice also said that the government, through the Minister of State for Defence, had on November 18, 2016, in reply to a question in Lok Sabha, revealed the price of Rafale aircraft as approximately Rs 670 crore.

Again on March 19, 2018, the price was disclosed by the Minister of State for Defence in Rajya Sabha, it claimed.

The prime minister, in his speech, endorsed the defence minister’s claims, which contradicted the reply of his minister of state for defence, the opposition party claimed.

The defence minister had knowingly and intentionally misled Parliament by withholding the information that the government is obliged to reveal to Parliament, the notice against Sitharaman said.

It alleged that Sitharaman’s assertions on the floor of the House were “absolutely false”.

“The honourable member has wilfully misled not only members of the House, but also the entire nation,” the notice alleged.