In a major relief to Congress MP Shashi Tharoor and six journalists including Rajdeep Sardesai, the Supreme Court on Tuesday stayed their arrest in connection with the FIRs lodged against them for their allegedly "misleading" tweets on the violence during the farmers' tractor rally here on the Republic Day. 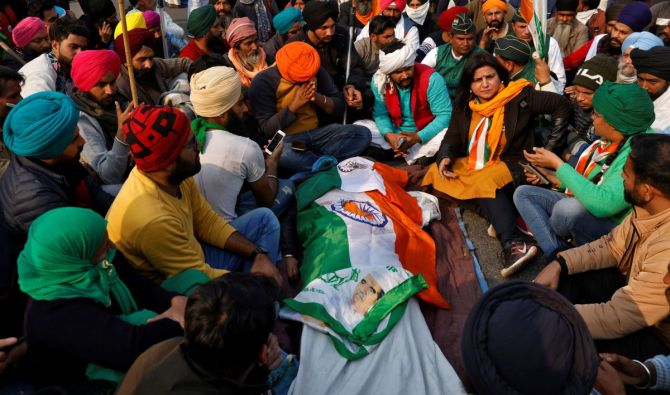 IMAGE: Farmers sit around the body of a person who died during a tractor rally to protest against farm laws on Republic Day. Photograph: Danish Siddiqui/Reuters

“Issue notice returnable in two weeks. In the meantime, there shall be stay of arrest of the petitioners,” the bench headed by Chief Justice S A Bobde noted in its order after senior advocate Kapil Sibal, appearing for the lawmaker from Thiruvananthapuram in Kerala, expressed the looming danger of danger arrest.

When the bench said it was issuing notice in the matter, Sibal vehemently pleaded that an order with an effect that no coercive action be taken against them in the meantime be also passed.

“Nothing is going to happen. Where is the danger,” said the bench, also comprising Justices A S Bopanna and V Ramasubramanian.

Sibal objected and said Solicitor General Tuhsar Mehta is appearing for Delhi Police and the cops of other states might “knock at my doors and arrest me in the meantime”.

"Kindly protect us in the meanwhile," Sibal said, prompting the bench to ask the law officer whether the police was planning to arrest Tharoor and others.

Mehta, seeking to argue the case on Wednesday, alleged: “Horrendous tweets have been made,” the law officer said, adding, “I can show you what horrendous effect these tweets have with such lakhs of followers”.

The bench asked Mehta, “Are you going to arrest them?”.

The solicitor general said, “I am before your lordships. Please hear it tomorrow”.

The bench then asked Mehta whether he was appearing for all the concerned states.

Sibal, while arguing that petitioners should be protected, said, “What prejudice will it cause if this protection is given?”

“We will hear you after two weeks and stay the arrest in the meanwhile,” the bench said.

Senior advocate Mukul Rohatgi, appearing for one of the journalists, said no religious sentiment has been hurt and it was a January 26 report on some person being allegedly shot and then it was corrected to something else.

The top court has issued notices to the Centre, Delhi, Uttar Pradesh, Madhya Pradesh, Haryana and Karnataka governments on the pleas filed by Tharoor and others.

On January 30, Delhi Police had filed a case against Tharoor, Sardesai and others.

Earlier, Tharoor and the six journalists were booked by Noida Police for alleged sedition, among other charges, over the violence during the farmers' tractor rally in Delhi, officials had said.

Madhya Pradesh Police had also filed a case against Tharoor and the six journalists over their alleged ''misleading'' tweets on the violence during the farmers' tractor rally in Delhi.

Tharoor has moved the apex court, through advocate Sandeep Kapur, challenging the registration of multiple FIRs against him for his tweet on the January 26 violence in Delhi.

FIRs have been lodged for offences such as sedition and creation of communal disharmony.

One of the FIRs, lodged at Noida, alleged the actions of the Tharoor and others on social media that a farmer had been shot dead by Delhi Police during the tractor rally led to the siege of the Red Fort and violence.

The FIR at Noida said the accused, through their "fake, misleading and wrong" tweets, tried to imply that the death of the farmer was caused by the violence committed by Delhi Police.

On January 26, thousands of protesting farmers had clashed with the police in the national capital during the tractor rally called by the farmer unions demanding repeal of the three new farm laws passed by the Centre.