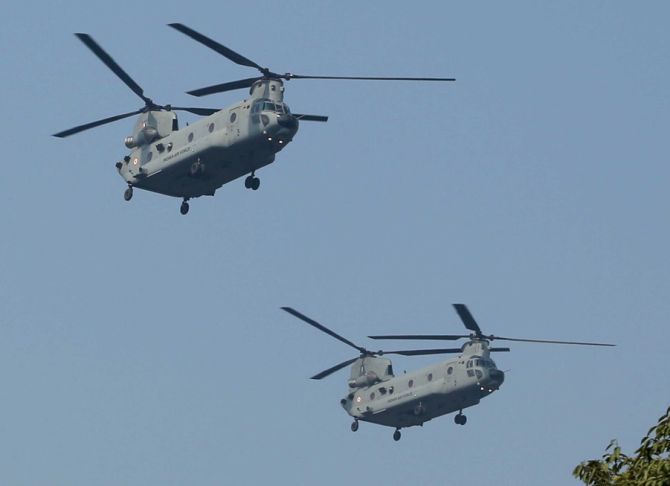 While the Indian arsenal continues to field large number of legacy Russian weapons platforms, the new weaponry being inducted is mainly of US or Indian origin.

In contrast, the parade featured only three Russian aircraft -- the Sukhoi-30MKI and MiG-29UPG fighters and the Mi-17V5 medium-lift helicopter. Russian Ilyushin-76 and Antonov-32 transport aircraft also remain in the Indian Air Force's fleet, but were absent, with the more contemporary American C-130J and C-17s being preferred for the parade.

There was also a significant participation by Indian-built aircraft, including the Dhruv advanced light helicopter, its weaponised version called the Rudra, Dornier light transport aircraft, and Jaguar fighter-bombers -- all built by Hindustan Aeronautics.

The Netra, an airborne early warning and control system aircraft, developed by the Defence Research and Development Organisation on a Brazilian Embraer business jet, was also showcased.

The IAF has finalised, and is shortly slated to sign with HAL, an approximately Rs 26,000 crore order for 83 Tejas Mark 1A fighters.

Ground systems participation, which has traditionally featured a large number of Russian weapons platforms, was noticeably biased towards indigenous and non-Russian weaponry too.

The only Russian ground systems featured were the T-90S Bhishma tank and BMP-2 infantry combat vehicle.

There was a strong Indian flavour to missile and air defence systems as well.

There was a debut appearance for the DRDO-developed Anti-Satellite Weapon, which was ostentatiously tested last March in the so-called Mission Shakti -- arousing international criticism for allegedly creating space debris. In the air defence arena, dominated by a range of Russian missiles for half a century, this year's parade featured only DRDO's Akash missile system.

However, a new Russian air defence system could well occupy centre stage in next year's parade, with delivery of the first Russian S-400 Triumf missile units slated for late 2020.

India has defied strong pressure from Washington in going ahead with the purchase of five S-400 units from Russia for $5.43 billion.

In addition to the large number of weapons systems that debuted in this year's parade -- including the Chinook and Apache helicopters, the K-9 Vajra-T and the DRDO's promising Astra missile -- the military scored two other significant firsts on January 26, 2020. 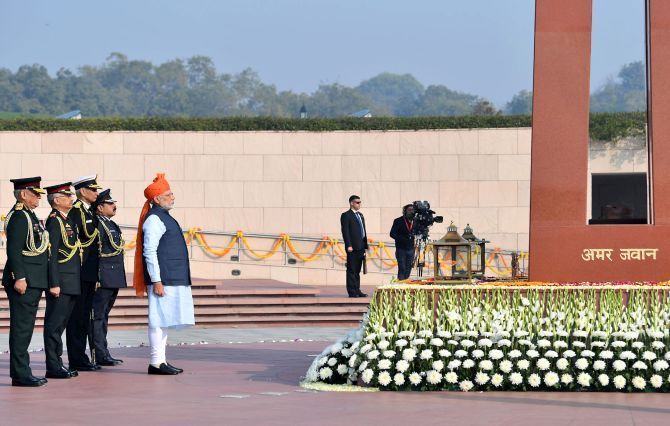 For the first time, Prime Minister Narendra Damodardas Modi paid homage to soldiers, sailors and airmen who laid down their lives for the country at a new location -- the National War Memorial that was inaugurated last February.

Also unprecedented was the presence of a tri-service chief -- the newly created appointment of the chief of defence staff, to which former army chief, General Bipin Rawat, was appointed on the new year.

The prime minister and President Ram Nath Kovind were, for the first time, received by four general rank officers -- the CDS and the three service chiefs.