Shia personal law board to meet over Rizvi's Quran PIL

More Muslim organisations on Wednesday slammed former UP Shia Waqf Board chairman Waseem Rizvi, while his family members appeared to shun him for his PIL in the Supreme Court seeking the removal of some Quranic verses. 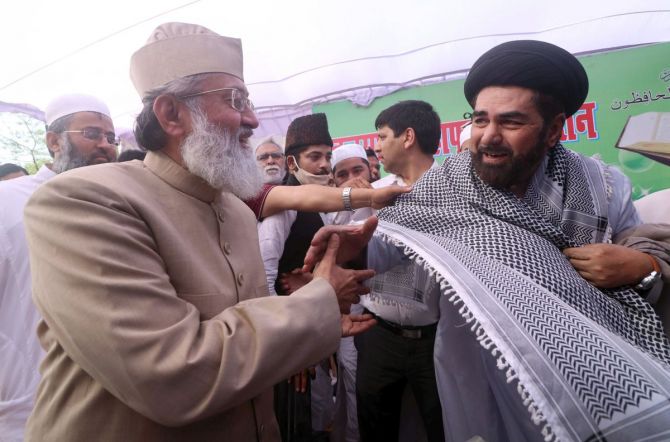 The All India Shia Personal Law Board has called an emergency meeting on Thursday to discuss the issue and decide on a plan of action, its spokesperson Maulana Yasoob Abbas said.

Terming the incident a test of patience of the entire community, Abbas said, "Despite this, no action has been initiated against Rizvi. This is a big question in itself. The petition filed by Waseem Rizvi is an insult to Muslims of the entire world, and it has hurt them significantly."

Senior member of the All India Muslim Personal Law Board Maulana Khalid Rasheed Farangi Mahali asked why no action has been initiated in the case, and added, "Whose patronage is Rizvi getting? Rizvi has broken all the limits by raising a finger on the Quran. The government must initiate stringent action against Rizvi for playing with the sentiments of a large section of people of the country."

Meanwhile, Rizvi's family members appeared to distance themselves from him.

In a purported video, Waseem Rizvi's younger brother Zaheer Rizvi said, "I, my mother, my brother and my sister do not have any relationship with Waseem Rizvi. Nor do we want to have a relationship with him. He has nothing to do with Islam, hence he is speaking like this. He is saying this at the behest of someone. I do not want to get into this."

"Waseem Rizvi has committed a grave sin. Allah will protect the Quran, and not a single point from it can be removed. There were attacks on the Quran in the past as well, but every time Allah protected it," Zaheer Rizvi added.

An FIR was registered against him in Bareilly on Monday evening for allegedly hurting religious sentiments of Muslims across the country with his petition.

On Tuesday, chairman of the Raja Action Committee, Maulana Afroz Raja Qadri, claimed sectarian forces were operating behind Rizvi, and that time has come to unmask them.

Members of the Muslim community held a protest in Lucknow against Rizvi on Sunday. Shia cleric and senior member of the All India Muslim Personal Law Board Maulana Kalbe Jawwad and a large number of people took part in the protest at the Bara Imambara.

Jawwad then urged the government to immediately arrest Rizvi and impose a heavy fine on him.

In Bareilly, Mufti Ahsan Raja Qadri of the Dargah-e-Aala Hazrat, a prominent centre of Barelvi Muslims, too had condemned Rizvi's move and said not even an iota of change in the holy book was possible.