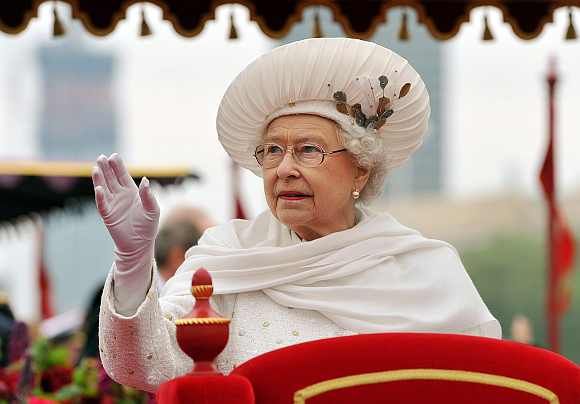 A lunch with Queen Elizabeth II, an address to the Indian diaspora at the iconic Wembley Stadium and a "warm" interaction with his British counterpart is part of the hectic schedule of Prime Minister Narendra Modi's maiden visit to the United Kingdom next month.

British Prime Minister David Cameron is expected to be by Modi's side through most of his engagements during the much-anticipated three-day visit, beginning November 12, which is also expected to include an overnight stay at his country residence Chequers.

"He (Cameron) has a very warm relationship with the Indian PM. This visit will demonstrate the strength of that unbeatable combination of our two leaders," said Priti Patel, Cameron's Indian Diaspora Champion and employment minister who will play a central role during the visit.

The British side is keen to highlight the warmth of the relationship between the two countries, which comes soon after the pomp and ceremony attached to the state visit of Chinese President Xi Jinping earlier this month.

While a ceremonial ride in a gilded carriage with the Queen associated with an official state visit will be missing for Modi, the more intimate setting of a lunch with Her

Majesty on the afternoon of November 13 is being stressed upon as an indication of the closeness of the ties between India and the UK.

Soon after BuckinghamPalace, Modi will arrive for his Olympic-style welcome at Wembley Stadium, which has been sold out as the public registration process came to a close last night.

"The event is the highlight of Prime Minister Modi's visit to the United Kingdom next month and we have had an unprecedented response. People from all over the UK have applied for a seat, the youngest being two years old and the oldest is 92," said a spokesperson for the Europe India Forum, the organisers of the 'Two Great Nations. One Glorious Future' event to be attended by over 60,000 people.

After his arrival in the UK, Modi will head straight for Downing Street for a meeting with Cameron. The two leaders are then expected to walk up a few steps to the Mahatma Gandhi statue in Parliament Square, which was unveiled earlier this year. Modi is then expected to interact with Indian-origin and other parliamentarians at a reception hosted by the Speaker in the British Parliament.

The business part of Modi's engagements will include an interaction over a banquet at the Guildhall, expected to be hosted by the Lord Mayor of London on November 12.

A visit to the TataMotors-ownedJaguarLand Rover factory in the West Midlands region is likely to be squeezed in, based on availability of time. On November 14, Modi will unveil the new Ambedkar memorial in north London as well as a new statue of 12th century philosopher Basaveshwara before leaving for Ankara to attend the G20 summit.