Terming the Quad alliance between the United States, India, Australia and Japan as a 'tool' to contain China's rise, Beijing said on Friday that the grouping is a 'deliberate move' to stoke confrontation and it is doomed to fail. 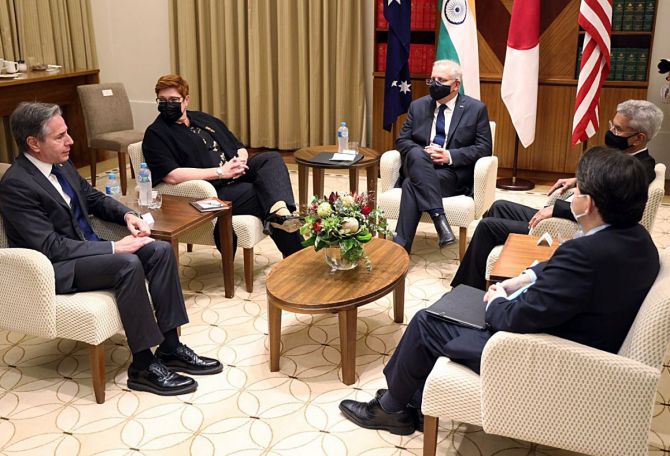 China, which has territorial disputes with many countries in the strategic Indo-Pacific region, has been opposing the Quad alliance since its formation.

In November 2017, the US, Australia, India and Japan gave shape to the long-pending proposal of setting up the Quad to develop a new strategy to keep the critical sea routes in the Indo-Pacific free of any influence, amid China's growing military presence in the strategic region.

"China believes that the Quad mechanism is only a tool to contain China," Chinese Foreign Ministry spokesman Zhao Lijian told a media briefing here while responding to a question that Quad foreign ministers opened their talks in Melbourne, saying that the countries need to stand up those who seek to coerce them raising the long-term issue of China's rising power.

"This is a deliberate move to stoke confrontation and undermine international solidarity and cooperation," he said.

"I want to stress that the Cold War is long gone and any attempt to create an alliance as aimed containing China will not be popular and such moves are doomed to fail," he said.

"Relevant countries should abandon the outdated Cold War mentality to correct their wrong practices of advancing bloc confrontation and geopolitical rivalry. Instead, they should play a constative role to promote peace and stability in the Asia Pacific region," he said.

"We hope the US and other countries concerned will grasp the trend of the times, adopt a proper mind-set and discard the Cold War mentality," he said.

The foreign ministers of the Quad grouping on Friday held extensive talks in Melbourne amid escalating tension between Russia and NATO countries over Ukraine, the Afghan crisis and increasing concerns over China's 'coercion' in the Indo-Pacific region.

At a joint media briefing after the talks, Australian foreign minister Payne said the Quad foreign ministers reaffirmed their support to principles of openness, protection of national sovereignty and observance of rules and fair play, in remarks seen as a message to China.