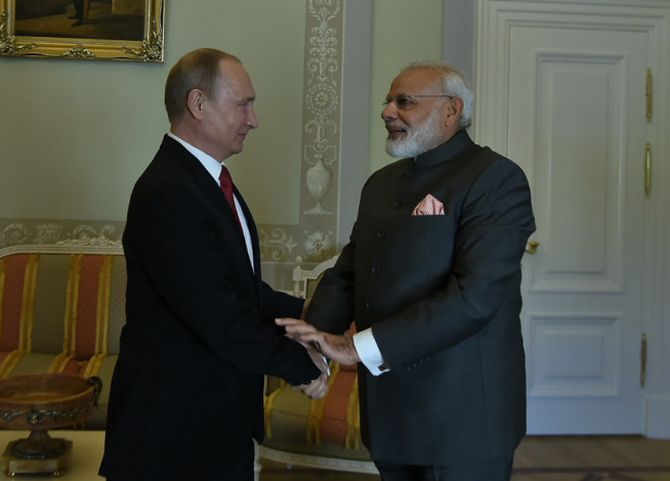 They both are strong leaders with cult-like following. But when Prime Minister Narendra Modi met Vladimir Putin he stuck a very personal chord when he recalled how the Russian President's brother was among several family members who had laid down their lives for the country.

Meeting 64-year-old Putin for the second time in eight months, Modi in his opening remarks mentioned his visit to the Piskariovskoye Cemetery where over five lakh victims of World War II and the 900-day siege of Leningrad are buried.

"I had an opportunity to visit (the cemetery) and pay homage to those who laid down their lives for Russia," 66-year-old Modi said.

Looking at Putin, he said, 'you are a political leader whose family has made sacrifices' for the glory of Russia.

"Your brother was martyred," he said, referring to Putin's brother Viktor who died more than 70 years ago during the siege of Leningrad. 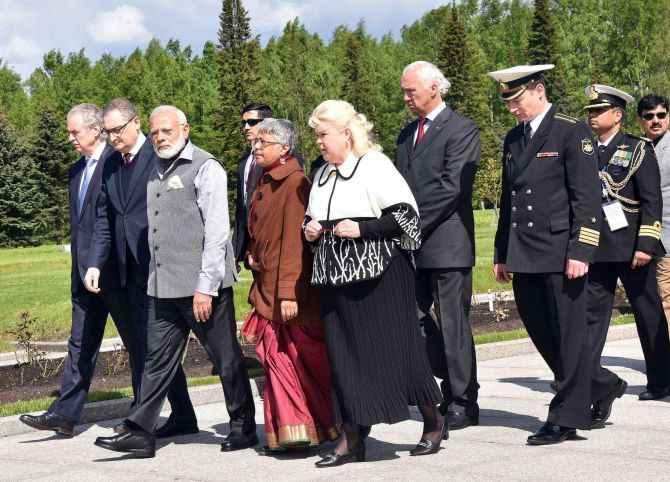 IMAGE: In the morning, the prime minister paid a visit to Piskarovskoye Memorial Cemetery in St Petersburg where over five lakh victims of World War II and the Siege of Leningrad are buried.

According to an account Putin gave to Russkiy Pioner magazine in 2008, his father had six brothers -- five of whom were killed during the 1941-1944 war, along with some of his mother's relatives.

During the two-year-four-month siege, Leningrad -- which was renamed Saint Petersburg, its original name, in 1991 -- water and power supplies were cut off, and disease was rife as a Nazi Germany blockade stopped essential humanitarian supplies, including food, from entering the city.

Putin had told the magazine how his emaciated mother was carried out of a crumbling building on a stretcher close to death, after two-year-old Viktor, died from diphtheria and starvation, following months of siege and violent war.

Putin's other brother, Albert, was born in the 1930s but died in infancy.

Putin, who was born in 1952, seven years after the siege ended in 1944, thanked Modi for visiting the cemetery.

"I would like to thank you specially for visiting Piskariovskoye," he said. "Places like these have special significance for the Russian people. Thank you."

Putin is known for rarely showing his emotions but he appeared moved when Modi mentioned the sacrifices made by his family. Modi and Putin held wide-ranging talks on bilateral, regional and international issues of mutual interests, including ways to boost energy and trade ties.

At the beginning of their restricted meeting, Modi told Putin he was happy to be able to visit his hometown as prime minister. This is for the first time Indo-Russia summit in Russia was happening outside Moscow.

"Normally, international relations see ups and downs but history is witness Indo-Russia relations have not seen any ups and downs," the prime minister said and thanked the Russian president for playing crucial role in getting India Shanghai Cooperation Organisation membership.

"India, Russia friendship is very old, deep and based on trust. India and Russia have always been together on international issues," he said.

"I thank you for all the initiatives taken," Modi said.

Putin said India will become a full-fledged member of the SCO in a week.

Welcoming Modi, Putin said, "The most important thing is the trust and friendship in our relationship between our countries and our people."

"I am glad to have this opportunity to meet you and discuss the whole spectrum of bilateral relations and international relations," the Russian president told Modi. 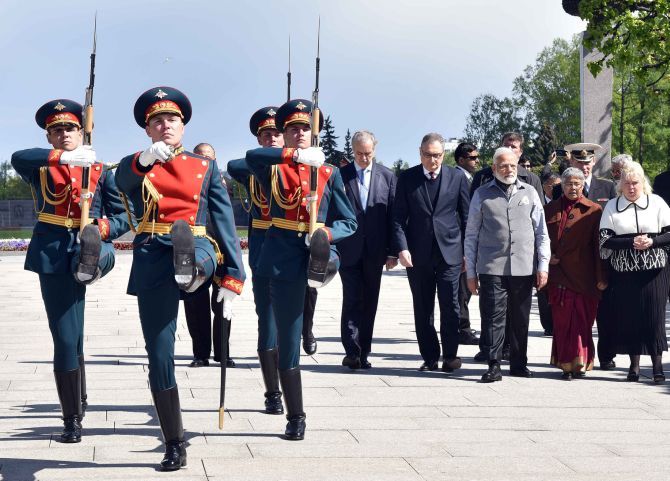 IMAGE: Mentioning his visit to Piskarovskoye Memorial Cemetry, Modi told Putin that 'you are a political leader whose family has made sacrifices' for the glory of Russia.

"As far as our international cooperation goes, one thing I would like to point out, in one week, India is becoming full fledged member of the SCO," he said.

"I would like to remind that process was launched in 2015 in Ufa, Russia. Russia has always supported this and given full assistance to it," Putin said.

The SCO is a political, economic, and military bloc founded in 2001 in Shanghai by the leaders of China,

Kazakhstan, Kyrgyzstan, Russia, Tajikistan, and Uzbekistan. 'Very soon, in one week, we are going to meet in Kazakhstan (for SCO)' where India's membership will be confirmed, he told Modi.

Putin noted that this year Russia and India mark the 70th anniversary since establishing diplomatic relations.

The two sides are expected to sign 12 agreements in wide-ranging sectors, including in science and technology, railways, cultural exchanges and other business areas between private parties also, in addition to a 'vision statement' that the two leaders will release.

They are likely to ink a deal to build the last two units of India's largest nuclear power plant in Kudankulam. 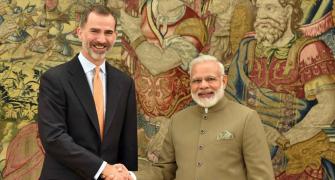 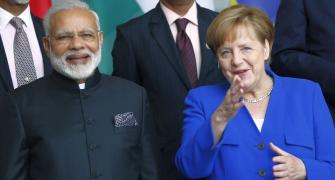 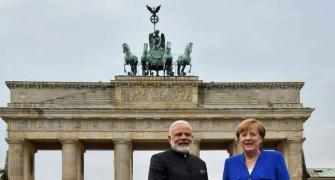 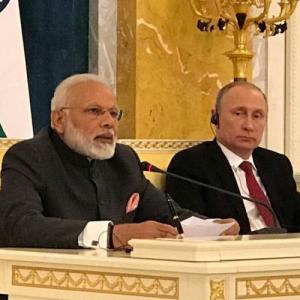 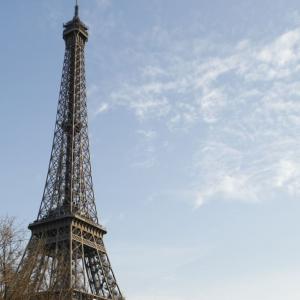