Pushkar Singh Dhami to be Uttarakhand's 3rd CM in 4 months

Pushkar Singh Dhami will be the new chief minister of Uttarakhand following his election on Saturday as the leader of the Bharatiya Janata Party legislature party in the hill state where assembly polls are due next year. 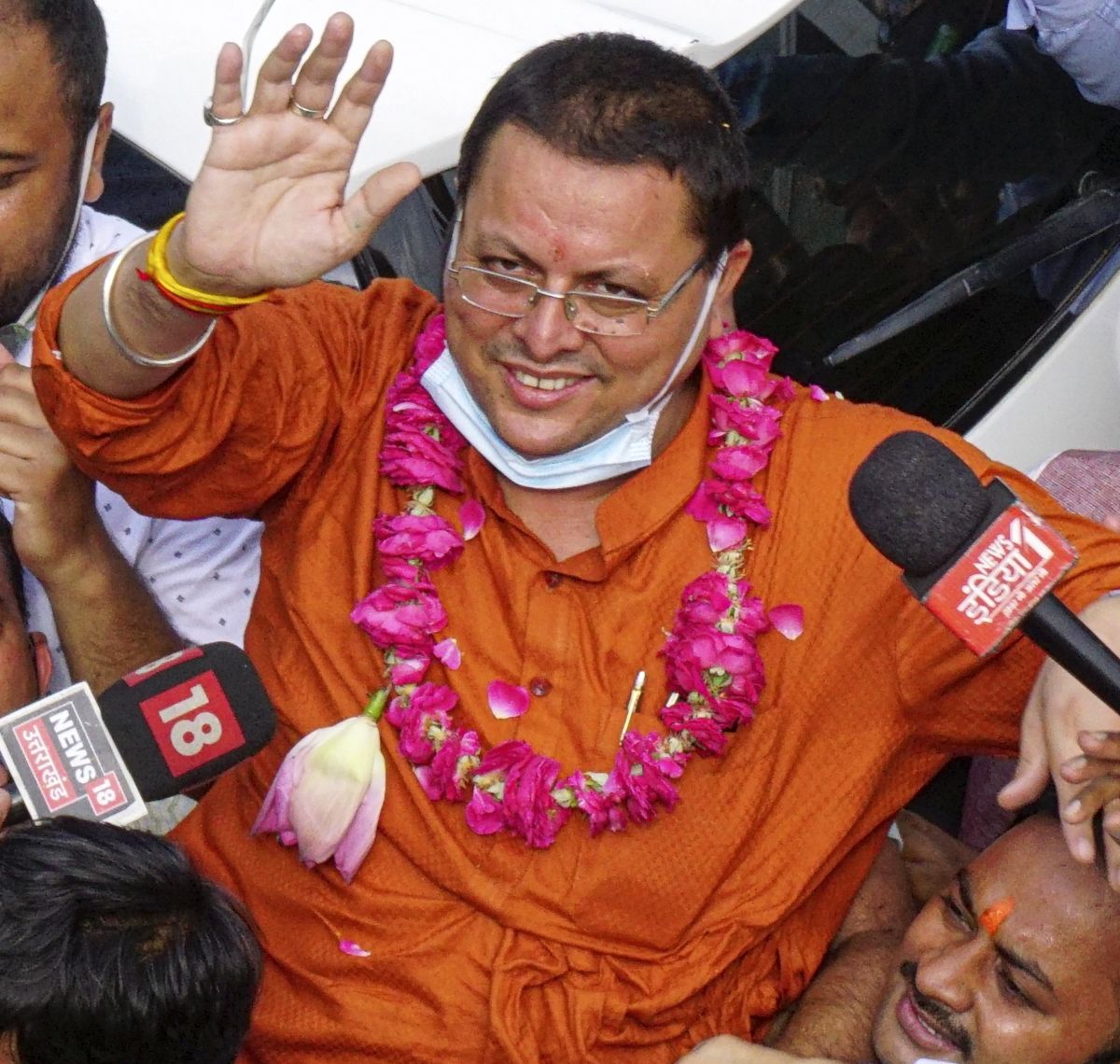 The 45-year-old will be the youngest chief minister of the state and replaces Tirath Singh Rawat, who resigned on Friday night within four months of taking charge from Trivendra Singh Rawat.

Dhami will be sworn in on Sunday, Union minister Narendra Singh Tomar told reporters after a legislature party meeting at the state BJP headquarters where he was a central observer.

"My party has appointed a common worker, son of an ex-serviceman, who was born in the border district of Pithoragarh to serve the people.

"We'll work on people's issues with the cooperation of all. I will carry forward the work done by my predecessors," Dhami, a two-time MLA from Khatima in Udham Singh Nagar district, said.

As Dhami takes over less than a year ahead of the next assembly elections, his biggest challenge lies in leading the BJP to another victory and retaining power in Uttarakhand, where the party has been plagued by factionalism.

Changing chief ministers twice in a short span has not helped the party's image, with the opposition Congress accusing it of causing "political instability" and betraying the people.

"We accept the challenge and we will take forward the party and serve the people," Dhami said when asked whether taking over as CM just months ahead of assembly polls will be an uphill task.

The chief minister-elect thanked the party leadership for reposing faith in him and said that he will work with everyone's cooperation.

No other name was proposed for BJP legislature party leader, Tomar said.

Soon after his unanimous election as the BJP legislature party leader, Dhami headed for the Raj Bhawan along with a number of MLAs and the central observers to stake his claim to form the government. The BJP had replaced Trivendra Singh Rawat with Tirath Singh Rawat on March 10, hoping to go into the assembly polls with the new face, but he too was asked to step down as the Constitution required him to get elected as a member of the state assembly within six months of his appointment as CM and there seemed an increasing uncertainty over the Election Commission holding bypolls at this stage.

The opposition Congress hit out at the BJP leadership, saying instead of ushering in development, it has thrown Uttarakhand into the throes of political instability and betrayed its people by repeatedly changing chief ministers.

Starting with Nityananad Swami, the BJP will have eight chief ministers in the state, senior Congress leader Harish Rawat said, and added that in the latest four and a half years of the BJP's rule in Uttarakhand, there will be three chief ministers.

"The BJP's high drama in Dehradun is an insult to the people of Uttarakhand. The prime minister had promised to give a double-engine government, but the state only received different chief ministers and no development," Harish Rawat, a former chief minister, said.

"This is BJP's example of lust for power, political instability, sharing fruits of power and failure of leadership. Instead of serving the people of Uttarakhand, they tried to distribute power, and PM Modi and J P Nadda are responsible for this. The BJP has brought Uttarakhand to such a turn where power means only sharing its fruits and nothing else," he alleged.

Ending days of speculation about a change of guard in the state, Tirat Singh Rawat on Friday handed over his resignation letter to Governor Baby Rani Maurya past 11 pm, hours after returning from Delhi where he was summoned by the top BJP leadership on Wednesday.

The names of nearly half a dozen MLAs were doing the rounds as probables for the top job, including Chaubattakhal MLA and cabinet minister Satpal Maharaj, Shrinagar MLA Dhan Singh Rawat and Khatima MLA Pushkar Singh Dhami.

Interacting with reporters at his official residence after returning from the Raj Bhawan, Tirath Singh Rawat said, "I thought it was appropriate to resign as the state was facing a constitutional crisis under the provisions of section 151 A and 164 of the Representation of People Act."