The Aam Aadmi Party stormed into power in Punjab, winning 92 seats, according to the poll results declared by the Election Commission. 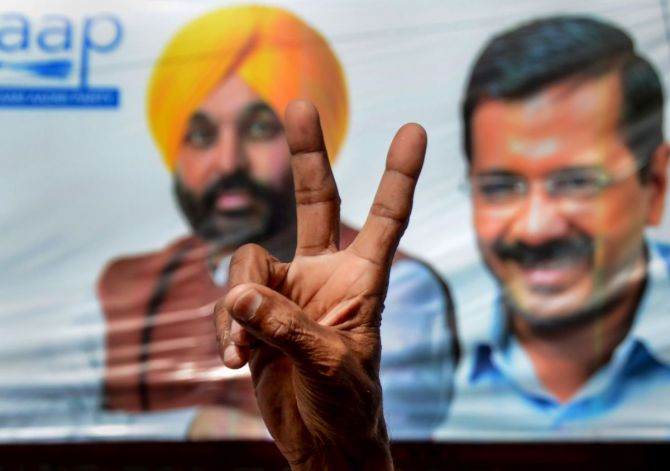 In the 117-member Assembly, a party needs to get 59 seats to form the government.

The incumbent Congress could win only 18 seats, with Chief Minister Charanjit Singh Channi losing both seats he contested -- Chamkaur Sahib as well as Bhadaur.

While the Shiromani Akali Dal won three seats, it's ally Bahujan Samaj Party won one, and the Bharatiya Janata Party won two seats and one seat went to an Independent candidate.

AAP supremo Arvind Kejriwal hailed the party's performance in Punjab as a 'revolution'.

Former CMs Parkash Singh Badal, Amarinder Singh and Rajinder Kaur Bhattal were also among the heavyweights who were defeated.

In the 2017 Punjab assembly polls, the Congress had ended the SAD-BJP's 10-year rule by bagging 77 seats.

AAP had managed to get 20 seats while the SAD-BJP had won 18. Two seats went to the Lok Insaaf Party.

'Many congratulations to the people of Punjab for this revolution,' Delhi CM Arvind Kejriwal said in a tweet in Hindi.

He also posted a picture of himself standing with AAP's chief ministerial face Bhagwant Mann.

The oath-taking ceremony of the new Punjab cabinet will be held at Khatkar Kalan, the ancestral village of legendary freedom fighter Bhagat Singh in Nawanshahr district.

Mann said no government office will display photograph of the chief minister.

Instead, photos of Bhagat Singh and B R Ambedkar will be put on walls in government offices.

"The oath-taking ceremony will not be held at the Raj Bhawan, but at Khatkar Kalan. The date will be announced later," Mann said addressing party workers and supporters at Dhuri.

Appealing to people to work unitedly, Mann said those who did not vote for APP need not worry as the government will work for all sections of society.

On the other hand, the rival parties accepted the people's verdict and congratulated AAP.

'I humbly accept the verdict of the people of Punjab and Congratulate @AamAadmiParty and their elected CM @BhagwantMann Ji for the victory. I hope they will deliver on the expectations of people,' said Channi.

Former CM and Punjab Lok Congress president Amarinder Singh said he accepted the verdict with all humility as democracy triumphed.

Amarinder Singh had floated his own party after quitting the Congress last year, owing to his unceremonious exit as the CM.

He lost from his home turf Patiala Urban by a margin of 19,873 votes to AAP candidate Ajit Pal Singh Kohli.

SAD president Sukhbir Singh Badal said that his party whole-heartedly and with total humility accepts the mandate given by the people of the state.

'We whole-heartedly & with total humility accept the mandate given by Punjabis. I am grateful to lakhs of Punjabis who placed their trust in us & to SAD-BSP workers for their selfless toil. We will continue to serve them with humility in the role they have assigned to us,' Sukhbir Badal tweeted.

AAP senior leader Raghav Chadha said the party will emerge as the national and natural replacement of the Congress in the coming days.

Chadha said people of Punjab have chosen Bhagwant Mann and the Kejriwal model of governance.

There was jubilation in the AAP camp right from the morning as early trends clearly put AAP away ahead of rivals.

Lakhwinder, an AAP supporter in Kharar, said, "Those parties which until yesterday were questioning the exit poll surveys, which showed clear majority to AAP, will have no face to show now."

The results also showed that the Sanyukt Samaj Morcha, a political outfit floated by various farmer bodies, failed to make any mark.

In the 2022 elections, AAP sought to project itself as an agent of change and designed its poll campaign likewise and accused its rivals of 'looting' the state.

It also announced its chief ministerial face ahead of polls to give clarity to voters.

The SAD and the Congress have alternatively been forming governments after the reorganisation of Punjab in 1966.

The Congress fought the elections with Charanjit Singh Channi as its CM face, hoping for the consolidation of the Scheduled Caste votes.

The stakes were also high for the SAD, which contested the polls in alliance with the BSP after breaking electoral ties with the BJP over farm laws.

The BJP, which used to be a junior partner during its alliance with the SAD, fought this election as a major partner after allying with the Punjab Lok Congress and Sukhdev Singh Dhindsa-led SAD (Sanyukt).