Punjab Chief Minister Amarinder Singh on Monday said his government would pass either a resolution or a Bill in the state assembly to counter the 'dangerous impact' of the three farm laws of the Centre. 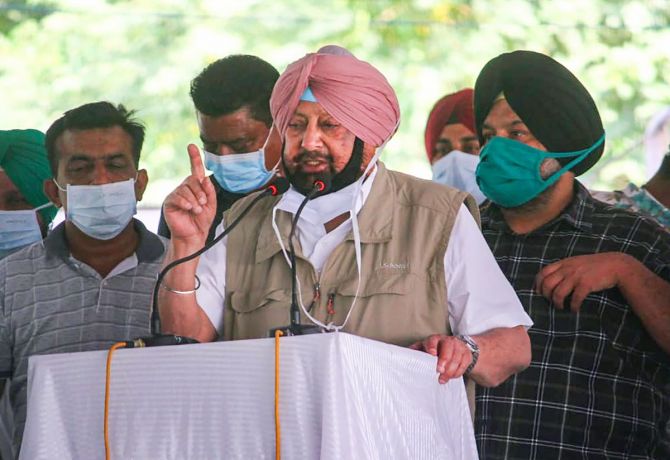 Addressing public rallies at Barnala chowk and Bhawanigarh in Sangrur, the chief minister vowed to do whatever it takes to protect the farmers and the state from the 'devastating' effects of the 'black laws'.

"We will not step back. We will pass whatever resolution or Bill needed in the assembly," said Singh.

He further said his government would also approach the Supreme Court against these new legislations.

The CM also lashed out at the Union government, accusing it of 'destroying' the time-tested farmer-arthiya (commission agent) relationship and handing over the agriculture to big corporates like Adanis and Ambanis.

"Will you go to Adanis and Ambanis when in need, as you do with the arthiyas at present?" asked the CM.

Slamming the Modi-led government, the CM said the Centre had 'backtracked' on every single promise, be it the constitutional promise of the Goods and Services Tax or the doubling of farmers' income.

For seven months, Punjab had not got its share of GST, leaving the state struggling to manage amid the COVID-19 crisis, he said.

Asserting that the Congressmen, with Rahul Gandhi leading the way, will fight for farmers till their last breath, the chief minister also appealed to the Wayanad MP to repeal the black laws once he becomes the prime minister.

Rahul has come to hold the farmers' hands, Amarinder Singh said, terming the new farm laws an 'act of total injustice' with the farming community.

The Modi government does not know how agriculture works in Punjab and in the country, he asserted, adding these legislations would pave the way for scrapping of the minimum support price and winding up of the Food Corporation of India, as per the Shanta Kumar committee recommendations.

He further warned that these laws would lead to the closure of the mandis for the agricultural crops.

Singh said his government cannot let the Union government do that and it will take all steps, including a Vidhan Sabha session to counter the new legislations besides challenging the Centre's laws in the Supreme Court.

Addressing a gathering at Samana in Patiala, the CM said the future of the agriculture itself was at stake because of the farm laws, which the government sitting in Delhi had 'forced' on the farmers and the states across the country.

The small farmers, constituting 70 per cent of the farming community, would be totally ruined, he claimed.

Vowing to shield farming community against any harm 'come what may', the CM said the state and its farmers faced a long-drawn battle and exhorted the farmers to be ready for a long and difficult struggle.

Lambasting the Modi government for 'discriminating' Punjab and its farmers, who had always been at the forefront to protect India and its people, Amarinder said even during the COVID pandemic, it was these farmers who ensured that nobody went hungry.

Congress leader Rahul Gandhi and Amarinder Singh took out a tractor rally from Bhawanigarh in Sangrur to Samana in Patiala.

President Ram Nath Kovind has given his assent to the Farmers' Produce Trade and Commerce (Promotion and Facilitation) Bill, 2020; the Farmers' (Empowerment and Protection) Agreement of Price Assurance and Farm Services Bill, 2020 and the Essential Commodities (Amendment) Bill, 2020 which were passed by the Parliament last month.