Under flak from the opposition for 'diverting' Covid vaccines to private hospitals to make a profit, the Punjab government on Friday asked them to return all stock meant for the 18-44 age group. 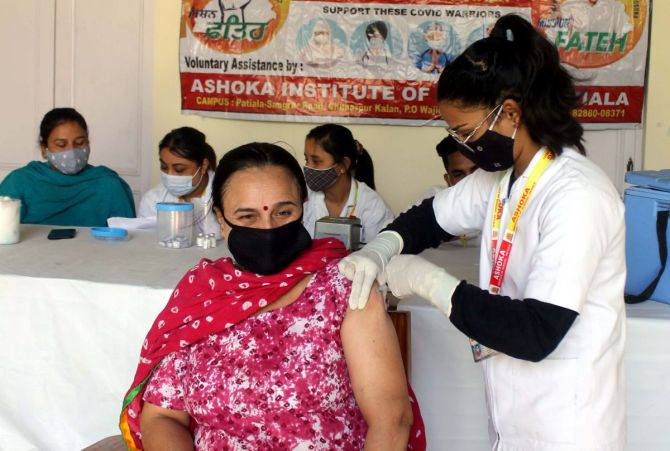 IMAGE: A medic inoculates the second dose of the COVID19 vaccine at the Community Health Centre in Patiala on Friday. Photograph: Harmeet Sodhi/ANI Photo

The Centre too wrote to the state government, seeking a clarification over reports that it sold Covaxin to private hospitals and earned a profit.

Earlier in the day, Punjab Health Minister Balbir Singh Sidhu said he has ordered a probe into the allegations.

And hours later, the state government issued the new order, withdrawing 'one-time' instructions to private hospitals to vaccinate people in the 18-44 years category.

Now, the recalled vaccine doses will be administered free to this age group by the government, the minister told the media.

'The order of providing one-time limited vaccine doses to 18-44 years age group population through private hospitals has not been taken in the right spirit and is hereby withdrawn,' the new government note said.

'Further, it has been decided that the private hospitals should return forthwith all the vaccine doses available with them,' Vikas Garg, who is in charge of Punjab's Covid vaccination programme, said in the order.

Once they get their own direct supplies from the manufacturers, the private hospitals will also return to the state government the doses they have already used up.

The minister said about 42,000 doses had been allotted to private hospitals, and they have administered only 600 of them so far. He said instruction has been issued to all civil surgeons not make any fresh allotment to them.

Private hospitals will now get direct supplies of vaccination from the manufacturers. The amount deposited by them in the 'vaccine fund' will be refunded by the government.

Till late evening, however, the Punjab government had not responded to the charge that it made a 'profit' when it allotted the vaccine stocks to private hospitals.

BJP national general secretary Tarun Chugh alleged that the state government 'sold' 40,000 Covaxin doses at Rs 1,060 each out of the 1.14 lakh it received last month for Rs 420 each from the Centre.

He claimed these were sold to 20 private hospitals, which in turn sold them for Rs 1,560 per dose.

'As per this Strategy, the private sector hospitals are directly procuring COVID-l9 vaccines from the vaccine manufacturers,' the letter said, seeking a clarification from the state.

The SAD, which had on Thursday accused the Amarinder Singh government of 'diverting' Covid vaccines to private hospitals at 'hefty margins', continued its attack.

The BJP demanded action by the Centre against the state government.

The AAP called it a 'vaccine scam' and alluding to remarks made by Prime Minister Narendra Modi in another context said this was a true case of turning adversity into opportunity.

AAP leader Raghav Chadha alleged that the government did not administer free the vaccine doses received under the state's quota but sold them off to private hospitals, making 'hefty profits'.

"This is a scam of thousands of crores," he alleged.

Chadha said people now have to cough up Rs 3,100 for two doses of Covid vaccine at private facilities when they should be getting them free.

"The Congress is busy with its infighting, they are not bothered about people's welfare," he charged.

"The government itself is on ventilator now and they have realized that they are not coming back to power, and that's why they are indulging in as much looting as they can," he said.

BJP leader Chugh said a criminal case should be registered against all those involved in the 'vaccine scam' under which the doses provided by the Centre for the poor, working class were 'sold' at 'commercial rates' to private hospitals.

They, in turn, 'made huge money out of it at the cost of the poor and the needy people', his statement said.

All this has been happening when Punjab last month recorded among the highest fatality rates in the country, the BJP leader said.

Chugh said it was 'pure black marketing' by the state government. 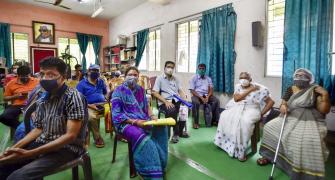 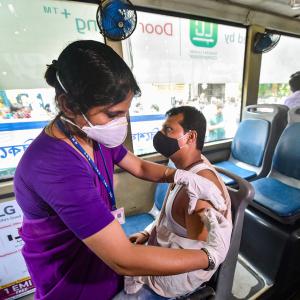 No decision on indemnity to any vax producer: Govt