The regular 'band, bajaa, baraat' were missing but the festivities seemed intact as Punjab Chief Minister Bhagwant Mann turned groom for his wedding with a doctor from Kurukshetra at his home on Thursday. 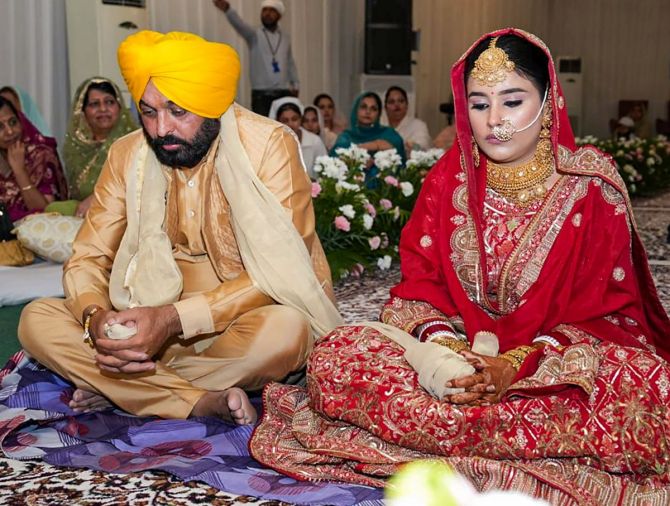 It was a private ceremony without the usual crowds, so much a part of the big, fat Punjabi wedding.

Though few details were available, visuals on television and Twitter showed Mann and his bride at the Anand Karaj ceremony.

There were also pictures of the groom at his festooned home, walking under a 'phulkari dupatta' held up by Chadha among others, and at the ceremony.

Both Mann and Kaur could be seen smiling in one of the pictures while another showed them sitting together for lunch post the wedding rituals. 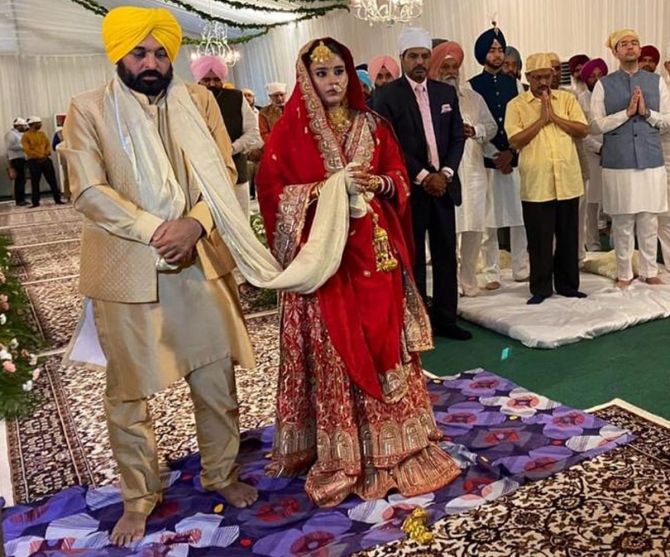 One of Chadha's post showed Mann and himself on a sofa.

Kejriwal played the role of an elder from Mann's family and actively participated in the wedding rituals. Mann, 48, the first chief minister of the state to get married while in office, is tying the knot with Dr Gurpreet Kaur from Pehowa in Kurukshetra in Haryana.

This is Mann's second marriage. He separated from his first wife in 2015 -- they have two children, daughter Seerat Kaur, 21, and son Dilshan, 17.

Tight security arrangements were in place at the chief minister's home in Sector 2. 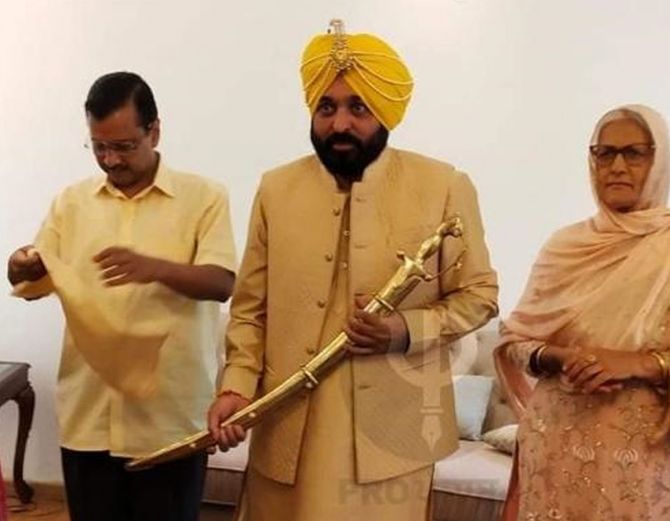 Gurpreet Kaur, 30, shared a picture of herself on Twitter and wrote, 'Din Shagna Da Chadya (the day of marriage has arrived)'.
She also thanked AAP leaders for their congratulatory messages.

According to party insiders, the wedding, being solemnised according to Sikh rituals, was attended by Mann's mother and sister and just a few guests, including Kejriwal and his family.

Before the wedding, Kejriwal told reporters at the airport, "Today is a day of immense happiness that my younger brother and Punjab Chief Minister Bhagwant Mann ji is getting married and is making a new beginning.

"May God bless him with a happy married life and both (the couple) always remain happy." Chadha said, "A new chapter in CM Bhagwant Mann's life is going to start today. I congratulate Mann saab's family, his mother and sister. It will be a small function. Only family members will attend."

"We all are happy that happiness has returned to Mann saab's family after a long time. It was his mother's dream to see her son getting settled again. Today, that dream is going to come true," he told reporters.

Gurpreet Kaur completed her MBBS from a private university in Haryana in 2018.

She has two elder sisters who are settled abroad.

AAP leader and minister Harjot Singh Bains in a tweet said, 'God Bless the Sweet Couple. I am happy for @BhagwantMann ji and Dr Gurpreet ji.'

'Congratulations to Punjab Chief minister @BhagwantMann Ji on the occasion of his wedding. May Waheguru shower his blessings on the couple.'