Punjab Health Minister Vijay Singla was sacked from the state cabinet on Tuesday over graft charges, and was arrested shortly afterwards, with Chief Minister Bhagwant Mann asserting his government has zero-tolerance to corruption. 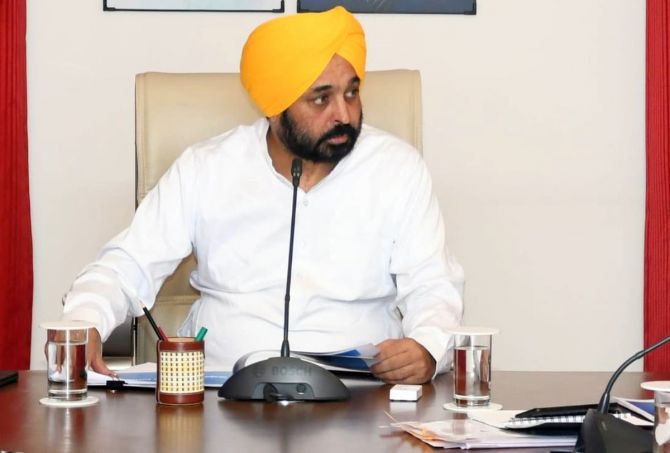 Singla's officer on special duty Pardeep Kumar was also arrested, and both were presented before the court of Ravtesh Inderjit Singh in Mohali under heavy security, which sent them to three-day police remand.

An FIR against the two have been registered at the Mohali Phase-8 police station on a complaint by Superintending Engineer Rajinder Singh who has alleged they demanded Rs 1.16-crore bribe from the allotment of projects and a one per cent commission in all future contracts.

Chief Minister Mann himself announced Singla's removal from the cabinet which was sworn in just two months ago after the Aam Aadmi Party stormed to power, riding on the agenda of corruption-free governance, and other poll promises.

When he was being taken out of the court, a battery of reporters asked Singla about the allegations against him. "It is a conspiracy and an attempt to defame the party," he told them.

AAP national convener and Delhi Chief Minister Arvind Kejriwal lauded Mann for his decision and said his party will not allow any corrupt activities by its leader.

"Sardar Bhagwant Singh Mann has dismissed his health minister after finding him involved in corruption. He (Singla) is being arrested after lodging a case against him. We are proud of you Bhagwant. The entire Punjab and the country are proud of you," Kejriwal said.

He said the AAP is the only party that has the courage to take action against its own leader for corruption.

With the sacking of Singla, the Bhagwant Mann Cabinet is now left with nine ministers. The Punjab cabinet can have a total 18 ministers including the chief minister.

Mann said the decision to sack Singla was made after he came to know that he was allegedly demanding a "one per cent commission" in tenders and purchases by his department.

Soon after his sacking, the 52-year-old Singla was arrested by the Punjab police.

The FIR against Singla was registered at 11:38 am at a Mohali police station while the announcement of his sacking was made at around 1 pm.

Official sources said Mann came to know about Singla's alleged wrongdoings through an official 10 days ago. The CM assured the official that he was with him and that he does not need to fear anyone, the sources said.

With the help of the official, an operation was conducted after which it came to fore that Singla and his aides were demanding a "one percent commission" in government projects.

It is learnt that an audio recording was also made which purportedly implicates Singla.

"A case was brought to my notice in which one minister in my government was demanding a one percent commission from each tender or purchase of his department. I took this case very seriously," Mann said in a video message on Tuesday.

"I am taking strict action against that minister and I am removing him from the cabinet. I am also giving directions to the police to register a case against him," Mann said. "That minister's name is Vijay Singla. He was the health minister."

Mann said Singla has admitted to his alleged wrongdoings.

Mann said the decision to oust Singla was historic. "I will not tolerate corruption of a single rupee. We want to turn Punjab into a corruption-free state."

”But only I knew this case. Neither the media nor the opposition knew it. It is me who is taking action," he said, alleging the Opposition, including his predecessors, has always sheltered and promoted corrupt leaders.

Mann said he could have easily buried this matter but by doing so he would have "betrayed" his conscience and broken the trust of lakhs of people.

Mann said his government will not allow corrupt practices, and warned that no one indulging in such activities will be spared.

He said people have chosen the AAP for a transparent and corruption-free system and he is duty-bound to fulfil the aspirations of every Punjabi.

Superintending Engineer Rajinder Singh, who is posted at Punjab Health System Corporation on deputation, also alleged in his complaint that he was threatened his career will be destroyed, and said he eventually agreed to pay Rs 5 lakh to avoid the "mental harassment".

He said he recorded the conversation that purportedly took place during this payment on May 23 and presented it to the police.

According to an FIR filed based on his complaint, Singh has said the minister's OSD Kumar called him to the Punjab Bhawan last month and told him he allotted construction projects worth Rs 41 crore, besides paying Rs 17 crore to contractors for March.

Kumar demanded Rs 1.16 crore as a bribe which was two percent of the total sum of Rs 58 crore, Singh has alleged in his complaint.

The SE also alleged he was asked to pay a one per cent commission on all future contracts.

Singla and OSD Kumar have been booked under the relevant sections of the Punjab Prevention of Corruption Act, 1988.

The AAP had bagged 92 of the 117 seats, decimating the Congress and other rivals in state polls.