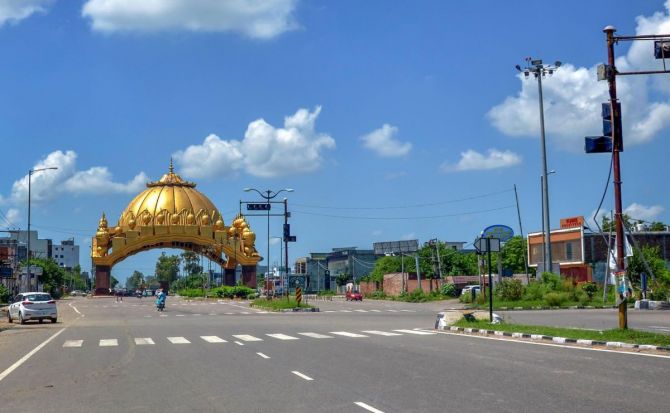 IMAGE: City streets wear deserted look, during the complete lockdown in the wake of coronavirus pandemic, at the entrance of Amritsar. Photograph: PTI Photo

Three of the 23 MLAs are cabinet ministers. Another minister who had tested positive earlier has recovered.

The chief minister gave the number during a video conference with Congress president Sonia Gandhi, who had held a virtual meeting with CMs of opposition-ruled states to discuss a range of issues faced by them.

"As of today, two days before the scheduled Punjab Vidhan Sabha session, 23 ministers/MLAs were COVID positive," said the CM according to an official release.

"If this is the state of the legislators and ministers, one can only imagine how grave the situation on the ground is," he said.

Referring to the JEE-NEET exam, the CM said during the virtual meeting the scenario is not conducive to hold it.

Among the 23 MLAs who contracted the infection so far, 13 are from the Congress, six from the Shiromani Akali Dal and three from the Aam Aadmi Party , officials said on Wednesday evening.

Last month, Cabinet Minister Tript Rajinder Singh Bajwa was found infected with the infection but now he has recovered.

He claimed that Bilaspur told him that the health authorities first informed him that he has tested negative but later he was declared coronavirus positive.

Arora said Bilaspur was part of the AAP MLAs' meeting held on Tuesday to discuss the party's strategy for the upcoming assembly elections.

He asked whether Bilaspur was declared coronavirus positive under a 'conspiracy' by the government in order to ensure other members in the meeting go into mandatory one-week isolation.

Arora said he asked Bilaspur to get himself tested from a private lab for a re-check.

The session of 117-member Punjab Assembly will be held on August 28.