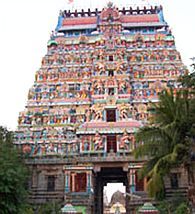 Special pujas were performed at the famous Nataraja temple at Chidambaram in Cuddalore  district as a mark of gratitude to the Supreme Court's ruling that the 1000-year-old Shiva temple will be managed by priests and not by the state government.

The pujas were performed in the names of Justices B S Chauhan and S Bobde, the apex court judges who set aside the order of the Madras high court which had in 2009 transferred the administration of the temple to the government, and politician Subramanian Swamy, who appealed against the HC order,

On Monday, the Supreme Court directed that the famous Nataraja temple in the town of Chidambaram in Tamil Nadu will be managed by priests and not by the state government.

A bench of justices B S Chauhan and S Bobde said that the Tamil Nadu government's July 1987 order appointing an executive officer to manage the temple is "arbitrary, illegal and unjust".

The bench pronounced the verdict while setting aside the Madras high court's 2009 order upholding the decision of the state to takeover the management of the temple by appointing an executive officer.

"...It was not permissible for the authorities to pass any order divesting the said respondent from administration of the temple and thus, all orders passed in this regard are liable to be held inconsequential and unenforceable," the apex court said.

Setting aside the high court's order, the apex court has held that the Dikshitars constitute a 'religious denomination' and their rights "are to be preserved and protected from any invasion by the State".

A religious denomination is a collection of individuals having a system of belief, a common organisation and designation of a distinct name.

The bench also said that the government can take over management of a temple to remove any "maladministration", but such an arrangement cannot be for an "indefinite period".

"Even if the management of a temple is taken over to remedy the evil, the management must be handed over to the person concerned immediately after the evil stands remedied. Continuation thereafter would tantamount to usurpation of their proprietary rights or violation of the fundamental rights guaranteed by the Constitution in favour of the persons deprived," the bench said.

The apex court observed that the reason for taking over the management is not the removal and replacement of the existing administration "but to rectify and stump out the consequences of maladministration".

It said that the government's power to regulate does not mean power to supersede the administration for an indefinite period.

"Therefore, taking over of the management in such circumstances must be for a limited period. Thus, such expropriatory order requires to be considered strictly as it infringes fundamental rights of the citizens and would amount to divesting them of their legitimate rights to manage and administer the temple for an indefinite period.

"We are of the view that the impugned order is liable to be set aside for failure to prescribe the duration for which it will be in force. Supersession of rights of administration cannot be of a permanent enduring nature. Its life has to be reasonably fixed so as to be co-terminus with the removal of the consequences of maladministration," the bench said.

While allowing the appeal of the priests, it refused to go into the allegations of malpractice against them saying "appointment of an executive officer could not have been exercised in the absence of any prescription of circumstances/conditions in which such an appointment may be made".

"Even otherwise it is not permissible for the State/ statutory authorities to supersede the administration by adopting any oblique/circuitous method. We would also like to bring on the record that various instances whereby acts of mismanagement/maladministration/ misappropriation alleged to have been committed by podhu dikshitars have been brought to our notice.

"We have not gone into those issues since we have come to the conclusion that the power under the Tamil Nadu Hindu Religious and Charitable Endowments Act 1959 for the appointment of an executive officer could not have been exercised in the absence of any prescription of circumstances/conditions in which such an appointment may be made.

"More so, the order of appointment of the executive officer does not disclose as for what reasons and under what circumstances his appointment was necessitated. Even otherwise, the order in which no period of its operation is prescribed, is not sustainable being ex facie arbitrary, illegal and unjust," the apex court said.