Anybody over 50 years of age or with co-morbidities can get a date, place and time of choice for getting the vaccine shots.
Nivedita Mookerji and Sohini Das report. 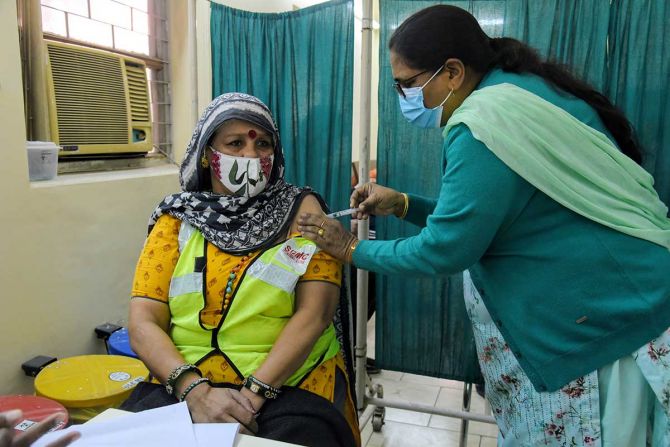 The government has begun to scale up the COVID-19 vaccination process in multiple steps, but is yet to take a call on how much it would spend.

As part of scaling up, the appointment and registration system for the general public is ready to go live.

Such a system will enable anybody over 50 years of age or with co-morbidities to get a date, place and time of own choice for getting the vaccine shots.

The Union health ministry is expected to open up public vaccination by end of March after registration through Co-WIN, the cloud-based end-to-end IT solution for vaccination, sources said.

No decision has been taken yet on who will bear the cost for the upcoming vaccination round meant for 50 plus and those with co-morbidities, according to an official.

There are indications that the government may go for a hybrid model in terms of payment-- income criteria may be considered for giving the shots free or possibly at a subsidised level for some.

Sources in industry bodies as well as state governments noted that the Centre could pick up the tab for at least the initial phases of vaccinating those with co-morbidities.

The target is to vaccinate 270 million in the third round.

While there's no definite plan yet on vaccine being sold in the open market, the private sector is likely to be involved in the vaccination drive, an official privy to the development said.

Many corporate groups including Reliance Industries and Tatas are learnt to be in talks to procure vaccine for their employees.

RIL, for example, has the list ready -- around 900,000 including employees and their immediate families.

"The private sector may be allowed to buy vaccine from the manufacturers," a source said.

The government is unlikely to pay for corporate employees, an official pointed out.

Even when the private sector procures it, the government may fix the price, he said.

Also, the government will have the responsibility for generating the final vaccination certificate, irrespective of who's procuring the doses or who's getting inoculated.

"It will be a centralised process to ensure there's no leakage in the system," the source added.

The technology backend is in place after the initial technical glitches with the Co-WIN platform, which has now been integrated with the Covid contact-tracing app Aarogya Setu.

R S Sharma, who chairs a panel to oversee the technology network for Covid inoculation, said Co-WIN would offer discoverability so that anybody seeking a vaccination appointment will be shown hospitals or health centres close to his location.

"At the centre of it all is a citizen-centric approach. The platform will give you the place, date and time of your choice for vaccination.< It will also track when the first shot has been administered and send intimation for the second jab," Sharma said.

A digital certificate will be generated once the process is completed.

But there are questions around how the plan will be executed.

So far, only health workers and other frontline people, shortlisted by the government, have been vaccinated free of cost.

The government has also placed fresh orders to vaccine makers - 4.5 million doses to Bharat Biotech and 10 million to the Serum Institute of India.

This is in addition to the first lot of procurement of 16.5 million doses from the two vaccine makers.

The Serum Institute of India has an inventory of around 50 million doses -- enough to meet the country's requirements for now even as it steps up exports. 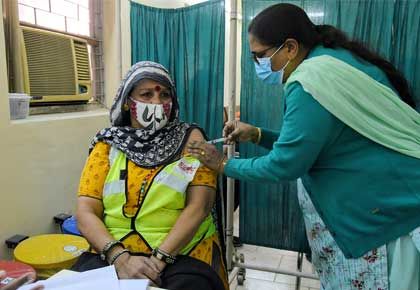