The National Investigation Agency will probe suspected terror cases, including the Lucknow encounter in which an alleged terrorist linked to a train blast was killed, Home Minister Rajnath Singh said on Thursday.

While the Uttar Pradesh police shot dead suspected terrorist Mohammad Saifullah on Wednesday, six suspects have been arrested by cops in Madhya Pradesh and UP on terror charges, Singh said in a statement in the Lok Sabha. IMAGE: Mohammad Sartaj, father of Saifullah, who has been linked to the Bhopal-Ujjain train blast, refused his body on Wednesday, saying a traitor couldn't be his son. Photograph: PTI Photo

Members thumped desks when the minister lauded Saifullah’s father Mohammad Sartaj for his refusal to accept his son’s body saying “if he could not be loyal to the country, how can he be ours”.

“The government is proud of him and I am sure Parliament too is,” he said.

Reacting to the gesture, Saifullah said, "We thank them for this and it is a matter of happiness that they have acknowledged our decision. It is a good message for the country."

"It is a big gesture to laud a small man's decision, and sends out a good message to all countrymen," Sartaj, who lives in Kanpur, told reporters.

"A traitor cannot be my son, straight and simple," Sartaj had said about his son Saifullah, a suspected Islamic State terrorist who was killed in an encounter with the Uttar Pradesh Police on Wednesday in Lucknow after a 12-hour gunfight.

Sartaj had refused to take Saifullah's body, saying, "A traitor cannot be related to me, let alone be my son."

Saifullah was suspected to be linked with the blast in the Bhopal-Ujjain train in Madhya Pradesh on Tuesday.

Giving details of various cases registered in the two states following the blast which injured 10 persons, Rajnath said the state police arrested three suspects in Hoshangabad in Madhya Pradesh, following which the UP cops acted in various parts of the state following information provided by the accused and nabbed three persons. IMAGE: People gather near the site of the encounter between security forces and terrorist who was holed up inside a building in the Thakurganj area of Lucknow. Photograph: Nand Kumar/PTI Photo

“The above sequence of events presents an excellent example of coordination amongst state police and central agencies. Due to the prompt action taken by the police of both the state, a possible threat to national security was successfully averted.

“Further investigations will be handed over to the NIA,” he said. 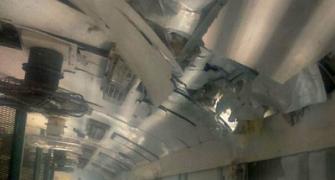 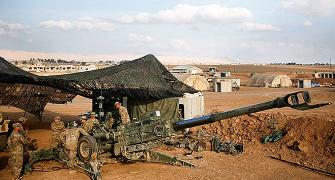