Protests in Kolkata over restoration of power, water supply 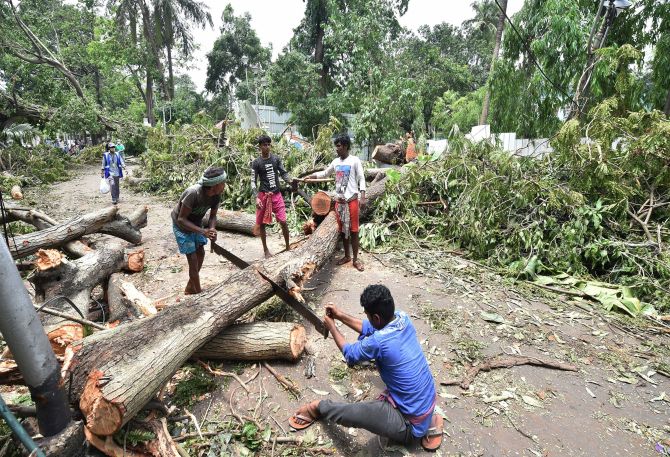 IMAGE: Municipal workers chop an uprooted tree to clear a street, in the aftermath of Cyclone Amphan, in Kolkata, on Friday. Photograph: Swapan Mahapatra/PTI Photo

Kolkata Mayor Firhad Hakim, on his part, gave assurances that normalcy would be restored in a week, as government officials were working round the clock to improve the situation.

Attacking the Trinamool Congress government, state Bharatiya Janata Party president Dilip Ghosh said the protests were a proof that the ruling dispensation has failed to live up to people's expectations.

At Behala area in south Kolkata, agitators took to the streets and shouted slogans against the government, claiming that residents had been reeling under power and water crisis for over 48 hours, with no respite in sight.

Similar protests were also reported from other parts of the state capital.

Pooja Saha, a techie who lives in central Kolkata, said he had called the Kolkata Municipal Corporation helpline number at least 50 times but got no response.

"It's stinking everywhere! I have called the KMC helpline more than 50 times, but received no response. If the clogged drains are not cleared anytime soon, people in the locality might fall ill," she said.

Hakim, who is also a TMC minister, said he had asked the city's private power supply provider to take necessary measures and ensure that supply was restored at the earliest.

"No one had imagined that the cyclone would cause such devastation. More than 5,000 trees have been uprooted. We have already cleared several roads. I can assure the people of Kolkata that normalcy would be restored within a week. We are in touch with the private power supply provider and had asked them to restore supply as early as possible," he said.

The Kolkata mayor also said the relief teams were working on a war footing, and life has returned to normal in many parts of the city.

Responding to Ghosh's criticism, Hakim said, "He should learn to speak less when the chief minister and the prime minister are interacting with each other (on the issue of improving the situation)."

Prime Minister Nareandra Modi flew down to the state capital on Friday, and undertook an aerial survey of the cyclone-hit areas in Bengal, along with CM Mamata Banerjee.

Lauding the efforts of the state government in combating the crisis, Modi announced an advance assistance of Rs 1,000 crore for cyclone-ravaged Bengal.

In Namkhana area of South 24 Parganas district, people complained that they were not given enough tarpaulin sheets to cover the roofs of houses damaged by the cyclone.

In North 24 Parganas, distressed people claimed they were running out of food, as shops in the vicinity were yet to lift shutters in the aftermath of the calamity.

Cyclone 'Amphan', which made a landfall near Sunderbans in South 24 Parganas, had rampaged through several parts of the state on May 20, dumping heavy rain, swamping homes and farmland, and leaving at least 80 people dead.

The CM, following her review meeting with Modi, said Bengal has suffered losses of more than Rs 1 lakh crore.

She also said that the cyclone has adversely impacted 60 per cent of the state's population.