Protests rocked the campus of Chandigarh University in Punjab's Mohali on Saturday night over allegations that objectionable videos of several women students were recorded by a hosteller, following which Chief Minister Bhagwant Mann ordered a probe. 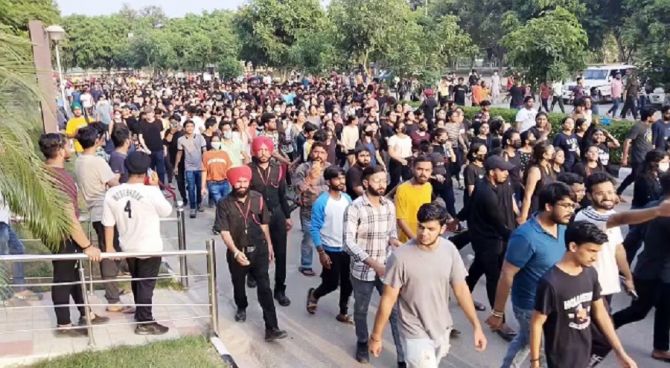 The protests continued on the campus till late Sunday night with senior officials from the district administration, police and university trying to pacify the students.

After a preliminary investigation, police arrested a woman student, while a 23-year-old youth, stated to be her boyfriend, was held in Himachal Pradesh and handed over to the Punjab Police.

The Himachal Police also detained another 31-year-old man in connection with the case.

Punjab's Additional Director General of Police, Gurpreet Deo, who reached the Chandigarh University campus to take stock of the situation after the Saturday night protests, told reporters that the woman student appeared to have shared a video of herself with the youth and no objectionable video of any other student was found.

University authorities also rejected as "false and baseless" reports that claimed videos of several women students in the varsity hostel were made and leaked on social media and that distraught students had attempted suicide.

During the Sunday evening protest by a large number of students, including male, many accused the university authorities of "suppressing facts" related to the alleged videos and '"suicide attempt'' by a student. Some students claimed that videos were leaked.

Most of the protesters were dressed in black clothes and chanted "we want justice" in the presence of police. They raised slogans against police as well.

Tension prevailed on the campus as protesting students confronted university and police officials, questioning "if nothing had happened on the campus", why the university on Sunday evening declared September 19 and 20 as "non-teaching days", thus a holiday for students.

They demanded an apology from the police and district administration for calling the objectionable videos of some students as “rumours”. They claimed the accused woman had admitted she had made the videos. Despite repeated efforts by the university authorities to end the fresh protest, students continued with it.

The university authorities even sought a list of their demands to end the stalemate. There was heavy deployment of police on the campus.

Students demanded that the statements of those female students whose videos, they alleged, got leaked, be recorded before representative of students.

Several students individually put forth their demands before the university authorities on many issues including changing hostel wardens, relaxation in timings for hostel entry, and safety issues.

A student claimed the videos were made which were later deleted and the accused student's phone was also broken.

Another student claimed more than 10 girls women students suffered panic attacks Saturday evening fearing that MMS videos of "50-60 girls had" been leaked by the arrested student to her boyfriend over phone.

She claimed that the boy's hostel had been converted into a girl's hostel recently and lacked facilities, while even CCTV cameras had not been installed in every corridor.

Some students also alleged that the university was trying to enforce a dress code for female students.

"We want that all investigation should be held with transparency," said a protesting woman student while also demanding that "hostels should not be made jails".

Deputy Inspector General of Police G PS Bhullar and Deputy Commissioner Amit Talwar told the protesters that a Special Investigation Team headed by a senior woman IPS officer will be formed for an in-depth investigation.

"It is our duty to clear every apprehension of the children," said Bhullar.

A student was also brought before them and she claimed that she was fine and no one had attempted suicide.

Mohali's SSP Vivek Sheel Soni faced the ire of agitated students after he told reporters that the protests occurred after "rumours" that videos of several women students had been made and leaked.

Soni said the arrested student's mobile phone has been seized for a forensic analysis and added that no suicide attempt by any student or death has occurred.

An FIR under IPC section 354-C (voyeurism) and the IT Act has been registered in the matter and further probe is on, officials said.

Chief Minister Mann ordered the probe into the incident, saying strict action will be taken against those found guilty. "Our daughters are our honour... a high-level inquiry has been ordered into the incident."

"I am in touch with the administration," said Mann, who is in Germany, appealing to people not to believe rumours.

The incident sparked a flurry of reactions from political parties and the central and state women's rights organisations too stepped in.

Delhi Chief Minister and Aam Aadmi Party national convener Arvind Kejriwal said those involved in the incident will get the "harshest punishment".

In a statement, the National Commission for Women said its chairperson Rekha Sharma has written to the Director General of Police of Punjab to deal with the matter strictly and without any laxity.

The victims must be given proper counselling and their safety and security must be ensured, the NCW said.

The women's rights body has also written to Vice Chancellor, Chandigarh University to take stringent action against the culprits in accordance with the law and investigate the matter extensively.

Badal said authorities should make all facts public and not try to suppress anything.

Following accusations of students that they were lathi-charged on Saturday during their protest, Mohali Deputy Commissioner Amit Talwar told them a magisterial inquiry will be conducted into it.

University authorities said that the demand of protesting students regarding relaxing hostel timings has been agreed to.

The university management and the police suggested that a students' committee be formed to hold further talks with the university administration regarding their various other issues.

DC Talwar also assured the students that no protesting student will be rusticated from the college.

Meanwhile, in Himachal Pradesh, DGP Sanjay Kundu said the state police reacted to the request of Punjab Police with sensitivity and professionalism and nabbed a 23-year-old man from Rohru in Shimla in the case.

Kundu in a tweet further said, “If any collateral evidence comes our way, we will take action as per law."

He further said a 31-year-old man, a resident of Tehsil Theog, was detained at Dhalli in Shimla, adding that he was taken by the Punjab Police to inquire his involvement in the case.

Briefing reporters at the university campus, ADGP Deo, who also holds the charge of women and child affairs, said many rumours about the case were circulating on various social media platforms.

"There are 4,000 girl students who live in the hostel. One has been arrested by police. Her phone has been taken into police possession and state cyber crime is conducting its analysis".

Deo said that three to four girl students spotted the accused student in the common washroom where she was taking some pictures with her phone "which they thought she was taking from underneath the bathroom door... They then reported the matter to the warden and subsequently the police were informed".

In a statement, Chandigarh University Pro-Chancellor R S Bawa said there are rumours that girls have committed suicide whereas the fact is that no girl has attempted any such step.

No girl has been admitted to hospital in the incident, he said.

Bawa said, "There is another rumour which is circulating through media that an objectionable MMS has been found of different students. This is totally false and baseless."

Mohali SSP Soni said, "If you look at the sequence of events so far now, in our investigation it has come to notice that the video was only of herself. Apart from this, there is no video of any other (student)."

In a video that surfaced on social media, a few students were purportedly seen confronting the student who is accused of making the videos. They ask her to tell the truth.

Referring to a video of a student being taken in an ambulance, the SSP Soni said she had some anxiety problems and was fine.

Replying to a question on the hostel warden, the SSP said she questioned the woman student, who was later arrested, to find information on whether she had made a video of any other student.

Notably, in a video, the warden is purportedly seen asking the woman student, "Who told you to record the video?..You will be suspended".

The warden is then seen pointing towards some other women students who are also present, and could be heard saying, "Don't these girls have honour? At whose behest did you do this? Who told you to make it?"