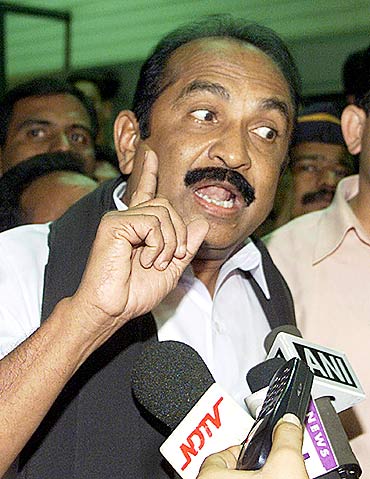 Marumalarchi Dravida Munnetra Kazhagam General Secretary Vaiko was on Friday detained by the police when he tried to move further from Gadchicholi to Sanchi to protest Sri Lankan President Mahinda Rajapaksa's visit.

"Vaiko has been detained as he tried to move further from Gadchicholi near Pandhurna along with his supporters," Madhu Kumar, Inspector General (Jabalpur Range) told PTI.

Vaiko along with hundreds of his supporters has been protesting for the past three days against the Rajapaksa's visit to Sanchi alleging him of atrocities against Tamils in the island nation.

"We had already told them not to move further (towards Sanchi via Bhopal). But today they tried to move ahead after staging a protest. All of them have been detained," Kumar said.

Meanwhile, as many as 5,000 security personnel have been deployed to ensure full security to Rajapaksa who was in Sacnhi to lay the foundation stone of an international Buddhist University.

Heavy security cover has been put in place on all the roads leading to Sanchi from state capital Bhopal, bus and railway stations and all markets were closed.

State authorities have also asked the railways ministry to ensure that no train stops in any station between Bhopal and Vidisha, including Sanchi, in view of the protest by some Tamil groups.

Around 11 trains are scheduled to stop between Vidisha and Bhopal on usual days.

"We have made elaborate security arrangements. Each and every place has been covered," said Ajay Sharma, Inspector General of Madhya Pradesh Police and in-charge of security for Rajapaksa's visit.

All commercial establishments near Sanchi have been closed by authorities.

Rajapaksa will visit Sanchi Stupa, where relics of Lord Buddha are kept, and then lay the foundation stone for 'Sanchi University of Buddhist and Indic Studies' aimed at promoting mutual relationship between Asian countries.

Rajapaksa arrived in Bhopal by helicopter from Bhopal.

At Sanchi, he was received by Madhya Pradesh Culture and Public Relations Minister Laxmikant Sharma.

Hundreds of Buddhists have come from across the country and many from outside to participate in Friday's function.