Protest against Pak's atrocities on minorities: PM to anti-CAA protesters

Lambasting the Congress and its allies for opposing the Citizenship Amendment Act, Prime Minister Narendra Modi on Thursday said the ongoing protests were against the Parliament and called on the agitators to raise their voice against Pakistan's atrocities on its minorities for the last 70 years. 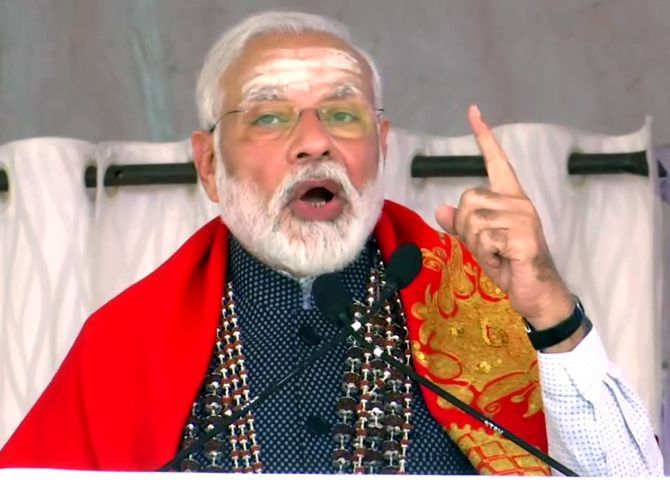 The prime minister said protecting and supporting minorities of neighbouring countries who have sought refuge in India was our cultural and national responsibility.

"Those who are protesting against the Parliament of India, I want to tell them that the need was to expose Pakistan's deeds on the world stage. If you want to protest, protest and raise voice against Pakistan's deeds for the last 70 years, you should have that guts," he said.

Addressing a gathering at Siddaganga Math near Tumakuru, he said, "If you want to shout slogans, shout against the way in which atrocities are happening against minorities there. If you want to hold rallies, hold it in favour of Dalits and downtrodden who have come from Pakistan (to India). If you want to do dharna, do it against Pakistan's deeds."

Modi was speaking after paying respects at the 'Gadduge' (final resting place) of Shivakumara Swamiji at Siddaganga Math, a prominent Lingayat seminary.

Pointing out that few weeks ago the Parliament passed the CAA, Modi said, however, the Congress and its allies and the ecosystem created by them are standing up against the Indian Parliament.

Pointing out that Pakistan was born on the basis of religion, and India was divided in the name of religion, Modi said from the time of partition, people of other religion in Pakistan faced atrocities.

"Whether it is Hindu or Sikh or Christian or Jain atrocities have increased against them in Pakistan with time. Thousands of such people had to leave their houses had to come to India as refugees," he said.

Noting that Pakistan did atrocities against Hindus, Sikhs, Jains, but the Congress and its allies dont speak against Pakistan, the Prime Minister said instead they are holding protests against those who took refuge in India to
save their lives, their religion and to protect the pride of their sisters and daughters.

"They (Congress and allies) don't have time to speak against Pakistan which did the atrocities against its minorities, what is the reason why their mouth is locked," he asked.

There is change in India's policy against terrorism, the Prime Minister said by abrogating Article 370, effort has been made to remove fear of terror and uncertainty fromthe life of people there and a new beginning of development has been ushered in both in Jammu and Kashmir and Ladakh.

He also said the road has been cleared for the construction of a grand Ram mandir at Lord Ram's birth place with peace and cooperation of everyone. 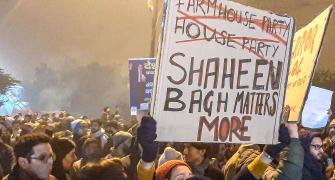