Process of appointment of judges cannot be 'hijacked': CJI

Amid the judiciary-government tussle, Chief Justice of India T S Thakur on Thursday asserted the process of appointment of judges cannot be "hijacked" and judiciary needs to be independent as it plays a role in the eventuality of a "tyrannical regime". 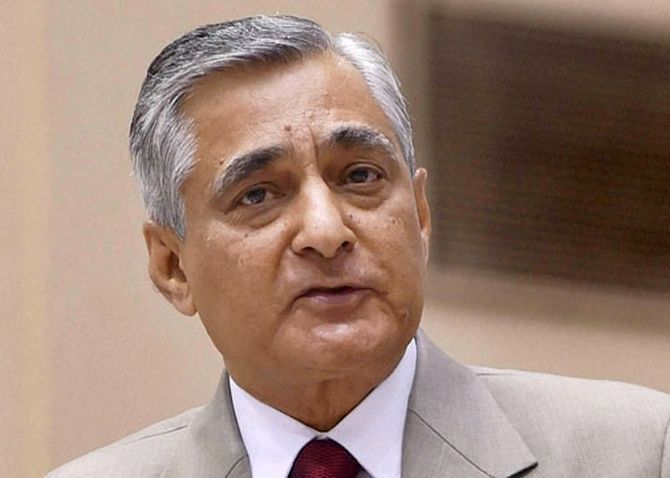 He also made it clear that judiciary cannot depend on executive in choosing judges.

He said judiciary must be independent regarding internal matters of judicial administration, including assignment of cases to the judges within the court, as unless there is an independent judiciary, the rights which are conferred by the Constitution would be "meaningless".

The remarks, made by the CJI while delivering the 37th Bhimsen Sachar memorial lecture in New Delhi on 'Independent Judiciary - Bastion of Democracy', assume importance in the wake of mounting tension between the judiciary and executive over the appointment of judges for higher judiciary as both the organs of the State have been blaming each other for the increasing vacancies of judges and to remain within a 'lakshmanrekha'.

Justice Thakur, who will be demitting office of CJI on January 3 next year, said the National Judicial Appointments Commission Act 2014, which was struck down last year by the Supreme Court, was an attempt which would have affected the independence of judiciary.

He added the "powerful and assertive Parliament" tries to assert for a greater say in the matter of judicial appointments.

Asserting that independence of judiciary was paramount for a democracy, he said judiciary cannot depend on the executive for discharging its duties and since the government was the "biggest litigant", one cannot say that executive can choose the judges to hear a case.

Referring to the NJAC verdict by a five-judge constitution bench headed by Justice J S Khehar who will succeed him as the CJI, Justice Thakur said, "The recent decision by the constitution bench striking down constitutional amendment by which NJAC was supposed to be set up also goes into all these aspects."

"The powerful and assertive Parliament tries to assert for a greater say in the matter of judicial appointments. An attempt to take away from judiciary the power to appoint judges was seen by the judiciary as an attempt to affect the independence of judiciary.

"Constitutional amendment seeking to set up NJAC was one such attempt. It was seen as an attempt that would affect the independence of judiciary," he said.

The CJI further said, "Judiciary must be independent as to the internal matters of judicial administration including the assignment of cases to judges within the court. Who should hear which case should not be decided by anybody except the judiciary."

"You cannot say the executive will choose its judges. Judiciary must have complete freedom in assigning as to who would be the judges who will decide a case," he said.

Referring to Article 144 of the Constitution, he said that it itself mentions all authorities in the country must act in aid of the judiciary.

"There is no option for statutory or non-statutory authorities except to fall in line. Judiciary is a guard who is always on the lookout like a watchman. Keeps its eyes open, that is the role judiciary plays against a tyrannical regime."

"This country has seen many ups and downs. Over the past 60-70 years, we have seen judgements full of situation in which the executive has gone far beyond its legitimate sphere. If you have to protect the citizens against tyrannical regimes, you need a judiciary. The entire chapter on Fundamental Rights will be rendered meaningless without an independent judiciary.

"Principle of independence of judiciary was not meant for personal benefits of judges but was created to protect humans against abuses of power," the CJI said.

He said that everything is regulated under Constitution and appointment of judges is no exception.

"The Supreme Court has had many occasions to interpret this provision of appointment of judges. The much-maligned collegium system has also been evolved while interpreting this provision," he said.

"If you talk of independent judiciary, you cannot have a judiciary which will depend on the executive for discharge of its functions. Judiciary must have complete freedom to decide who should be the judge to hear a matter," the CJI said.

He said that issue of promotion of judges must be based on objective factors and the question of accountability of judges on ethical and professional behaviour must be dealt by a fully impartial organ ensuring due process of law.

"If the proceedings against judges are taken up by the politicians or bureaucracy, it would seriously infringe upon the independence of the judiciary," he said.

Thakur also said that the judiciary is a "guardian" of the rights of the people and government has to respect judgements given by the judiciary.

He also advocated for complete separation of judiciary from the executive.