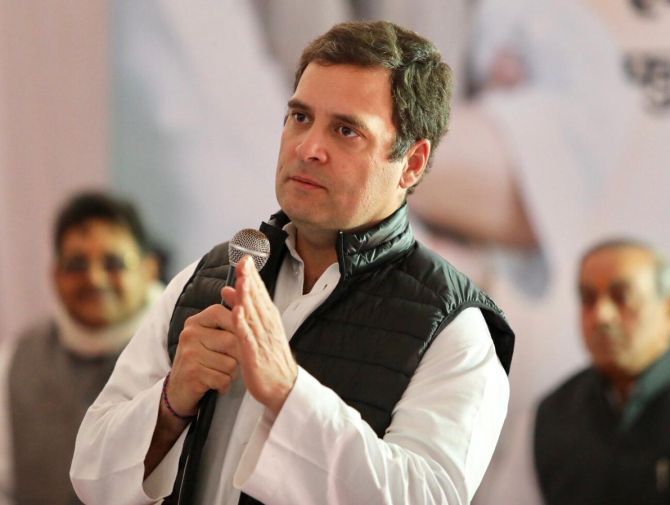 Congress president Rahul Gandhi on Thursday said he has given his sister Priyanka Gandhi, newly entrusted with eastern Uttar Pradesh, the target of ensuring that the party forms the next government in the state.

The Congress will also fight the coming Lok Sabha polls with 'full strength', he said at a public meeting in his constituency.

His two-day visit to Amethi had coincided on Wednesday with the formal entry of Priyanka Gandhi in politics, after years of speculation on whether she would take the plunge.

She has been appointed general secretary for Uttar Pradesh (East), while Jyotiraditya Scindia holds charge of UP West.

"Priyanka and Scindia have been given a target. That is to form a Congress government in Uttar Pradesh in the next election by defeating and wiping out the Bharatiya Janata Party," the Congress president said.

"Unlike PM Modi, I do not talk of a 'BJP-mukt Bharat' but speak with respect," Gandhi said, referring to Narendra Modi's call to 'free' India of the Congress.

"Whether it is Gujarat, Uttar Pradesh or Tamil Nadu, everywhere the Congress will fight with full might on the front foot, and you will see that after the Vidhan Sabha elections there will be a Congress government in the state," he said.

"In the Lok Sabha polls, we will contest with full strength, without taking a backward step," he said, referring to the election just months away.

He criticised the Centre government over the Rafale aircraft deal and accused the prime minister of 'waiving' industrialists' loans, charges countered earlier by the government.

"The watchman proved to be a thief," he said, and repeated the slogan, "Gali gali mein shor hai, chowkidar chor hai."

Earlier in the morning, Gandhi visited a local Shiva temple after meeting party workers at a guesthouse.

Addressing a public meeting in Salon area, he termed himself, his sister and mother Sonia Gandhi as 'soldiers' for the people of the constituency.

While Rahul Gandhi won the 2014 parliamentary elections from Amethi, Sonia Gandhi is an MP from adjacent Rae Bareli.

Both fall under the turf carved out for Priyanka Gandhi. Narendra Modi's Varanasi constituency and Chief Minister Yogi Adityanath's bastion Gorakhpur are also in eastern UP.

The SP and the BSP recently forged an alliance for UP in the coming Lok Sabha polls, keeping the Congress out of the pact.

The Congress president said the prime minister had not kept his poll promise on creating jobs, and suggested that the BJP government had slowed development in his constituency.

"You will get your food park back, not 99 per cent but 101 per cent. All development projects that have been stalled by Narendra Modi and Yogiji to hurt you will be back," he said.

"The BJP people are spreading hatred in the name of religion, caste and region. They get people of UP and Bihar thrown out of Gujarat, get Hindus and Muslims fight each other," he charged.

"Narendra Modi means hatred, he is the symbol of hatred," he said. "We will remove Modi in 2019 and no one can stop this."

Cong workers want Priyanka to take on Modi in Varanasi

The local unit of the Congress too demanded that Priyanka be pitted directly against Modi to galvanise voters of Uttar Pradesh and neighbouring states.

The posters featuring Priyanka Gandhi in the middle, Rahul on the top and local Congress leader Ajay Rai, who had contested against Modi in 2014, at the bottom, have come up across Varanasi.

The lines, 'Kashi Ki Janta Kare Pukar, Priyanka Gandhi Ho Sansad Hamar. We want Priyanka," were printed in bold letters in the centre of the posters.

Holding the posters and shouting slogans, some youth Congress workers also took out a march in the Lahurbir locality demanding that Priyanka be declared the party's candidate from Varanasi.

"The Congress party soldiers (workers) are ready to make her (Priyanka) win the elections from the temple town constituency... If she contests from here, the impact would be felt in the neighbouring states as well," Rai said.

"The wave of PM Modi has now faded as people want to get rid of the Modi-Shah misrule who have ruined the lives of scorers of small businessmen and rendered thousands of people jobless due to their faulty policies and chest thumping," he added.

Rai expressed confidence that the Congress would win the 2019 Lok Sabha elections as well as the 2022 assembly polls in Uttar Pradesh.

Criticising the the Union government's Pravasi Bharatiya Diwas event being held in Varanasi from January 21 to 23, the Congress leader questioned why the dates of the event were changed.

The event is held to pay respects to father of the nation Mahatma Gandhi, who returned to India from South Africa on January 9.

The BJP changed the dates to gain political mileage, he said.