Congress general secretary Priyanka Gandhi Vadra will address a public rally on October 10 in Varanasi, the parliamentary constituency of Prime Minister Narendra Modi, as Uttar Pradesh gears up for assembly elections early next year, a party spokesperson said on Friday. 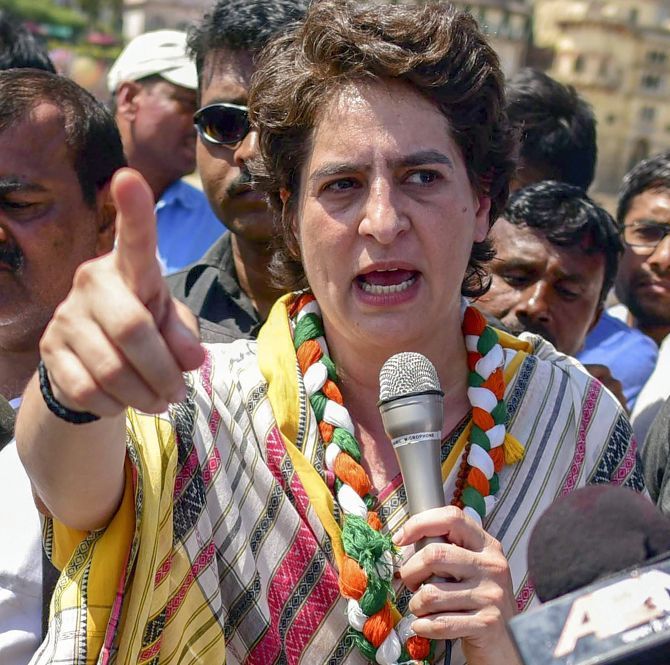 The Congress leader, who completed her five-day visit to the state capital on Friday, held meetings with party members in preparation for the electoral test early next year and will address a public rally on October 10 in Varanasi for which preparations are underway, party spokesman Anshu Awasthi said.

During her visit to the state, the Congress in-charge of UP affairs held meetings with leaders, office bearers and workers of different units of the party including the Youth Congress and took feedback from them for formulating the party's strategy for the elections, Awasthi said.

According to party spokesman Ahmed Khan, a grand rally will be held at the Jagatpur Inter College Ground in Varanasi.

The UP Congress is also working on the details of its 'Pratigya Yatra' and Gandhi is expected to address public meetings along its route especially at the divisional headquarters, the sources added.

The Congress is organising the public meeting in Varanasi soon after the resignation from the party of former MLA Lalitesh Pati Tripathi, the great-grandson of former UP chief minister Kamalapati Tripathi, who was considered close to the Gandhi family and had association with the party for four generations.

Tripathi's family is considered to be very influential in Varanasi, Chandauli and Mirzapur districts of the state and its members had represented the party in the Lok Sabha and assembly constituencies for long.

Lalitesh Pati Tripathi's decision to leave the Congress was considered to be a big setback for the party.

Earlier in June, former Union minister Jitin Prasada had resigned from Congress and joined BJP. He was recently sworn in as cabinet minister in the UP government and the governor also nominated him as member of the Legislative Council.

Congress spokesperson Javed Khan said the situation in UP has been deteriorating continuously in the last 32 years and the development of the state has been hampered. He said law and order has completely collapsed and Congress is continuously fighting against the "anti-people" policies of the BJP.

Gandhi, who had arrived here on Monday, attended the state election committee meeting of the party on Thursday where it was decided that the first list of candidates for the 2022 UP assembly polls will be released soon.

"The meeting of the state election committee was held in which it was decided that the first list of candidates will be released soon," a senior party leader had said.

The Congress had fought the 2017 assembly polls in alliance with the Samajwadi Party and won only seven of the 114 contested seats with a vote share of 6.25 per cent.

This time, the Congress has announced that it would fight the upcoming polls without aligning with any big political party.