Priyanka Gandhi was earlier actively involved in key decision making in the party along with her mother and brother, including the selection of new chief ministers for Rajasthan, Madhya Pradesh and Chhattisgarh recently. 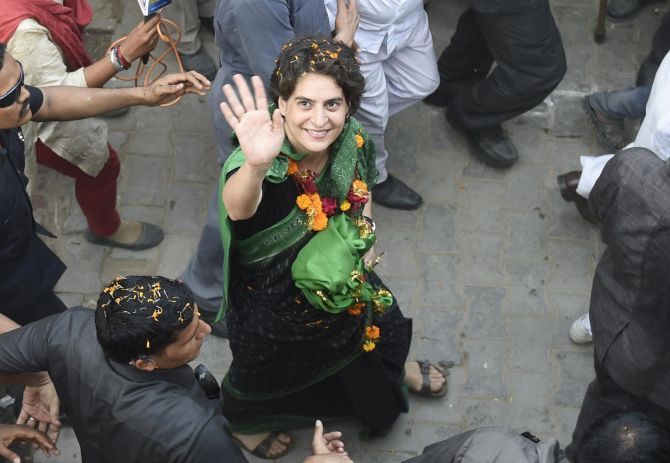 IMAGE: Priyanka Gandhi, 47, will take over her new assignment in the politically crucial state -- a Congress bastion till the mid 1980s -- from the first week of February. Photograph: Atul Yadav/PTI Photo

Signalling the Congress' intent to go full throttle in the state ahead of the high-stakes general elections, Priyanka's appointment immediately became a point of political debate with leaders of the Congress and its allies welcoming it saying she will be a 'great success' for the party while the Bharatiya Janata Party dubbed her entry into active politics 'as an admission by the Congress that its president Rahul Gandhi has failed in providing leadership'.

Priyanka will take over her new assignment from the first week of February, a statement from the party said. The 47-year-old will assist her brother, Rahul, in the Hindi heartland state, which was party's stronghold till the mid 1980s.

"I am very happy that my sister Priyanka will assist me in Uttar Pradesh in the Lok Sabha polls, she is very capable," Rahul said, adding, "We won't play on the back foot, we will play on the front foot, be it Gujarat or Uttar Pradesh."

"I feel this decision will help initiate new thought in UP and will bring a positive change in UP politics," he told reporters in Amethi.

'UP is central to building a new hope filled & compassionate India. The new UP All India Congress Committee team lead by Priyanka and Jyotiraditya, will herald the dawn of a new kind of politics in the state. We will offer the youth in UP a dynamic new platform to transform the state,' Gandhi later said on Twitter. In an apparent reference to her appointment, Modi said unlike 'many cases' where family is the party, for the BJP the party is family.

Interacting with BJP booth workers from Baramati, Gadchiroli, Hingoli, Nanded and Nandurbar in Maharashtra, Modi also said that in the BJP, decisions are not taken on the wishes of a person or family.

BJP spokesperson Sambit Patra said Rahul Gandhi has opted for family 'crutches' after facing rejection from other opposition parties. Another spokesperson Shahnawaz Hussain said the defeat of Congress is imminent and Priyanka's entry cannot stop that from happening.

Until now, Priyanka's political forays had been largely limited to appearing at campaign rallies in constituencies held by her family members in the state, which has 80 Lok Sabha seats, highest in any state.

Many in the Congress said her entry will infuse the much-needed fresh energy in the party workers of the state, where Congress influence has been waning over the years and where the Samajwadi Party and the Bahujan Samaj Party have announced a tie-up.

Congress leaders also feel that Priyanka will help draw crowds, especially the youth and bring back the upper castes and minority votes to the Congress fold. This, the party leaders feel, may also force the SP-BSP combine to work in tandem with a 'rechristened' Congress.

Asserting that he had no animosity against the SP and the BSP, Rahul Gandhi said, "Wherever we can work together to defeat the BJP we will...but our work is to create place for the Congress and for which we have taken a big step."

Party leaders said the responsibility for the state's 80 seats have been roughly divided 40-40 between Scindia and Priyanka Gandhi.

Long known as a natural in politics who inherited her grandmother Indira Gandhi's charisma, Priyanka Gandhi was earlier actively involved in key decision making in the party along with her mother and brother, including the selection of new chief ministers for Rajasthan, Madhya Pradesh and Chhattisgarh recently.

She was also instrumental in initiating the entry of Manpreet Badal and Navjot Singh Sidhu in the Punjab Congress.

The mother of two, Priyanka is married to Robert Vadra, who is embroiled in a land row in Haryana and Rajasthan, and is facing probes by the Enforcement Directorate.

'Congratulations P... always by your side in every phase of your life. Give it your best,' Vadra said in a Facebook post.

Welcoming Priyanka Gandhi's formal entry into politics, Congress leader and former Union minister R P N Singh, who belongs to eastern Uttar Pradesh, said she will 'definitely provide a big impetus to the fight against communal and casteist forces in the state'.

Prashant Kishor, vice president of the Janata Dal-United, described the appointment as Congress' general secretary for Uttar Pradesh East as 'one of the most awaited entries in Indian politics'.

Congress ally and Rashtriya Janata Dal leader Tejashwi Yadav welcomed the appointment, saying it will not only energise youth and party's cadre but also motivate 50 per cent woman population in politics.