UP police books Priyanka, 10 others for breach of peace

The Uttar Pradesh Police on Tuesday booked Congress leader Priyanka Gandhi Vadra and 10 others over apprehensions of breach of peace as opposition leaders attacked the Bharatiya Janata Party and the UP government over her detention in UP's Sitapur. 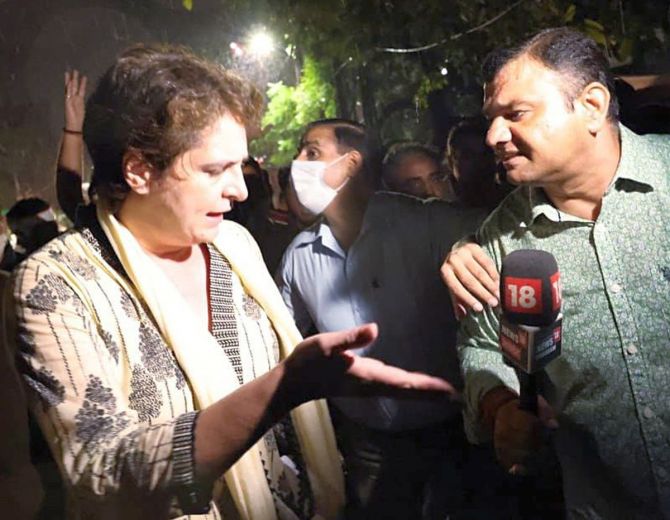 Senior party leader P Chidambaram, Chhattisgarh Chief Minister Bhupesh Baghel, Punjab Chief Minister Charanjit Singh Channi and Shiv Sena leader Sanjay Raut expressed support to Priyanka, who has alleged that no notice or first information report (FIR) has been given to her even after her 38-hour detention and was not allowed to meet her legal counsel.

Priyanka and other Congress leaders were detained on Monday on their way to meet families of the farmers killed in violence during a protest over UP Deputy CM Keshav Prasad Maurya's visit in Lakhimpur Kheri on Sunday.

Meanwhile, the last rites of three farmers were performed at their native places on Tuesday, while the family of the fourth one refused to cremate him, demanding a second autopsy.

According to a party leader, Priyanka talked to the kin of farmers over the phone and is firm in her resolve to go to Lakhimpur Kheri to meet them.

Attacking the Yogi Adityanath-led UP government, she told PTI that the Lakhimpur Kheri incident is not an isolated one and charged that the state government's reaction to people raising their voice has been consistently that of violence and suppression.

The Congress leader also hit out at Prime Minister Narendra Modi, who was on a visit to Lucknow for an event, and asked why is he is not going to Lakhimpur Kheri, which is just a 15-minute helicopter ride from here, to wipe the tears of families whose sons have been 'brutally murdered'.

Priyanka in a video asked PM Narendra Modi why the person behind the killing of four farmers in Lakhimpur Kheri has not been arrested yet while she has been under detention without any order or FIR.

Priyanka Gandhi shared a video on Twitter, which showed a group of protesting farmers being mowed down by an SUV.

The charges will be removed once they are assured that there will not be any breach of peace by them, Sitapur SDM Pyare Lal Maurya said.

They all are kept in detention in the guest house of the 2nd battalion of Provincial Armed Constabulary, he said.

The police action against her drew a sharp criticism, with Congress workers thronging the guest house.

Baghel sat on a dharna at the airport after being disallowed to meet Priyanka and visit the Uttar Pradesh Congress office.

In a statement, Chidambaram said the facts and circumstances concerning her detention 'conclusively establish that there is no rule of law in UP'.

Punjab CM Channi said, 'This is too much. It is unacceptable.'

"Today, the blood of all the countrymen is boiling," he said.

Shiv Sena MP Sanjay Raut called for a joint action by political parties against the detention of Priyanka and leaders of other parties.

Punjab Congress chief Navjot Singh Sidhu too warned that the party's state unit will march towards Lakhimpur Kheri if Priyanka is not released and Union Minister of State for Home Ajay Mishra's son not held for the "brutal murder" of farmers.

Meanwhile, the last rites of three farmers were performed at their native places, while the family of the fourth victim refused to cremate him, demanding a second autopsy.

The bodies were handed over to their families after a post-mortem on Monday.

The families of Lavpreet Singh, 19, Nachattar Singh, 65, and Daljeet Singh, 42, agreed to the cremation after hours of negotiations involving police officials and farmer leader Rakesh Tikait.

But the family of Gurvinder Singh, 22, of Matera tehsil refused to cremate him till a second autopsy is done and alleged that he was shot dead.

Eight people, including a journalist, were killed in the violence, claiming the lives of both farmers and BJP workers.

Farmer leaders have claimed that MoS Home Ajay Mishra's son Ashish Mishra was in one of the cars, which they alleged knocked down some protesters who were opposing the deputy CM's visit.