Declaring that the right of reputation cannot be protected at the cost of right of life and dignity, a Delhi court on Wednesday threw out former Union minister and editor M J Akbar's criminal defamation suit against journalist Priya Ramani who has accused him of sexual harassment. 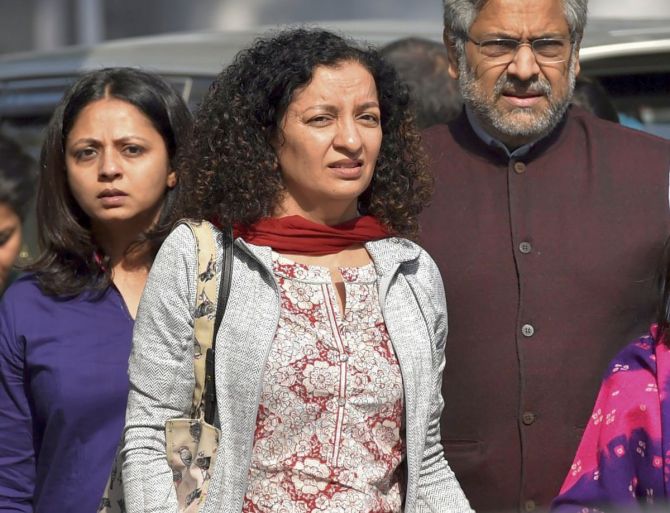 Delivering the landmark judgment being hailed as a watershed moment for the #MeToo movement against sexual harassment, the court maintained that a woman has the right to put forward her grievances before any platform of her choice even after decades.

A woman cannot be punished for raising her voice against such abuse, Additional Chief Metropolitan Magistrate Ravindra Kumar Pandey said as he dismissed Akbar's complaint and held that no charges were proved against Ramani.

The time has come for society to understand sexual abuse and harassment and their implications on victims, the judge said while acquitting the journalist. The court asked her to furnish a bail bond of Rs 10,000 in case of an appeal.

It feels great to have the truth validated before the court, a beaming Ramani told reporters after the verdict.

"It feels amazing, truly does. I feel vindicated on behalf of all the women who have ever spoken out against sexual harassment at the workplace. It was me the victim who had to stand up in the court as an accused," Ramani, who named Akbar in a tweet with reference to an article titled 'To the Harvey Weinsteins of the World' she had written in Vogue India in 2017, added.

The tweet was on October 8, 2018, when the #MeToo movement was gathering pace.

Seven days later, Akbar, a celebrated editor, filed a criminal complaint against her for allegedly defaming him by accusing him of sexual misconduct decades ago when he was a journalist.

Two days after that, on October 17, 2018, he resigned as minister of state for External Affairs and denied all the allegations of sexual harassment levelled by several women.

Delivering a 91-page verdict in the keenly followed case, the court said it is shameful that incidents of crime and violence against women are happening in a country where epics such as the Mahabharata and Ramayana were written around the theme of respect for women.

Accepting Ramani's contention that Akbar is not a man of stellar reputation on the basis of testimony of witnesses, the court said it cannot be ignored that the offence of sexual harassment and sexual abuse mostly takes place behind closed doors.

Despite how well respected some persons are in society, 'they in their personal lives could show extreme cruelty' to females, it added.

The court also made note of 'systematic abuse at workplace' due to the lack of mechanisms to redress grievances of sexual harassment at the time of the incident, before the Vishaka guidelines were issued and the enactment of The Sexual Harassment of Women at Workplace (Prevention, Prohibition and Redressal) Act, 2013.

'The 'glass ceiling' will not prevent the Indian women... for their advancement in the society, if equal opportunity and social protection be given to them,' it said.

The court referred to 'social stigma' and 'shame' attached with the sexual harassment of women and the trauma they have to face.

Sometimes, victims of sexual abuse don't speak a word for many years, the judge said, adding, "The victim may keep believing that she is at fault and victim may live with that shame for years or for decades."

The sexual abuse takes 'away her dignity and her self confidence', the court said.

Reacting to the verdict, Ramani's lawyer Rebecca John said it was perhaps the most important case of her career.

"It was an extremely difficult trial. When you fight powerful people and you have only truth on your side, the journey becomes very very relevant to you personally," she told reporters.

As the case drew to a close after two years, scores of women activists, lawyers, showbiz celebrities and civil society members welcomed the decision which they was an empowering one that would give courage to more women to speak up against abuse and exploitation.

'Bravo #PriyaRamani. Your abuser @mjakbar hit you with a SLAP suit but you stand vindicated. Verdict empowers women, saying we should understand that sometimes a victim may for years not speak up due to mental trauma, cannot be punished for raising her voice against sexual abuse,' said Kavita Krishnan, secretary of the All India Progressive Women's Association.

'Congratulations to Priya Ramani and her able legal team led by Rebecca John, a big win for women in general and for her in particular. Thank you Priya for speaking up when you did. This is a big victory for the #MeToo movement,' she tweeted.

Thappad star Taapsee Pannu said the verdict had instilled her faith in justice at a time when the world looked bleak.

'Amidst all the wrongs and unfair happening around, this did bring a ray of hope that somewhere something is keeping our hope in righteousness alive. Long live truth and justice,' she wrote on Twitter.

'This is spectacular. A milestone judgement when it comes to sexual harassment. Important that the court points out that it's not time-bound. Amazing #PriyaRamani #Rebeccajon,' he tweeted.

Screenwriter-editor Apurva Asrani said Ramani's acquittal is a 'relief' for those women who found the courage to call out their abusers but said it's only half the battle won.

'MJ Akbar must be held accountable for the harassment that she has endured. #MeToo,' he wrote.