A Land Rover that Prince Philip, the Duke of Edinburgh, helped design over 15 years ago will be at the centre of his pandemic-induced scaled-back ceremonial funeral procession at Windsor Castle in south-east England next Saturday, according to details released by Buckingham Palace. 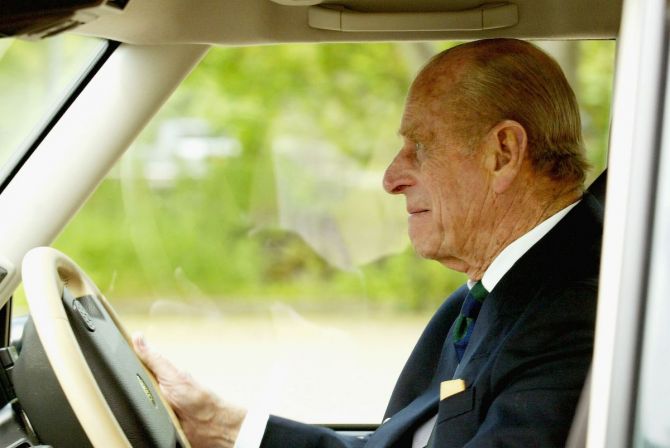 The vehicle is believed to be a modified Defender 130 Gun Bus, which was commissioned for use by the Queen's late husband in 2005 -- three years before the British luxury brands Jaguar and Land Rover were taken over by Tata Motors.

“At Jaguar Land Rover, we are deeply saddened by the passing of His Royal Highness The Prince Philip, Duke of Edinburgh,” a JLR statement read.

“Our thoughts and condolences are with Her Majesty The Queen and the Royal Family at this time. His Royal Highness devoted his life to public service and made a significant contribution to British manufacturing, engineering and design,” it said.

The coffin of the senior royal will be loaded into the Land Rover for an eight-minute procession to the gates of St George's Chapel, where the funeral is to begin with a national minute's silence at 1500 local time on April 17.

“His Royal Highness's coffin will be carried in a purpose-built Land Rover, which The Duke was involved in the design of, flanked by military pall bearers, in a small ceremonial procession from the state entrance to St George's Chapel, for the funeral service. Members of the Royal Family and The Duke of Edinburgh's Household will walk behind the coffin,” a Buckingham Palace statement said.

“The plans for the funeral are in line with The Duke of Edinburgh's own personal wishes, and the occasion will recognise and celebrate The Duke's life and his more than 70 years of service to The Queen, the UK and the Commonwealth,” it said.

A senior royal aide told ‘The Sunday Times' that Prince Philip would have been pleased with the relatively low-key sendoff.

“The Duke would have been delighted there won't be able to be as much fuss because of Covid. He'd have thought: ‘That's a coup',” the aide said.

The morning after the funeral will mark the conclusion of the UK's week-long national mourning, in keeping with which the Indian high commission in London confirmed the postponement of a planned Baisakhi celebration on Tuesday.

“In view of the sad demise of Duke of Edinburgh, the proposed event to celebrate Baisakhi and other festivals on 13th April stands postponed,” the high commission said.

The royal funeral is to be broadcast live and the public has been cautioned that anyone gathering at Windsor Castle on the day would not be able to view anything. In keeping current COVID-19 lockdown guidelines, only 30 guests will be in attendance and UK Prime Minister Boris Johnson has given up his space for a member of the royal family.

"The Prime Minister has throughout wanted to act in accordance with what is best for the royal household, and so to allow for as many family members as possible will not be attending the funeral on Saturday," a 10 Downing Street spokesperson said.

Under normal circumstances, around 800 guests would have gathered for the funeral, including heads of government and state from around the world. But now with a 30-member limit, only the Queen's closest family, including her four children and their spouses as well grandchildren will be in attendance.

It has been confirmed that grandson Prince Harry will fly down from the US to attend but heavily-pregnant wife Meghan Markle has been advised by her doctors to not make the journey.

Prince Charles, the eldest son and heir of the Queen, will be among the royals who will walk behind his father's funeral procession. He paid an emotional tribute to his ‘dear papa’ in a speech from his home at Highgrove in Gloucestershire, south-west England, on Saturday.

“My father for I suppose, the last 70 years, has given the most remarkable, devoted service to the Queen, to my family, and to the country and also to the whole of the Commonwealth," said Charles, the Prince of Wales.

He added: “And as you can imagine, my family and I miss my father enormously, he was a much-loved and appreciated figure, and apart from anything else, I can imagine he'd be so deeply touched by the number of other people here and elsewhere around the world in the Commonwealth who also, I think, share our loss and our sorrow.

"And my dear Papa was a very special person who I think, above all else, would have been amazed by the reaction and the touching things that are being said about him. And from that point of view we are, my family, deeply grateful for all that, it will sustain us in this particular loss and at this particularly sad time."

Prince Charles had begun accompanying the Queen on several royal engagements, including for the ceremonial state opening of Parliament, after his father officially retired from royal duties in 2017, a role set to be enhanced further.

Meanwhile, as parliamentarians prepare for a special tribute sitting of the House of Commons on Monday, there is growing cross-party support for a statue as a permanent memorial to the late Prince Philip on The Mall -- the road leading up to Buckingham Palace from Trafalgar Square in London.