The royal ceremonial funeral of Britain’s Prince Philip, the Duke of Edinburgh, will incorporate hymns and readings chosen by the late royal himself and focus on his ‘unwavering loyalty’ to wife Queen Elizabeth II and service to Britain and the Commonwealth. 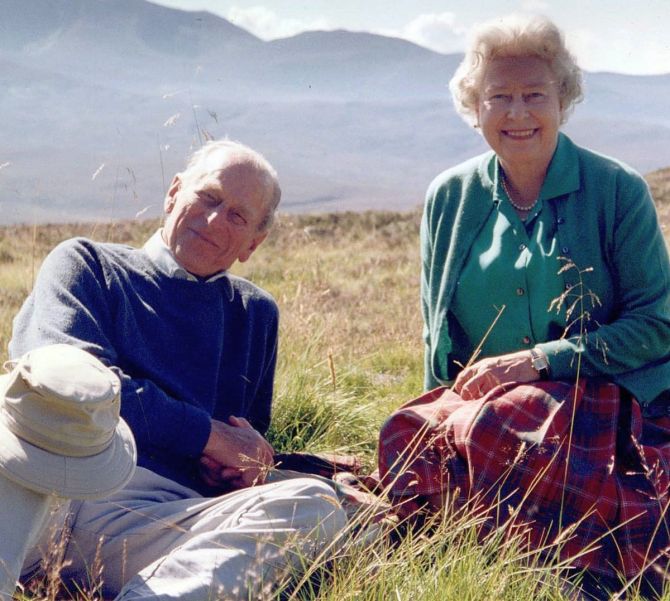 IMAGE: The Queen shared this as one of her favourite photographs of herself with her husband of 73 years, the Duke of Edinburgh, before his funeral. The royal couple are pictured relaxing on the grass at a beauty spot in Aberdeenshire in the photo taken by the Countess of Wessex in 2003. Photograph: Countess of Wessex/@RoyalFamily/Twitter

The ceremony, which officially begins at St George's Chapel in Windsor Castle with a national minute's silence at 1500 local time on Saturday, will be a religious one though without any sermons, as planned by the Duke, who passed away aged 99 last week on Friday.

“The Order of Service for the funeral was agreed with the Duke of Edinburgh during his lifetime, and reflects the Duke's military affiliations, and personal elements of His Royal Highness' life,” Buckingham Palace said in a statement on Saturday.

In his reading, the Dean of Windsor will say: "With grateful hearts, we remember the many ways in which his long life has been a blessing to us.

The Queen marked the day with the release of one of her favourite photographs of her sitting on the grass alongside her late husband enjoying a day out in Scotland. The 94-year-old monarch was married to Prince Philip for 73 years and has previously referred to him as her "strength and stay".

The service at the chapel on Saturday will be led by the Dean of Windsor and prayers will be said by the Dean and the Archbishop of Canterbury. A small choir of four will sing pieces of music chosen by the Duke and, in line with the coronavirus lockdown guidelines, the gathering has been asked not to sing along as is usual congregational ceremonies.

No members of the royal family will give a reading and the entire congregation has been limited to just 30 people, who will be wearing face masks and remain socially distanced.

Downing Street has said that UK Prime Minister Boris Johnson, like thousands others, will watch the service on a television from his countryside retreat Chequers after he had given up his place as a guest to the royal family.

Among the songs picked out is the hymn ‘Eternal Father, Strong To Save', traditionally associated with members of the Royal Navy such as the Duke.

According to details of the ceremonial funeral released by Buckingham Palace earlier in the week, the Duke's coffin will travel in a bespoke Land Rover designed by him, with his children and grandchildren walking alongside.

Those in the procession will include Prince Charles, the Prince of Wales, Princess Anne, the Princess Royal, Prince Andrew, the Duke of York, and Prince Edward, the Earl of Wessex and Forfar. Grandchildren Princes William and Harry, said to be somewhat estranged, will also be walking behind the vehicle separated by their cousin Peter Phillips, the son of Princess Anne.

Vice Admiral Sir Tim Laurence, the husband of Princess Anne, and the Earl of Snowdon, the son of the Queen sister, will also be among those who follow the funeral procession.

The Queen will travel in the State Bentley in the procession, behind the family members on foot, before entering by a side door to the chapel. Inside, she will be seated by herself under the social distancing guidelines.

Others on the limited guest list include Prince Charles' wife Camilla, Duchess of Cornwall, Prince William's wife Kate Middleton, all of Prince Philip's grandchildren and their spouses, and the children of the Queen's sister Princess Margaret.

From the Duke's German heritage, the guests include Bernhard, the Hereditary Prince of Baden; Donatus, Prince and Landgrave of Hesse; and Prince Philipp of Hohenlohe-Langenburg. The Countess Mountbatten of Burma, previously known as Lady Romsey and Lady Brabourne, who was one of Prince Philip's closest friends, will also be in attendance.

There will be a significant military theme to the funeral as the procession route will be lined by representatives from the Royal Navy, the Royal Marines, the Highlanders, and 4th Battalion Royal Regiment of Scotland and the Royal Air Force. Minute Guns will be fired by the King's Troop Royal Horse Artillery from the East Lawn of Windsor Castle for the duration of the procession. A selection of military medals, picked by the Duke himself, will appear on the altar inside the chapel.