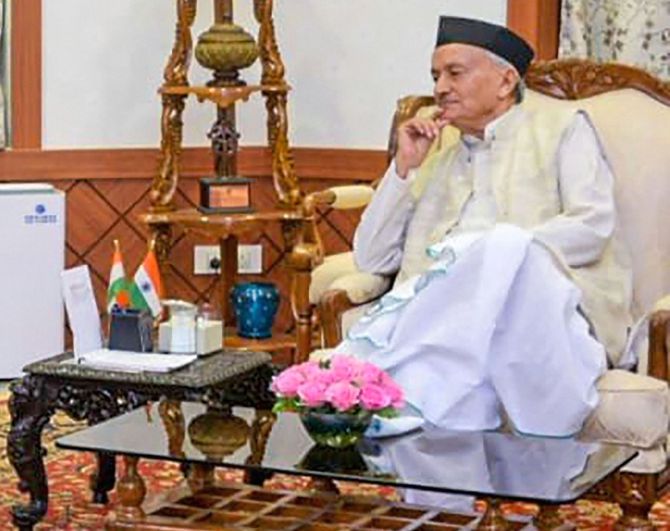 Imposition of President's rule in Maharashtra on Tuesday is the first instance in the 59-year-old history of the state when Article 356 has been invoked due to inability of political parties to form a government after an assembly election.

Overall, this is third time that Maharashtra has come under the central rule.

The present-day Maharashtra came into existence on May 1, 1960.

In the October 21 assembly election, whose results were declared on October 24, the Bharatiya Janata Party emerged as the single largest party with 105 seats followed by the Shiv Sena 56, the Nationalist Congress Party 54 and the Congress 44.

Pre-poll allies, the BJP and the Shiv Sena had together won 161 seats, way above the 145 majority mark in the 288-member house.

But intense power tussle over chief minister's post created a wedge between the now erstwhile saffron partners and delayed the formation of government.

After this, the governor asked the Shiv Sena, the second largest party, to "indicate the willingness and ability" to form government.

On Monday, the Uddhav Thackeray-led party met the governor and expressed willingness to form the government, but failed to submit requisite letters of support from rival outfits to show it has the numbers.

However, this is only the third instance of imposition of President's rule in the state.

Assembly election held in June that year saw the Congress returning to power in the politically important state and A R Antulay becoming chief minister.

He had formed the PDF after toppling the Vasantdada Patil-led Congress government in 1978. Pawar was a minister in the Patil government.

Gandhi dismissed the PDF government after returning to power at the Centre in the 1980 Lok Sabha polls.

The state saw the second spell of President's rule after 34 years.

President's rule was imposed after Prithviraj Chavan resigned as chief minister following withdrawal of support by ally NCP to the Congress-led government on September 28, 2014.

The two allies had drifted apart on the issue of equal sharing of assembly seats and chief minister's post.

The 2014 assembly election was held when the state was under President's rule.

After the assembly election of October 2014, the BJP came to power under Devendra Fadnavis and the Sena later joined his government.

The BJP and the Sena had fought that election separately.

As per a statement tweeted by the Governor's office, "He is satisfied that the government cannot be carried on in accordance with the Constitution, (and therefore) has today submitted a report as contemplated by provision of Article 356 of the Constitution."

Article 356 of the Constitution, under which President's rule is imposed in a state, deals with 'failure of constitutional machinery in the state'.

The Union Cabinet on Tuesday recommended President's rule in Maharashtra.

Hence, this is the first time that central rule has been imposed in the state due to inability of political parties to form a government after an assembly election.