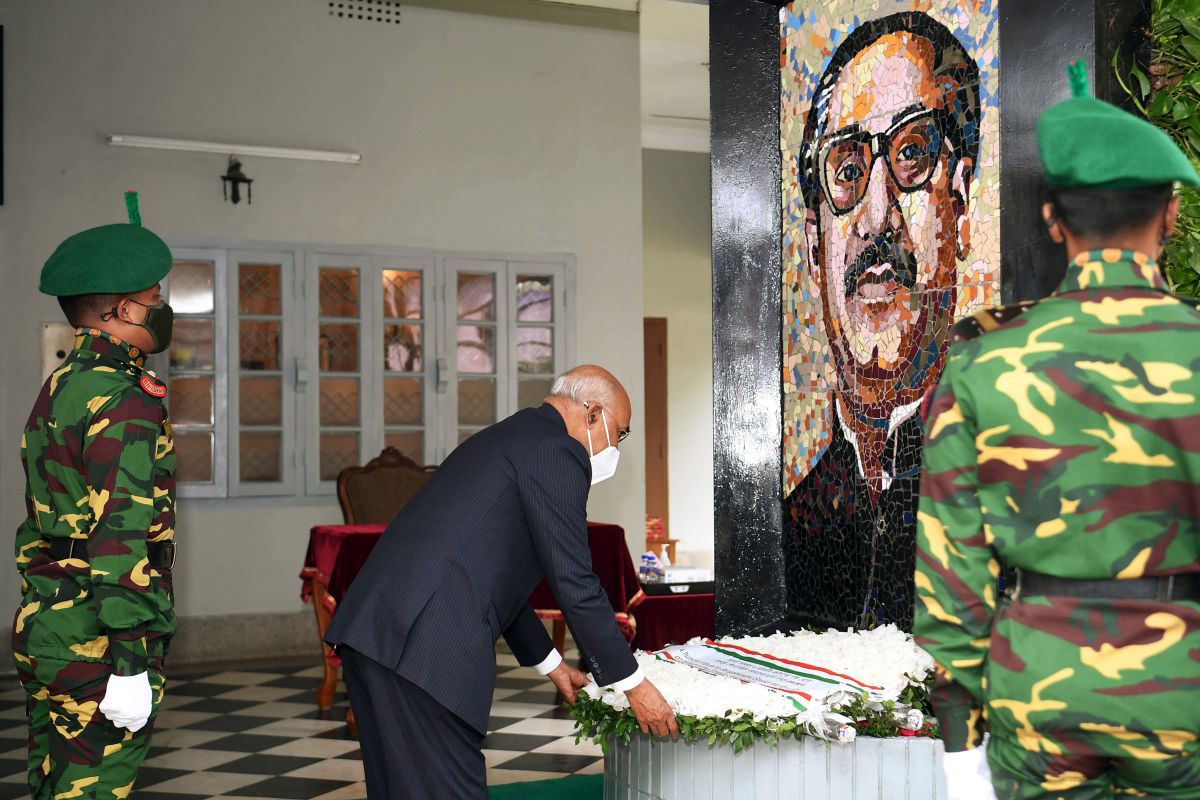 Kovind is in Bangladesh on a three-day State Visit during which he will hold talks with his counterpart and attend the golden jubilee celebrations of Bangladesh's independence from Pakistan in 1971.

The President, who was accorded a red carpet welcome upon his arrival here in the morning, visited Bangabandhu Sheikh Mujibur Rahman Memorial Museum at the capital's Dhanmondi area and paid homage to Bangladesh's founding father.

Earlier, a 21-gun salute heralded the arrival of Kovind as he disembarked from the special Air India One flight along with his wife Savita Kovind and daughter Swati Kovind alongside an official delegation.

The Bangladesh Army, the Navy and the Air Force personnel offered him a guard of honour as part of the welcome ceremony at the airport from where he was escorted to the National Memorial at Savar on the outskirts of the capital in a motorcade.

Army bugles played the Last Post as Bangladesh's national flag was lowered and revealed again as part of a ceremony when President Kovind placed wreaths at the memorial in memory of Bangladesh's nine-month-long 1971 Liberation War martyrs.

"May the spirit of those who sacrificed their lives to realise the ideals of the Liberation War continue to guide our thoughts and actions" President Kovind @rashtrapatibhvn pays tributes at the National Martyrs' Memorial to the brave hearts of the Liberation War of Bangladesh," Bagchi said in another tweet.

He said that President Kovind also paid rich tributes to the 1971 martyrs. The war also claimed the lives of many Indian soldiers alongside Bangladeshi freedom fighters and unarmed civilians, including children and elderly men.

It is President Kovind's first trip abroad since the outbreak of the COVID-19 pandemic. He will represent India as the guest of honour in Bangladesh's 50th Victory Day celebrations here.

In a reflection of close ties, India is also hosting a number of events to mark the 50th anniversary of the 1971 India-Pakistan war that led to the liberation of Bangladesh.

After the nine-month long war, the Pakistani troops unconditionally surrendered to India-Bangladesh allied forces in Dhaka marking its emergence as the free capital of a free country though Bangladesh proclaimed its independence on March 26, 1971.