Power supply has been restored to several areas in Kashmir valley, which had plunged into darkness because of collapse of the power infrastructure due to heavy snowfall.

"Power supply in several areas of Kashmir valley has been restored. we hope to restore electric supply in more areas in valley by Sunday evening", the Minister of State for Power Shabir Khan told PTI.

Cut off from the rest of the country due to closure of Jammu-Srinagar National highway, normal life in Kashmir came to grinding halt with power,water, internet and communication services badly hit by the heavy snowfall on Saturday.

There was a major power supply failure in the Kashmir Valley in view of the major transmission lines at Pir Panchal ranges and several grid stations being affected by heavy snowfall. "As there is better weather, there would better output on the work also," Khan said.

Jammu and Kashmir Chief Minister Omar Abdullah on Saturday flew to Srinagar to take stock of the situation in the Valley after the snowfall. He was told that 15 grid stations have been affected by the snowfall in the Valley besides damaging transmission lines at five places including one at Chenani.

Immediately after his arrival at Srinagar when the chief minister reached his Gupkar residence, he found that electricity was on in his house and nearby VIP areas while as the same was not available in other parts of the Valley. He immediately directed disconnection of power supply to his house and these VIPs areas till the supply to the entire Valley is restored.

The chief minister directed Power Development Department to give preference to hospitals and essential installations in supplying electricity till damage caused to transmission lines as a result of snowfall is repaired and electricity is restored.

Soon after reaching Srinagar, the CM rushed to the Power Development Department headquarters at Bemina and received a first-hand appraisal of the damage caused to power installations. 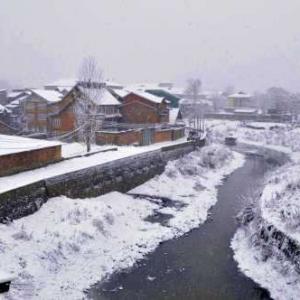 Omar snaps power supply to VIP homes including his residence