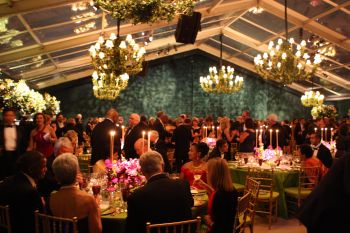 Scores of Indian American politicians, administration officials, media personalities and activists were among the 320 guests at the first state dinner of the Barack Obama presidency in honour of Prime Minister Dr Manmohan Singh and Mrs Gurcharan Kaur, which had been moved from the East Room -- which can accommodate a maximum of about 160 guests to the South Lawn (under a massive tent reminiscent of when President Bill Clinton hosted a state dinner for former Prime Minister Atal Bihari Vajpayee in the fall of September 2000 which had a record 700 plus guests).

The dinner, which had been moved to the South Lawn because of the clamor of the elite in Washington society, US lawmakers, and the high and mighty in the Indian American community, particularly the high-rollers in the Obama campaign, not to mention Hollywood and Bollywood stars, also had among the invitees some of India's leading industrialists and entrepreneurs, including Ratan Tata, Mukesh Ambani, Sunil Bharti Mittal, Kiran Mazumdar Shaw, Deepak Parekh, Preetha Reddy and Chanda Kochchar. All of them were also present at the arrival ceremony of Dr Singh and his wife at the White House, which was moved from the South Lawn to the East Room because of inclement weather.

Also, omnipresent as ever was the high profile Indra Nooyi, chairman and CEO of PepsiCo, who was seated on President Obama's table along with Senator John F Kerry, chairman of the Senate Foreign Relations Committee, US Ambassador to India Timothy Roemer, and David Geffen. Earlier, in the day, at the luncheon hosted by Vice President Joe Biden and Secretary of State Hillary Clinton for the Prime Minister at the State Department, Nooyi was at the head table seated next to Dr Singh.

Other higher profile Indian American CEOs present were Farooq Kathwari, chairman and CEO of Ethan Allen and his wife Farida; and Rajat Gupta, chairman emeritus of McKinsey and Company and his wife Anita.

An Obama campaign high-roller, venture capitalist Kamil Hasan, chairman and CEO of Hitek Ventures, who had been invited but couldn't make it since he was away in India on business, nor could his wife Talat, since she was under the weather.

San Francisco District Attorney, Kamala Harris, who is running for Attorney General of California, and who has often been dubbed 'the female Barack Obama,' and is also a close friend and early supporter of Obama for president, was also in attendance with her sister Maya Harris, and so was the president of the American Association of Physicians of Indian Origin, Dr Vinod 'Vinny' Shah, who is a close friend and neighbor and is the consulting physician to House Majority Leader Democrat Steny Hoyer of Maryland -- in which state Shah and his family run the largest practice -- who had got himself an invite thanks to Hoyer.

The current and former co-chairs of the Congressional Caucus on India and Indian Americans in the House of Representatives like Democratic Representatives Gary Ackerman of New York, Jim McDermott of Washington state, Republican Ed Royce and their spouses were also in attendance, although erstwhile Caucus GOP co-chair Congressman Joe Wilson of South Carolina who screamed "You lie," at President Obama as he was delivering an address to a Joint Session of Congress on Health Care some months ago, was not among those invited.

On the Senate side, besides Kerry, Senator Richard Lugar, ranking Republican on the Senate Foreign Relations Committee came with his wide, as did US Senate India Caucus co-chair Senator Christopher Dodd.

Besides Jindal, Governors Jennifer Granholm of Michigan, Deval Patrick of Massachusetts, Edward Rendell of Pennsylvania, Bill Richardson of New Mexico, were also on hand to greet the Prime Minister.

Hollywood was represented by Steven Spielberg, Blair Underwood and Jeffrey Katzenberg of Dreamworks while Bollywood had Oscar winner A R Rahman -- of Slumdog Millionaire fame -- who also provided part of the entertainment that also included Jennifer Hudson, Kurt Elling, Marvin Hamlisch, the National Symphony Orchestra and the President's Own United States Marine Band. 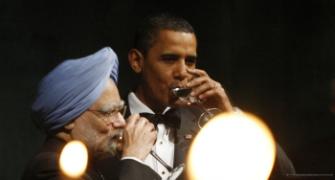 Pix: Obama throws a party for Dr Singh
US wants Pak to show results on 26/11 prosecution 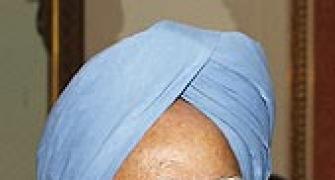 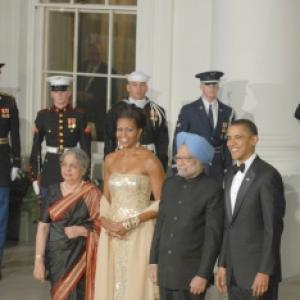 Obama hails 'friendship between a President and a PM' 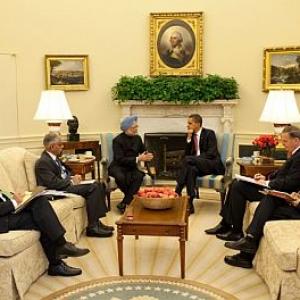 Those behind 26/11 must be punished: Obama