A day after Cyclone Yaas tore through coastal Odisha and Bengal to cause havoc as far as Jharkhand, tornadoes, torrential rains, bridge collapses and swelling rivers continued to plague eastern India as people tried to pick up their lives amid the debris of swept away mud homes and swamped farmlands. 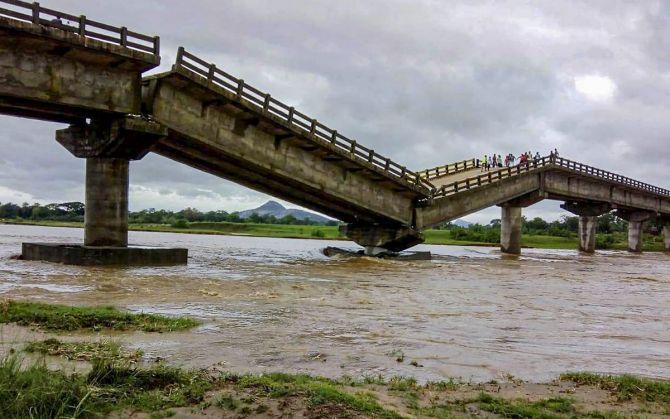 IMAGE: A bridge at river Kanchi after it collapsed due to heavy rain triggered by cyclone Yaas, in Tamar area of Ranchi, on Thursday. Photograph: PTI Photo

Prime Minister Narendra Modi met top officials in Delhi on Thursday to assess the impact of the cyclone.

He will be visiting affected areas in Odisha and Bengal to hold review meetings in the two states on Friday.

Cyclone Yaas pounded parts of India's eastern coast on Wednesday, killing at least four people on Wednesday and forcing more than 21 lakh people to be evacuated to safe shelters in West Bengal, Odisha and Jharkhand.

Odisha Chief Minister Naveen Patnaik did an aerial survey of districts which bore the brunt of the Yaas landfall on Thursday and placed four of them on high alert as the river Baitarani started swelling above the danger mark with cyclone induced heavy rains.

"The relief, restoration and rehabilitation works need to be done on a war-footing," Patnaik said after the survey.

"We are expecting a medium range flood in the river Baitarani which may affect three major districts like Bhadrak, Jajpur and Kendrapara," Special Relief Commissioner (SRC) P K Jena said, adding Keonjhar may also be affected. 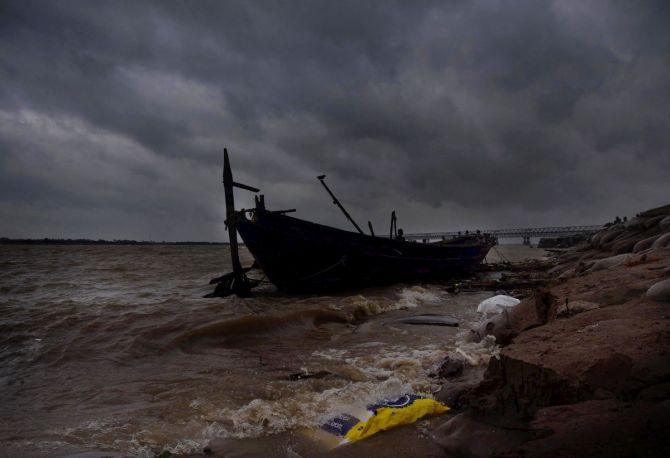 IMAGE: Dark clouds hover over the River Ganga in the aftermath of Cyclone Yaas landfall in Patna, on Thursday. Photograph: PTI Photo

As the water requires at least 6 hours to reach Akhuapada, it is expected that the water level will rise by another one metre by Friday.

The district administration of Bhadrak and Jajpur have already started evacuating people from the low laying area on the banks of river Baitarani, with district collectors personally monitoring the situation.

The SRC also said that door-to-door survey will be expedited as COVId-19 infection is likely to increase after the cyclone.

Those who have symptoms will be tested. The Health Department will take the necessary steps in this regard, said Jena.

Patnaik has also announced a seven-day relief for 128 villages in Balasore and Bhadrak districts that were marooned by the tidal surge and heavy downpour on Tuesday and Wednesday.

West Bengal Chief Minister Mamata Banerjee who also carried out reviews of the flood situation said the state had losses to the tune of Rs 15,000 crore on account of the cyclone, and announced the launch of her 'Duare-Tran (relief at doorstep) scheme next month, aimed at reaching out to the affected people. 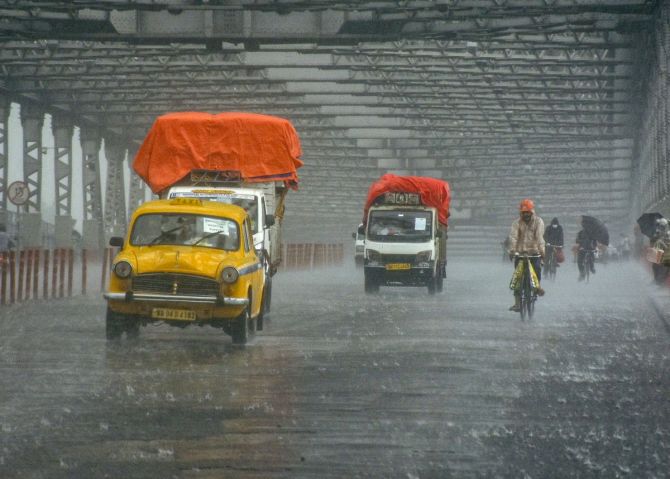 Banerjee also allotted Rs 1,000 crore for relief work to be undertaken in the cyclone-hit areas, and said that more funds would be doled out if necessary.

"Going by the initial reports, we have found out that West Bengal has incurred a total loss of around Rs 15,000 crore. It will probably go up.

"We need to conduct field survey which is still not possible as most of the places lie inundated. It will take some time (to get a final estimate)," she said.

The chief minister also alleged that the centre had failed to provide financial aid for last years super cyclone Amphaan which had hit Bengal, causing estimated losses to the tune of Rs 37,000 crore.

The state continued to get heavy post-cyclone showers and a tornado was reported from Ashoknagar in North 24 Parganas.

Interestingly, tornadoes had also hit Pandua, Bandel, Chinsurah in Hooghly district and Halisahar in North 24 Parganas a day before Yaas made its landfall on the Odisha coast. 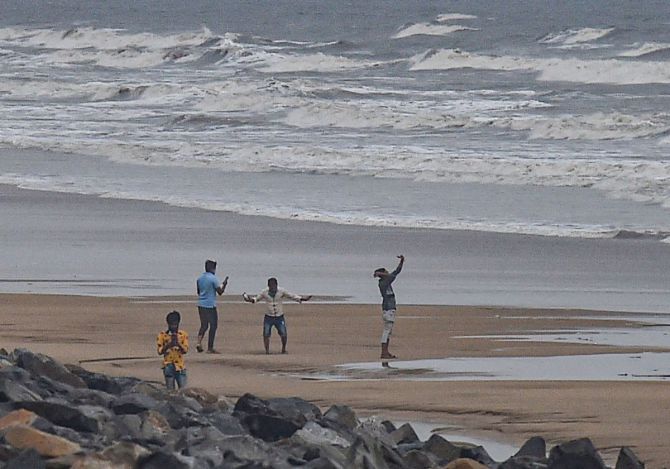 IMAGE: Locals visit a beach in the aftermath of Cyclone Yaas, at Digha in East Midnapore district, on Thursday. Photograph: Swapan Mahapatra/PTI Photo

At least five persons were also killed in West Bengal on Thursday in separate incidents lightning strike and electrocution incidents, an official of the state disaster management department said.

The Met department said that 75 mm rainfall was recorded at Alipore in Kolkata while Malda recorded the highest rainfall in the state at 140 mm.

Possibility of heavy rain will persist as long as a depression, the remnant of very severe cyclonic storm 'Yaas', exists in the vicinity of West Bengal, deputy director of the regional Met Centre in Kolkata, Sanjib Bandopadhyay, said.

"All districts of West Bengal will experience thunderstorms with isolated heavy rain," he said, adding that the intensity of rain will decrease from Friday morning.

Chief Wildlife Warden V K Yadav told PTI in Kolkata most of the 40 protection camps of forest department in Sunderbans are inundated.

A forest department report said there was report of tiger straying into Paikpara, Moipith, Nalgora beat and Raidighi range, since the cyclone Yaas hit coastal areas. IMAGE: A devotee reinstalls an idol of Lord Jagannath at a Cyclone Yaas affected area of Udaypur beach, near Digha in East Midnapore district, on Thursday. Photograph: Swapan Mahapatra/PTI Photo

Jharkhand had a major bridge on river Kanchi that connects Bundu with Tamar near Ranchi, collapsing as torrential rains saw the rivers in the tribal state in spate.

Two people also died in capital Ranchi as their house collapsed amid incessant rainfall under the impact of cyclone 'Yaas'.

At least 5,000 more people were evacuated from low-lying areas near rivers flowing above the danger mark in East Sighbhum, in addition to the 15,000 who were shifted to safer shelters.

Close to eight lakh people have been affected by the cyclone and copius rain triggered by it, officials said.

R K Jenamani, a senior scientist of IMD, said the cyclone, which has now weakened into a depression, is hovering over south Jharkhand, 75 km west of Jamshedpur.

"We have issued alerts for extremely heavy rainfall in certain places. In the last 24 hours, Chaibasa witnessed 207.8 mm rain, Mandar near Ranchi 182.2 mm, and the capital city 151 mm," he said.