Pope Francis has said that Republican presidential front-runner Donald Trump cannot claim to be a Christian, criticising his comments on immigration in particular building a wall along the US-Mexico border. 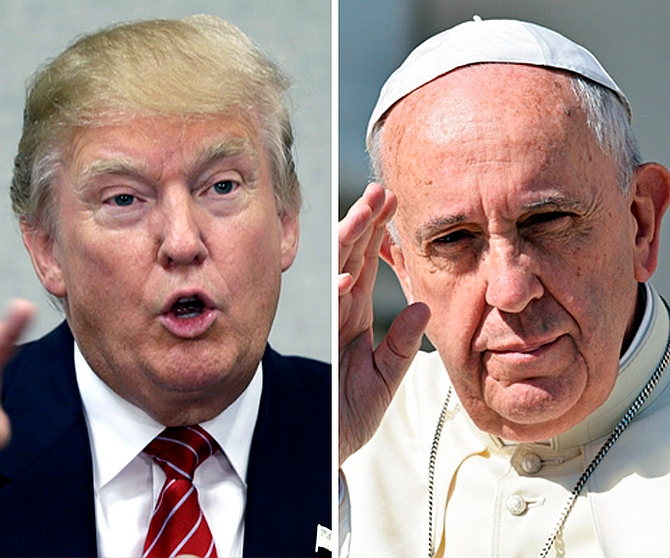 Pope's comment, which immediately drew sharp reaction from Trump, came in an interaction with reporters travelling on his plane on his way back to Vatican from Mexico where he visited this week.

"Can a good Catholic vote for this man?" a reporter asked Pope Francis referring to the recent statements of Trump on immigration, deporting illegal immigrants and building a wall along the US-Mexico border to prevent illegal immigration.

"Thank God he said I was a politician, because Aristotle defined the human person as 'animal politicus.' So at least I am a human person. As to whether I am a pawn - well, maybe, I don't know. I'll leave that up to your judgment and that of the people," the leader of the 1.2 billion Catholics of the world responded.

"And then, a person who thinks only about building walls, wherever they may be, and not building bridges, is not Christian. This is not in the gospel," the pontiff said.

"As far as what you said about whether I would advise to vote or not to vote, I am not going to get involved in that. I say only that this man is not Christian if he said things like that. We must see if he said things in that way and in this I give the benefit of the doubt," Pope Francis said.

Trump, who was campaigning in South Carolina ahead of the crucial primary on Saturday, responded immediately in his characteristic style. He described this as "disgraceful."

"For a religious leader to question a person's faith is disgraceful," Trump said.

"I am proud to be a Christian and as President I will not allow Christianity to be consistently attacked and weakened, unlike what is happening now, with our current President," Trump said at a rally Kiawah Island in South Carolina.

He said no leader, especially a religious leader, should have the right to question another man’s religion or faith.

"They are using the Pope as a pawn and they should be ashamed of themselves for doing so, especially when so many lives are involved and when illegal immigration is so rampant," he said.

"If and when the Vatican is attacked by ISIS, which as everyone knows is ISIS' ultimate trophy, I can promise you that the Pope would have only wished and prayed that Donald Trump would have been President because this would not have happened," Trump said.

Trump said the Mexican government and its leadership have made many disparaging remarks about him to the Pope.

"The Pope only heard one side of the story -- he didn’t see the crime, the drug trafficking and the negative economic impact the current policies have on the US. He doesn’t see how Mexican leadership is outsmarting President Obama and our leadership in every aspect of negotiation," he said.

Source: PTI© Copyright 2020 PTI. All rights reserved. Republication or redistribution of PTI content, including by framing or similar means, is expressly prohibited without the prior written consent.
Related News: Donald Trump, Christian, Pope Francis, ISIS, US
SHARE THIS STORY
Print this article