Pompeo, Esper to arrive in India for 2+2 dialogue on Mon

United States Secretary of State Mike Pompeo and Defence Secretary Mark T Esper will arrive in New Delhi on Monday for the third edition of the two-plus-two ministerial dialogue which is taking place just a week ahead of the American presidential election and in the midst of India's festering border row with China. 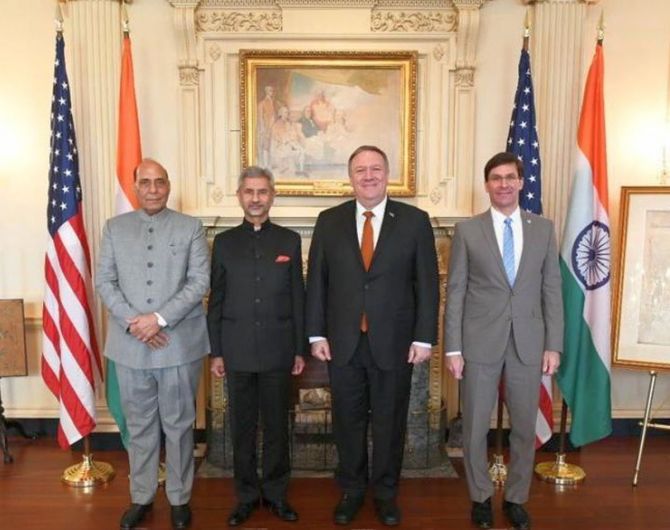 The two-plus-two dialogue will be held on Tuesday.

A host of crucial bilateral, regional and global issues including China's efforts to expand influence in the Indo-Pacific region as well as its aggressive behaviour in eastern Ladakh is likely to figure in the talks.

In the last few months, the US has been ramping up attack on China over a range of contentious issues including the border row with India, its military assertiveness in the South China Sea and the way Beijing handled the anti-government protests in Hong Kong.

Pompeo and Esper will have bilateral meetings with their Indian counterparts as well.

They are also scheduled to make a joint call on Prime Minister Narendra Modi.

Officials said US Secretary of Defence Esper will be given a tri-services guard of honour at the lawns of South Block in the Raisina Hills on Monday afternoon.

It is expected that the two sides may finalise the long-pending BECA (Basic Exchange and Cooperation Agreement) agreement to further boost bilateral defence ties.

The BECA will provide for sharing of high-end military technology, logistics and geospatial maps between the two countries.

In June 2016, the US had designated India a 'Major Defence Partner' intending to elevate defence trade and technology sharing with India to a level commensurate with that of its closest allies and partners.