Polls after delimitation, statehood to follow: Amit Shah in Kashmir

In his first visit to Jammu and Kashmir after the repeal of Article 370, Union Home Minister Amit Shah on Saturday met the kin of victims of terror killings and promised stern action against those who disrupt peace, while reiterating that elections would be held after the delimitation exercise which will be followed by restoration of statehood. 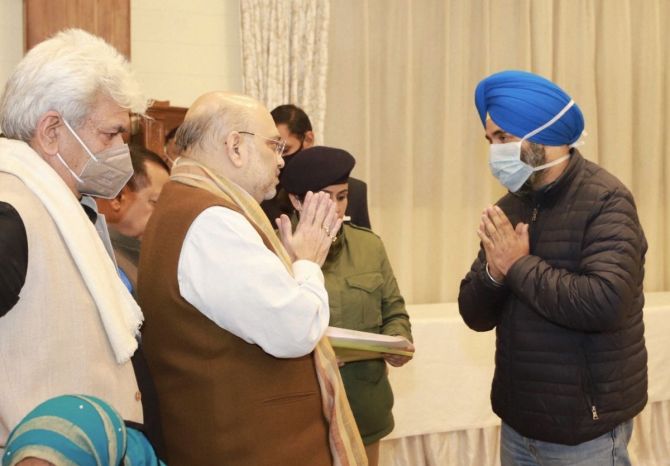 Terrorism decreased, corruption and dynastic politics ended and an era of peace, development, prosperity started on August 5, 2019, said Shah as he reached out to the youths in the Valley urging them to stand up to disruptive elements and become ambassadors of peace.

Shah started his busy day with a visit to the residence of slain police officer Inspector Parvaiz Ahmad Dar and gave orders for a government job to his wife Fatima Akhtar.

He also met the families of nine victims of recent terror attacks including Makhan Lal Bindroo, a Kashmiri Pandit and the owner of a popular medical store in Srinagar, and school principal Supinder Kour.

Shah, who is visiting the Valley amid a spurt in killing of civilians including non-locals by terrorists, chaired a security review meeting during which he was informed about the steps taken to eliminate terrorism from the Valley, officials said.

Addressing youth clubs, the home minister said he has come to seek support of youths of Kashmir in realising Prime Minister Narendra Modi's vision of a peaceful and developed Jammu and Kashmir.

"I have come here to forge friendship with the youth of Kashmir. Join hands with Modi ji and the government of India and become partners in the journey to take Kashmir forward," Shah said

A new beginning has been made in Kashmir, ending panic, terrorism, fear, corruption, nepotism and new era of peace, development, prosperity and coexistence has begun, he said.

Shah said some people used to claim that terrorism will increase in Kashmir but it has reduced and stone pelting is not seen anymore.

"We will deal strictly with those who want to disturb the peace of Jammu and Kashmir.

"It is our commitment that no one will be able to stop the journey of development," Shah said addressing the gathering at SKICC in Srinagar.

Shah said that some of the local politicians were creating hurdles in completing the process of delimitation.

"Those who are making a noise are doing so because jamhooriyat (democracy) has come out of the custody of three families and it now belongs to the poor," he said.

The home minister said he has made a promise in Parliament that the statehood of Jammu and Kashmir would be restored after the assembly elections.

"Elections will happen. (Politicians from Kashmir want that the) Delimitation be stopped. Why? Because it hurts their politics. Now, such things will not stop in Kashmir.

"The youth of Kashmir will get opportunities, so a right delimitation will be done, which will be followed by elections and then the status of the statehood will be restored. I have said this in the country's Parliament and this is the roadmap," he said.

"About 40,000 people, including civilians and security forces, have lost their lives. Do we have to stop this or not? Are terrorism and development possible together? No, it can never happen. The first condition for development is peace," he said.

"Who will take this (terrorism) out? The government? No. The government can only make attempts but the members of youth clubs have the responsibility to take terrorism out. You have to become the ambassadors of peace and development and spread this message across J-K that this is not the path to take our lives forward. This cannot be.

"I can give an answer to those talking about Pakistan, but I have not come here for that. I have come to talk to my young brothers and sister. Pak-occupied Kashmir is nearby, compare that with our J&K even though we are not satisfied with the development here. What have they got except poverty and darkness?" he asked.

The Union Home Minister said there were several opportunities for the youth of Kashmir now and he has come to seek their support.

"Make democracy stronger here, let the youth respond to the elements who try to make people go astray," he said.

The home minister said a day will surely come when Kashmir becomes a state that will give, not the one that takes, by contributing to the development of India.

"This responsibility rests with the youth of Jammu and Kashmir. Could the youth of Kashmir even think of becoming a minister, Vice President or President of this country before 5th August 2019?

"What did 70 years of jamhooriyat give, 87 MLAs, six MPs and three families, but Modi has given 30 thousand elected representatives in such a short time," he said.

He also made it clear that the government will not allow anyone to create hurdles in the path of peace in Kashmir.

"Rest assured, the developmental journey in Kashmir will not stop, and no one will stop Jammu and Kashmir from becoming an ideal state with respect to development, peace, infrastructure and prosperity," he added.

The home minister said corruption has decreased in Jammu and Kashmir and people are now getting direct benefits of government schemes.

"This transparency and elimination of corruption is the foundation of the development of Jammu and Kashmir. Corruption had hollowed out the roots of Jammu and Kasmir like termites and Prime Minister Narendra Modi has ended this menace," he said.

The home minister also flagged off the inaugural Srinagar-Sharjah flight -- the first direct international Airlink between the valley and the outside world.

The home minister, who is here on a three-day visit, was received at the technical airport here by Lt Governor Manoj Sinha and advisor Farooq Khan.

It was a day of heavy rain and snow in several parts of the Valley. If the weather holds, he will visit Jammu on Sunday to address a public rally and return to Srinagar, the officials said.

After meeting the family members of Parvaiz Ahmad, who was shot dead by terrorists on June 22 near his home in Nowgam on the outskirts of Srinagar while he was returning after offering evening prayers at a mosque, the home minister said, "I and the nation are proud of his bravery. Jammu and Kashmir Police is making all efforts to realise the vision of PM Modi for a new J-K".

This is his first visit since Jammu and Kashmir's special status under Article 370 was revoked on August 5, 2019, and the state bifurcated into the union territories of Jammu and Kashmir, and Ladakh.

Security was beefed up across Kashmir ahead of Shah's visit and additional forces have been deployed, particularly in the city, officials said.

50 companies of paramilitary forces, about 5,000 troopers, are being inducted into the Valley as a precautionary measure.

Bunkers manned by the Central Reserve Police Force (CRPF) troops have come up in several areas of Srinagar as well as in other parts of Kashmir valley, the officials said.