A day ahead of Amit Shah's virtual rally to sound Bharatiya Janata Party's poll bugle in Bihar, Rashtriya Janata Dal leader Tejashwi Yadav on Saturday said electioneering amidst the coronavirus crisis in the country is nothing but "political vulturism", and alleged that the saffron party was only interested in electoral victory even at the cost of human lives. 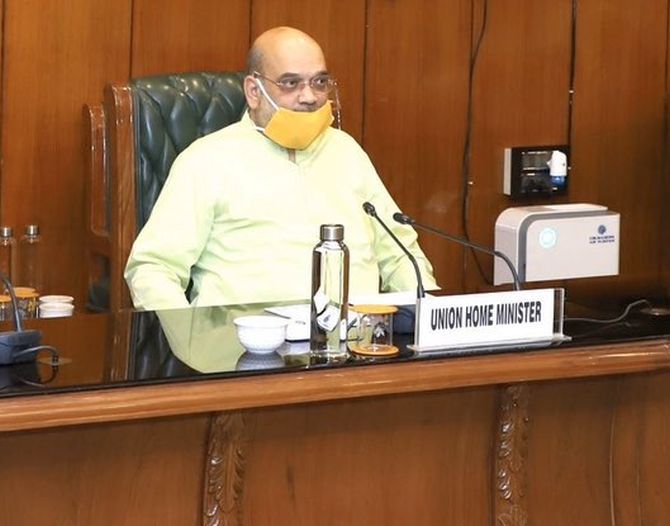 The Leader of Opposition in the Bihar assembly also accused the Nitish Kumar-led National Democratic Alliance government of meting out "step-motherly" treatment to migrant labourers and asserted that this would be a major issue in the assembly polls slated for later this year.

In an interview to PTI, Yadav said he is hopeful that all like-minded parties who are driven by the same ideology of pro-constitutional supremacy and pro-poor would come under one umbrella and fight the "divisive and a failed government of 15 years" in the state.

He also dismissed reports of cracks in the opposition alliance, saying that having "contrarian views" is healthy for any democracy.

His remarks come a day before the Rashtriya Janata Dal is set to observe ''Garib Adhikar Diwas'' that was announced to counter Shah's rally on June 7 in which the home minister will address the people of the state through video conferencing and Facebook live, given the COVID-19 guidelines and restrictions.

The BJP will sound the poll bugle in Bihar with the virtual rally by the Union minister and party's senior leader Shah who will address the people of the state through video conference and Facebook live, state BJP president Sanjay Jaiswal said, adding the party has set a target of roping in "at least one lakh people across the 243 assembly segments in Bihar" for the event, besides those who may prefer to listen to the speech on the social networking site.

On party's 'Garib Adhikar Diwas' event, Yadav had tweeted that in this calamity, the government has kept the plate of farmers and labourers empty, so in retaliation to their insensitivity, on June 7, RJD will awaken the government by beating "thalis-katoras (plates-bowls)".

The RJD campaign is reminiscent of Prime Minister Narender Modi's call to the people to beat 'thalis' in honour of corona warriors on the day of Janata curfew on March 22.

"This virtual election rally (of the BJP) amidst the crisis of the century that has crippled the health infrastructure, and spread of the disease has reached community level in the state, speaks volumes about the priorities of the BJP," Yadav said.

"Electioneering at this juncture is nothing but political vulturism. Rather than helping the poor, needy and migrants, they want to win elections even at the cost of human lives," the former Bihar deputy chief minister said.

Welfare of the people has been abandoned by NDA governments both at the Centre and in Bihar, he alleged, asserting that saving lives is more important than forming governments.

Asked if the plight of migrant labourers from Bihar will be raised during electioneering, Yadav said the Nitish Kumar government has neglected the migrant workers.

"On May 29, the Bihar government issued a letter to district SPs which read that with migrant workers returning, the incidents of loot, dacoity and crime will increase as the government will not be able to provide them with employment," the RJD leader said.

"In a way, the government said migrant workers are criminals. Biharis are 'swabhimani', and the neglect and humiliation by the Nitish government will definitely be a poll issue put forth by the general public themselves," the 30-year-old leader said.

This government has failed to perform its duties and it has completely let down the electorate, he said, and claimed that for the "first time in history" any state government has left its people to fend for themselves.

"It's only the Bihar CM who didn't allow migrant labourers to come back, didn't provide food to those stranded and even refused to pay for their train tickets whereas our alliance government in Jharkhand led by Hemant Soren airlifted stranded people," Yadav said

Asserting that it took a humanitarian crisis like COVID-19 to expose Kumar's "apathetic and inhuman attitude", Yadav alleged that those who follow his politics know that he is "anti-poor, anti-migrants, anti-farmer, anti-youth and anti-common man, and has always been discriminatory and inhuman towards them."

Asked whether the assembly elections slated for October-November could be held on time, given that the coronavirus pandemic was not showing any signs of abating, Yadav said it is for the Election Commission to decide.

"It is the EC's prerogative as to when and how it wants to conduct elections keeping in mind constitutional obligations and procedural laws. But one thing I would like to say is that people of Bihar are desperate like never before to change the government," Yadav said.

The BJP, the Janata Dal-United and the Lok Janshakti Party are part of the NDA in the state and are likely to be challenged by the alliance of the RJD and the Congress besides some smaller parties in the assembly polls.

In the 2015 assembly polls, the NDA had lost badly to the grand alliance of the RJD-JDU-Congress but Kumar broke ties with his allies in 2017 and entered the saffron alliance again after a gap of over four years.