Poachers shoot at rhino in Assam, take away horn

Poachers shot at a female rhino and sawed off its horn in upper Assam's Golaghat district on Wednesday morning, leaving the heavily bleeding pachyderm that had strayed out of flood-hit forest struggling for life.

The poachers fired upon and seriously injured the rhino and then sawed off its horn and also chopped off a part of its right ear in the Karbi Anglong hills across Kaziranga National Park, Divisional Forest Officer Dibjodhar Gogoi told PTI.

Veterinarians are attempting to save the rhino that is struggling for life, the DFO said.

The rhino had last night strayed out of the flood-hit forest on Tuesday night. A search operation was launched till midnight to guide it back.

Gun shots were heard early morning and upon searching east division of Karbi Anglong hills the animal was found in an injured state, Gogoi said.

Protesting against the incident, locals along with activists of All Assam Students Union (AASU) and Asom Jatiyatabadi Yuba Chatra Parishad (AJYCP) blocked the National Highway 37 passing along Kaziranga Park. 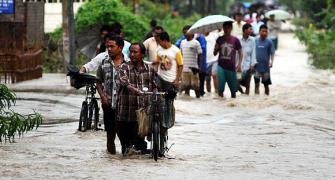