Noisy protests disrupted the both houses of the Parliament on the first day of the second part of the budget session. 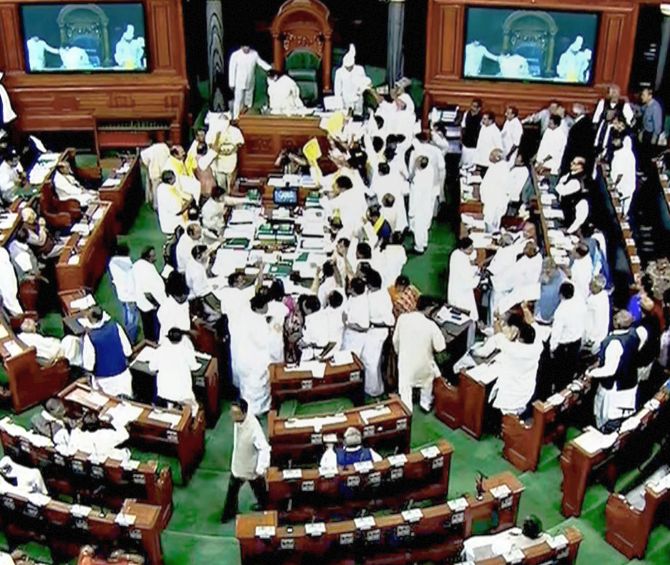 The Lok Sabha was adjourned for the day after unrelenting protests by the opposition Congress over the Rs 12,700 crore Punjab National Bank scam, and demands by the Telugu Desam Party for a special package for Andhra Pradesh.

On the first day of the second-leg of the budget session, the House witnessed uproar as Congress, TDP, Telangana Rashtra Samithi as well as All India Anna Dravida Munnetra Kazhagam members trooped into the well.

As the House reassembled, Congress members trooped into the well with placards demanding a reply from the prime minister on diamantaire Nirav Modi's whereabouts.

Trinamool Congress members too were seeking to raise the same matter.

Nirav Modi is the alleged kingpin of the Rs 12,700-crore fraud at Punjab National Bank. The fraud came to light last month after the country's second largest state-run lender PNB reported that it has detected fraud in award of LoUs to the designer diamond jewellery maker.

TDP members protested in the well demanding special package for Andhra Pradesh while those from the TRS sought increase in reservation quota in Telangana.

Amid vociferous opposition protest, Mahajan said she had received the resignation letter of Neiphiu Rio from the Lok Sabha following the Nagaland assembly election results.

"I have accepted his resignation with effect from February 22," Mahajan said.

Before the beginning of the proceedings of the House, BJP members were seen clapping when Prime Minister Narendra Modi walked into the House. With folded hands, Modi greeted the members as well as those in the Opposition benches.

As the BJP and its allies captured power in the three North Eastern states, many of the saffron party MPs were seen wearing Assamese 'gamosa'. 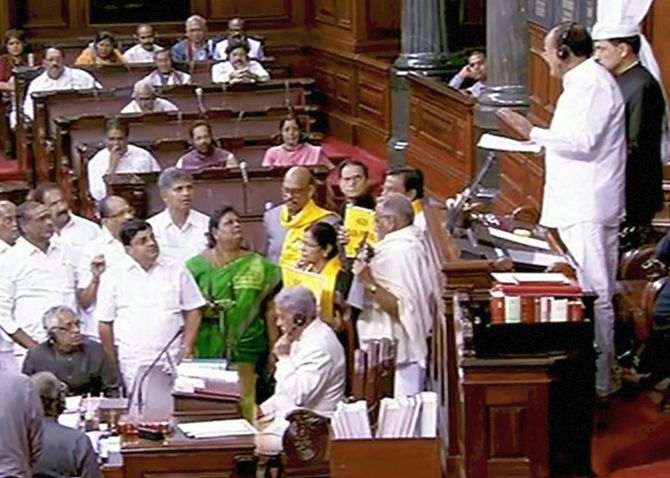 The Rajya Sabha too was adjourned for the day amid uproar by the opposition over the Rs 12,700-crore PNB scam and other issues including NDA-ally TDP demanding special package for Andhra Pradesh.

As soon as the Upper House met at 2 pm after witnessing two quick adjournments of proceedings in the first half of the day, members from opposition parties trooped into the well creating a ruckus over issues ranging from the Rs 12,700 crore alleged fraud by fugitive jeweller Nirav Modi, to constitution of the Cauvery Water Management Board.

Amid slogans by the opposition like "Nirav Modi wapas lao" (bring back Nirav Modi), Deputy Chairman P J Kurien who was in the chair stood on his feet and urged members with folded hands to allow proceedings.

However, noisy protests continued amid Kurien's remarks that "You are all agitated on separate issues. I know each subject is very important."

Kurien said if members allow, a short duration discussion can be held on frauds in public sector banks and after that different issues could be taken one by one.

He said for today, he has given permission to conduct a debate on frauds in public sector banks.

Stating that it was "indiscipline", Kurien asked Leader of the opposition, Ghulam Nabi Azad whether the opposition will allow a discussion, to which the Congress leader said that if other parties are ready, they have no objection.

Azad further said the government and the prime minister had "failed" and banks are without money while likes of Nirav Modi were absconding.

Kurien then adjourned the House for the day.

Earlier proceedings were disrupted twice and the House saw two adjournments - first for 10 minutes and then till 1400 hours.

While the Trinamool Congress led the charge against India's biggest bank fraud, Tamil parties -- the AIADMK and the DMK -- came together to demand implementation of the court order on constitution of the Caurvey Water Management Board.

The TDP and a Congress member demanded implementation of the promise to give special status to Andhra Pradesh after Telengana was carved out of it.

AIADMK, DMK, TMC, TDP and KVP Ramachandra Rao of Congress rushed into the well of the House, raising slogans on their respective issues.

Earlier Chairman M Venkaiah Naidu first adjourned the proceedings for 10 minutes and then till 1400 hours when similar scenes were repeated on reassembly despite his assurance to members that discussions on issues would be allowed under appropriate rules.

When the House reassembled after the first adjournment, Naidu was able to persuade members to return to their seats for a shortwhile.

Stating that he has received notices from several members under Rule 267 requiring listed agenda to be set aside to take up discussion on the issue being raised, Naidu maintained that the issue of fraud at Punjab National Bank was very important and the House needs to discuss.

"This is agitating the minds of the people," he said.

He, however, said he cannot accept the notice under Rule 267 given on the issue by Leader of the Opposition and senior Congress leader Ghulam Nabi Azad, party's deputy leader Anand Sharma, Pramod Tiwari, D Raja (CPI), Sukhendu Sekhar Roy (TMC) and others.

A discussion on the issue can be allowed under Rule 176.

The Rule 176 of the Rules of Procedure and Conduct of Business in Rajya Sabha allows raising of matters of urgent public importances through a short duration discussion but without a formal motion or voting.

Naidu said he will need to discuss with the government and the Leader of the House the issue of allocation of time before allowing a discussion on the issue.

On the notices given by Tamil parties over the Cauvery water matter, he said he would allow the matter to be raised as a zero hour mention.

To TDP and Rao, he said the issue had been discussed before and if they wanted a further discussions they could give a notice under proper rules or raise it during the debate on the Union Budget for 2018-19.

Naidu also said he has received a notice under Rule 267 from Vinay Sahasrabuddhe (BJP) over alleged corruption by relatives of a former minister. "That is also important but I am not allowing it as 267. Give notice under appropriate rules," he said.

But the members were not satisfied and rushed into the well. TMC members shouted slogans for bringing back Nirav Modi, the alleged mastermind of the fraud at PNB, while Tamil parties raised slogans on the Cauvery issue.

TDP and Rao stood in the well holding posters in support of their demand for a special package for Andhra Pradesh.

"You are in Parliament. Don't create hungama (ruckus). Don't lower the dignity of the House," Naidu said. "This is not the way."

He said no posters should be displayed and warned of action against violators.

"Members seem determined to disrupt," he said before adjourning proceedings till 2 pm.