PM's rally in Kolkata on Sunday, suspense over Mithun's presence

Prime Minister Narendra Modi will sharpen Bharatiya Janata Party's campaign for the high-octane assembly elections in West Bengal with a mega rally at the Brigade Parade Grounds in Kolkata on Sunday. 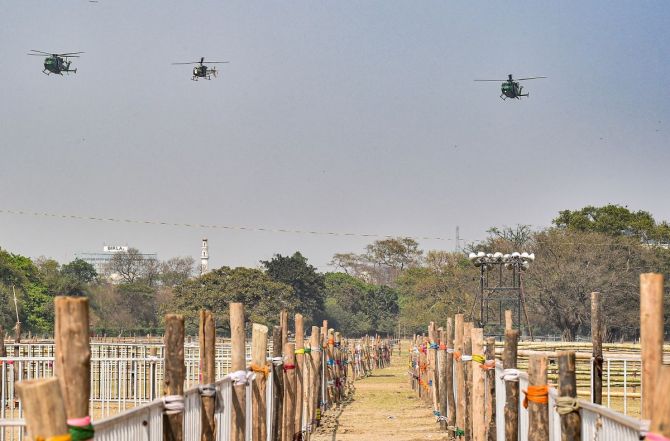 The prime minister's Sunday rally is said to be culmination of the 'Parivartan Yatra' launched by the saffron party in the poll-bound Bengal in February this year.

"Prime Minister will set the tone of the election campaign with a rally at Brigade grounds," a BJP leader said.

Sunday's rally will be the first major event of the saffron party in West Bengal after declaration of eight-phase elections in the state.

The BJP has planned to make it a grand success with a record crowd presence which the iconic ground has never witnessed.

The BJP which was scheduled to come out with the candidate list for the first two phases on Friday had decided to postpone it for the brigade rally.

"We have decided to postpone the release of the candidate list for the brigade rally. Once it is over, we would come out with our list," BJP leader Rahul Sinha said.

Along with Modi several top senior BJP leaders will be present at the rally.

According to BJP sources, the rally might also throw up surprises as a few noted personalities including Bollywood actor Mithun Chakraborty might be present on the dais.

"He may be present at the rally tomorrow. Let's see what happens," a senior BJP leader said.

BJP national general secretary Kailash Vijayvargiya, however, said nothing has been discussed regarding Chakraborty's joining the saffron camp.

Once considered close to the Communist Party of India-Marxist, Chakraborty was Rajya Sabha MP for the Trinamool Congress for few years, before resigning expressing desire to quit politics.

The BJP has gone all out to campaign for the rally launching innovative campaigns, from social media to the streets.

The party activists have been hosting flash mobs over the past few weeks at several locations across the state, including busy traffic intersections and crowded localities to rally a large number of people at the Sunday event.

After having a limited presence in the politically polarised state for decades, the BJP has emerged as the ruling Trinamool Congress's main rival by winning 18 of the 42 Lok Sabha seats in West Bengal 2019 general elections, only four less than TMC's tally of 22.

With the BJP's strength increasing in the state in the last few years, its leaders are upbeat that the party will end Chief Minister Mamata Banerjee's 10-year rule in the state polls.

Elections for the West Bengal assembly will be held in eight phases beginning with polling for 30 seats on March 27.

Congress-Left Front-Indian Secular Front of the Muslim cleric Abbas Siddiqui have joined hands to challenge the TMC as well as the BJP in the battle for Bengal.