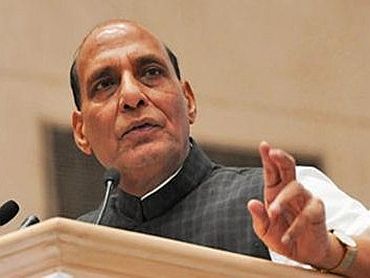 Union Home Minister Rajnath Singh on Saturday said that he was taken by surprise to hear that Prime Minister Narendra Modi had decided to meet his Pakistani counterpart Nawaz Sharif in Lahore on his way back to Delhi from Kabul.

"Yesterday, our prime minister made a surprise visit to Lahore while he was on his way to Delhi from Kabul. We were all surprised, as it was not a planned visit. But whatever he (PM Modi) did was commendable. Perhaps it has never been observed, this type of diplomacy, around the world," Rajnath said, while addressing a public meeting in Lucknow on Saturday.

Rajnath also said that after former prime minister Atal Bihari Vajpayee, it is Modi who has raised dignity of India in front of the world.

"In independent India, after Atal Bihari Vajpayeeji, if there is someone who has made the country proud and raised the dignity of the nation in front of the world, it is Narendra Modi," he said.

In a surprise move which was termed as 'birthday diplomacy', Modi landed in Lahore on his way back from Kabul on Friday afternoon. The public announcement of his visit was made by a tweet that the PM put out towards the end of his stay in Kabul.

People on the social media hailed the prime minister's move as a significant development in the relationship between the two South Asian neighbours, even though the Opposition criticised it saying that the cost of his meals would be paid by the country in terms of national security.

A 'transformative moment' in the subcontinent: BJP

Calling Modi's surprise visit to Pakistan a 'transformative moment' in the subcontinent, the Bharatiya Janata Party said it has provided yet another opportunity to write a new chapter in the difficult Indo-Pak relationship and rejected Congress' criticism as 'childish'.

The party hailed Modi for his 'courage, vision, skill and imagination', saying pursuit of peace in the complex region with its history of fraught ties between the two countries required such courage.

BJP spokesperson M J Akbar also noted that it required 'two authors reading from the same page' to write a new chapter while asserting that the peace process between the two neighbours has been revived in an 'extraordinary' manner.

Warm personal relation between Modi and his Pakistan counterpart Nawaz Sharif is ‘symptomatic’ of the 'diplomatic thaw' that has taken place, he said.

The Jammu and Kashmir BJP too welcomed Modi's visit to Pakistan saying it shows his sincere commitment to bring peace in the Indian sub-continent and the world.

"We welcome the surprise visit of Prime Minister Narendra Modi to Pakistan. Modi stopping over at Lahore and visiting the ancestral home of Pakistan Prime Minister Nawaz Sharif is the beginning of new era of friendship between India and Pakistan," state BJP spokesman Khalid Jehangir said.

He said Modi's daring visit to Pakistan has left the opposition parties dumbfounded.

"We hope Pakistan will reciprocate the prime minister's gesture so that both the countries write a new chapter in the history of Indo-Pak relations," Jehangir added.