Pakistan cannot weaken India by orchestrating attacks and those responsible will pay a 'very heavy price', Prime Minister Narendra Modi warned on Friday as echoes from the Pulwama terror strike rang across the country with families awaiting the bodies of their loved ones in coffins wrapped in the tricolour. 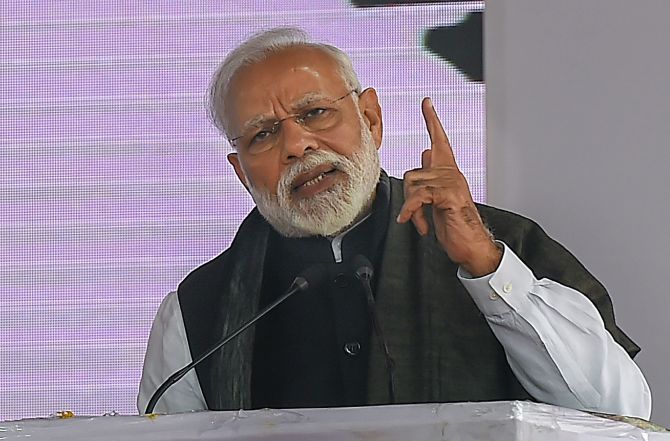 Security forces will be given a free hand to deal with terrorists, the prime minister said, a day after 40 Central Reserve Police Force soldiers were killed when a suicide bomber rammed a vehicle laden with explosives into their bus in Jammu and Kashmir's Pulwama district.

The Pakistan-based terror group Jaish-e-Mohammed has claimed responsibility for the attack on the convoy of 78 vehicles that was on its way from Jammu to Srinagar.

All efforts would be made to isolate Pakistan, Finance Minister Arun Jaitley said.

Making it clear that India means business, the Cabinet Committee on Security, which met on Friday morning, decided to withdraw Most Favoured Nation status to Pakistan.

It would enable India to increase customs duty on goods coming from the neighbouring country.

India granted MFN status to Pakistan way back in in 1996, but it has not yet reciprocated.

In a hard-hitting speech at the launch of the Vande Bharat train 18 in New Delhi, Modi said the 'blood of the people is boiling' and forces behind the act of terrorism will definitely be punished.

"Security forces have been given complete freedom, the blood of the people is boiling...Our neighbouring country, which has been isolated internationally, thinks such terror attacks can destabilise us, but their plans will not materialise," Modi said.

Addressing a public meeting in Jhansi later in the day, the prime minister again did not name Pakistan but said the attack was an outcome of its desperation as it is in a bad shape and has been forced to go to different countries with a 'begging bowl' to meet even its daily expenses.

Asserting that the sacrifices of CRPF soldiers will 'not go in vain', he said, "Security forces have been given permission to take decisions about the timing, place and nature of their response... This is an India of new convention and policy."

Briefing reporters after the CCS meeting, which is unusual, Jaitley said all efforts will be made to ensure that perpetrators of the attack are brought to book.

Jaitley said the Ministry of External Affairs will launch an all out effort to isolate Pakistan and all diplomatic efforts will be launched in this regard. 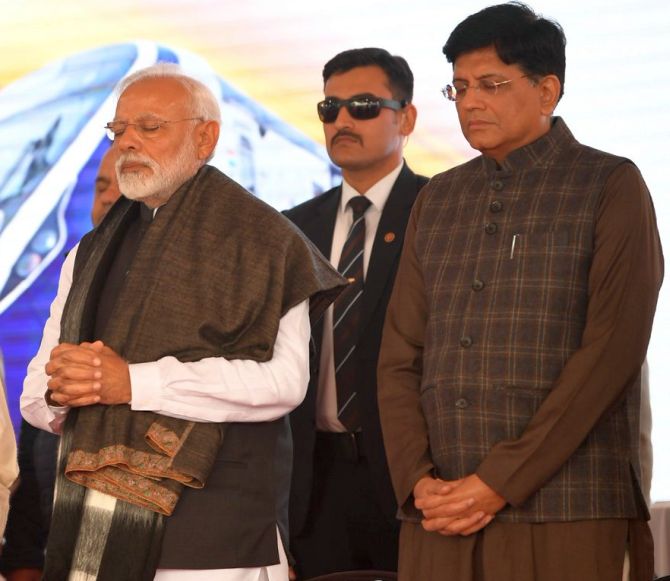 Describing the terror assault as an attack on India's soul, Congress president Rahul Gandhi said his party as well as the entire opposition was fully supportive of the government and the security forces.

"I want to make it very clear that the aim of terrorism is to divide this country and we are not going to be divided for even one second, no matter how hard people try," he told reporters.

As the government and politicians reacted to the attack and the families of those killed came to grips with the enormity of the tragedy, Union Home Minister Rajnath Singh travelled to Srinagar and laid a wreath on the mortal remains of the troops.

The remains of the 40 CRPF personnel, many of whom were returning from leave to rejoin work in the Valley, were kept in coffins, draped in the tricolour, ready to make their final journey home.

Singh gave a shoulder to the coffin of one the jawans killed.

"The nation will not forget the supreme sacrifice of our brave CRPF jawans," Singh said.

As if in echo, the younger brother of V V Vasanth Kumar, who had left his home in Kerala's Wayanad district on February 8 and was one of those killed, said his sacrifice would never be forgotten.

"My elder brother died for the country and we are proud of his sacrifice," Sajeevan told PTI.

Vasanth Kumar's mother Shanta and wife Sheena are inconsolable and his two young children have not yet been informed.

Their grief found resonance in 39 other homes across the country.

Protests against Pakistan broke out in several parts, including in Jammu city where curfew was imposed.