News
Business
Movies
Sports
Cricket
Get Ahead
Money Tips
Shopping
Sign in  |  Create a Rediffmail account
Rediff.com  » News » PM to address Maldivian Parliament, 1st to do so in 78 years

PM to address Maldivian Parliament, 1st to do so in 78 years

Prime Minister Manmohan Singh will address the Peoples' Majlis in Male next week during his visit to the South Asian Association for Regional Cooperation Summit, making him the first foreign head of government to address the Maldivian Parliament in its 78-year-old history.

Official sources told PTI that Speaker of the Peoples' Majlis Abdullah Shahid has sent a formal invitation to the prime minister to address the Majlis during his official visit to Maldives for the two-day SAARC Summit on November 10-11, which has been accepted.

Shahid has mentioned in the letter that the proposal to invite Dr Singh was approved unanimously in the Majlis, which has 77 members, and that the Indian prime minister's address would be means to strengthen ties between the two countries, they said.

This will be second time Dr Singh has been honoured to address any country's Parliament for the first time. The prime minister had earlier addressed joint session of Afghan Parliament during his visit there in May. 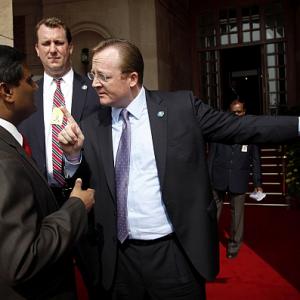