'PM said we are committed to restoring J-K's statehood'

What the leaders said after the all-party meeting called by Prime Minister Narendra Modi in New Delhi on Thursday. 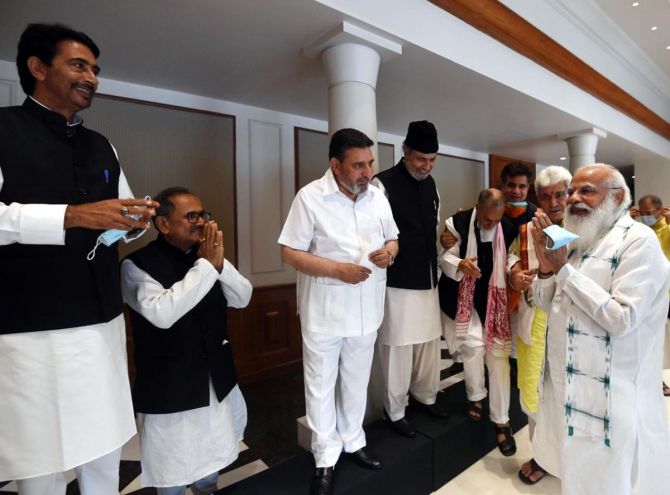 Today’s meeting with political leaders from Jammu and Kashmir is an important step in the ongoing efforts towards a developed and progressive J&K, where all-round growth is furthered.

Our priority is to strengthen grassroots democracy in J&K. Delimitation has to happen at a quick pace so that polls can happen and J&K gets an elected Government that gives strength to J&K’s development trajectory.

Our democracy’s biggest strength is the ability to sit across a table and exchange views. I told the leaders of J&K that it is the people, specially the youth who have to provide political leadership to J&K, and ensure their aspirations are duly fulfilled.

Today’s meeting on Jammu and Kashmir was conducted in a very cordial environment. Everyone expressed their commitment to democracy and the constitution. It was stressed to strengthen the democratic process in Jammu and Kashmir.

We are committed to ensure all round development of J&K. The future of Jammu and Kashmir was discussed and the delimitation exercise and peaceful elections are important milestones in restoring statehood as promised in Parliament.

This is a positive effort towards giving development & strengthening democracy in J&K. The meeting was held in a conducive atmosphere. Everyone showed their loyalty towards India's democracy and the Constitution.

The home minister told everyone about the current status and improving the situation of J&K. the PM listened to every point of the leaders with full seriousness and appreciated them for putting their thoughts with open mind.

The PM laid special emphasis on two main issues in meet. He said we'll have to work together to take democracy to grassroots in J&K. Secondly, for all-round development in J&K that reaches all communities and areas, there should be cooperation.

The next important step in the democratic process in J&K is assembly polls and we've to move to it together. For this, delimitation process will have to be completed swiftly so that all sections get proper political representation in Assembly.

There is a loss of trust which needs to be restored immediately and for that, to begin with, the Centre should work for restoration of complete statehood to Jammu and Kashmir.

I conveyed to the prime minister that the statehood means reverting even the IAS and IPS cadres of Jammu and Kashmir. The state has to be in totality.

Almost 80% of the parties spoke on Art 370 but the matter is sub judice in court. Our demands included full-fledged statehood soon, elections to restore democracy, rehabilitation of Kashmiri Pandits, all political detainees to be released& land, employment guarantee.

The people of J&K are in a lot of difficulties after August 5, 2019, when Article 370 was rescinded. They're angry, upset and emotionally shattered. They feel humiliated.

I told the PM that the people of J&K don't accept the manner in which Article 370 was abrogated unconstitutionally, illegally and immorally.

The people of J-K will struggle constitutionally, democratically, peacefully. Be it months or years, we'll restore Article 370 in J-K as it's a matter of our identity. We didn't get it from Pakistan, it was given to us by our country, by Jawaharlal Nehru, Sardar Patel.

We told the prime minister that we don't stand with what was done on August 5, 2019. We're not ready to accept it.

But we won't take the law into our hands. We will fight this in court.

We also told the PM that there's been breach of trust between the state and Centre. It's the Centre's duty to restore it.

We requested the PM that our fight will continue but it's essential to reverse some decisions that aren't at all in the interests of J-K.

It was given the status of a Union territory, and the people don't like it. They want full statehood for J-K with J-K cadre restored.

All leaders in the meeting demanded full statehood for J-K. Both PM and the home minister said the work for elections and restoring statehood should start soon. Ghulam Nabi Azad sahib said that first statehood should be restored and then elections should be held. On this the PM didn't say anything.

The prime minister and home minister heard our concerns, demands and aspirations today but we did not get any concrete assurances from them.

Almost all political parties came to a consensus that there should be peace in J&K and a government should come there democratically. The PM appealed to all the leaders that there would be peace only when everyone works together.

Delimitation will be done and after this, further process will be undertaken. Delimitation Commission will hold discussions with everyone, after that things will move forward.

The meeting was held in a very cordial manner. We came out quite positive that hopefully there will be some delivery for the people of Jammu and Kashmir.

The talks were held in a good atmosphere. The prime minister heard our issues of all leaders. The PM said that election process will begin when the delimitation process finishes.

The PM asked all to participate in the delimitation process. We have been assured that this is the roadmap towards elections. The PM also said that we are committed to the restoration of statehood.

It was a good meeting, a good initiative. The prime minister heard all leaders. In response to them, he said, "let us move ahead”.