India's fight against the novel coronavirus pandemic is people-driven, Prime Minister Narendra Modi has said, attributing the success against the contagion to the nationwide lockdown implemented in the initial phase. 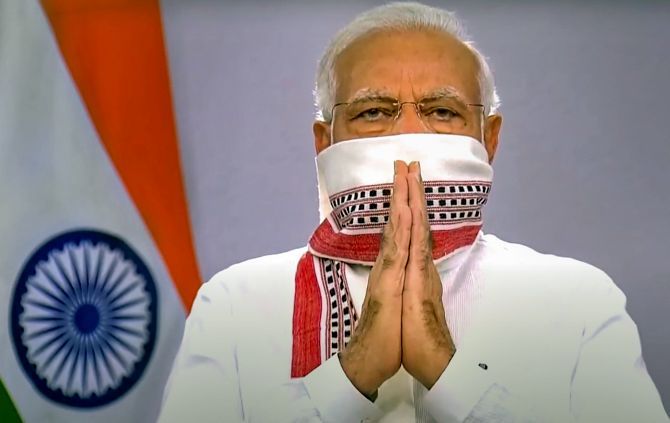 In his virtual address to the American Association of Physicians of Indian Origin on Saturday, Modi said the COVID-19 outbreak had been used as an opportunity to work towards making India self-reliant.

This is for the first time that an Indian prime minister addressed the annual meeting of the AAPI, a representative body of more than 80,000 Indian-American doctors in the United States.

Sharing the statistics of various countries, Modi said India has performed much better in the fight against the coronavirus.

"As against the death rate of 350 individuals per million in the US and over 600 per million in European nations like the UK, Italy and Spain, the rate of fatalities in India is less than 12.

"Uttar Pradesh has been remarkably successful in fighting against the coronavirus. And same is the case with several other states as well,” Modi said.

The prime minister attributed this to the support from the people of the country. "Rural parts of the country have largely remained untouched from this pandemic," he said.

Without people's cooperation, Modi said, the success would not have been possible in the world's second-most populated country -- with high density, where social gathering is a norm of life, large religious and political gatherings and large-scale interstate migration are regular.

India defied the fears of the world's topmost experts on the COVID-19 pandemic, according to Modi.

India has been able to save the lives of thousands and lakhs of its citizens because of the timely lockdown, he told the Indian-American physicians.

Prime Minister Modi announced a complete lockdown across the country for 21 days from March 24 midnight. The lockdown has been extended since then with the government allowing some sectors to reopen in a phased manner based on the threat-level of each area.

Modi said the COVID-19 pandemic has been used as an opportunity to improve the healthcare facilities. For instance, at the start of the coronavirus, there was only one COVID-19 testing laboratory. Now there are 1,000 laboratories.

He underlined that India, which imported most of its personnel protection equipment kits at the start of the pandemic, is now almost self-reliant and in a position to export them.

The country is making more than 30 lakh N95 masks per week. More than 50,000 new ventilators are being made available to the healthcare sector, all made inside the country, he added.

Modi said he was proud of the achievements and contribution of the Indian-origin physicians across the world in the battle against the COVID-19.

India's ambassador to the US Taranjit Singh Sandhu echoed Modi and said that the early lockdown has helped delay the spread of the deadly virus and save lives.

Appreciating the role of the Indian-American doctors during the COVID-19, Sandhu said: "You are the real heroes who have risked your lives and have been out to assist others."

There is a widespread recognition of their contributions in the US, he added.

According to Johns Hopkins Coronavirus Resource Center, the contagion has infected over 9.9 million people and killed more than 498,000 across the world.

The US is the worst affected country with over 2.5 million cases and more than 1,25,000 deaths, while India has registered over 5 lakh cases with more than 16,000 fatalities.